This semester at Parsons, I have two things going on:

Currents: Building Worlds was originally pitched as an "introduction to Unity" class, but then the administration said that Parsons never conducts purely "software" classes. They suggested teaching Unity through some sort of theoretical lens -- and the class design is probably much better for it. So now, it's kind of an intro to Unity / C# / working with expressive 3D / architectural theory class, and it argues for "3D" as a unique expressive medium in itself. There's also a strong focus on discussing "behaviors" theoretically, and how to combine simple behaviors to produce some sort of emergence... whether that's what constitutes a "world." I think I'll assign a chapter of 10 PRINT as a reading? (The "Currents" prefix is like a disclaimer -- "This course is an experiment. Take it at your own risk.")

Datatoys is a collaborative class between journalists and design students to re-imagine journalism as a toy -- to turn data into interactive systems that demonstrate patterns of behavior. "Let's face it," began the journalism professor, "reading the New York Times is really boring. Print journalism is dying. Now, what is the journalism of the future?" What are the politics inherent in toys and play? How do we reconcile that with the ethics of journalism? If play is independent and unstructured, does that resemble how journalistic objectivity is independent? Can players act as journalists? How and when do toys lie?

The multidisciplinary nature of these two courses is what makes them conceptually strong and compelling, yet also very difficult to realize into actual designed things... But if they were easy, then they probably wouldn't be worth doing.
at 4:33 PM
Email ThisBlogThis!Share to TwitterShare to FacebookShare to Pinterest

Last time, I wrote about procedural narrative in the context of "process intensity." Here, I expand more on designing the procedural / process part.

Back in an expertly-conducted 2011 Rock Paper Shotgun interview, Dan Pinchbeck argued that game development culture unnecessarily separates narrative from the rest of a video game:


"I just want story to be talked about as a gameplay element that sometimes isn’t there. It’s part of the set of tools that a game designer uses to create an experience – and it should be thought of along the same lines, as physics or AI or something more mechanical."

We have physics engines or texture libraries, so why don't we think of narrative as a modular "asset" or "engine" or "library" to be swapped around as well? Why can't narrative be more "mechanical." Where's all the narrative middleware? (Storybricks doesn't seem to be doing too well, unfortunately. I also don't agree with them, that proc narrative is mainly an AI problem...)

read more »
at 10:10 AM
Email ThisBlogThis!Share to TwitterShare to FacebookShare to Pinterest 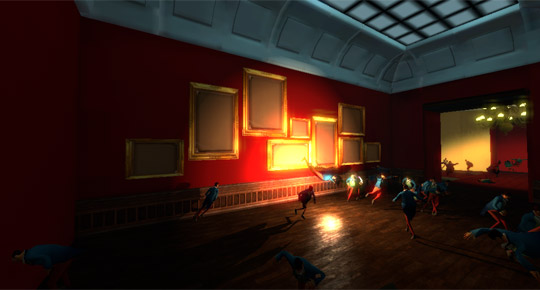 (lighting / color test with random NPC mobs)
Me and Eddie decided we should make a game this past / current weekend. It started with our usual process: clicking "random page" in Wikipedia until something strikes us. This time, we were struck by "The God in the Bowl," a Conan the Barbarian short story where Conan has to solve a murder (?) when he's actually there because he wants to rob the museum, but then a ghost kills a bunch of people?

Anyway, this concept resonated with us: an adventure-ish game where you must steal things and solve a case; you're a kleptomaniac detective in Victorian-ish London, and you're assigned to cases where you're actually the thief.

At some point, I think I forgot I was making a game. It became more like this expansive simulation of every possible reality, folding into itself; I caught myself wanting to make everything interchangable with everything else, to let every piece talk to another piece and act like yet another. Everything was a network, a graph, and every node was another network. Recursion upon recursion.

There's a tendency in game development to think that you will always be coding "the" framework you can re-use and re-use for everything. Everything should be modular, endlessly recyclable, endlessly useful. It's hard to let that go and accept that you should focus on making a game, first -- a game that works -- and not an engine or a library or something that'll change everything as we know it. I ended up forgetting the most basic lessons of making.

Convo felt too big, and it felt too big by 2/3. I had to cut 2/3. I don't know how I can quantify a fraction like that, but I thought about my ability to build and engineer and develop, within the timeframe I wanted, and decided it was overextended by at least 2/3. I've cut a bunch of stuff, but I'm not sure if the scraps on the floor -- do they add up? Is it enough? How do you know if you've cut too much? Is this what Peter Molyneux feels like?


at 6:04 PM
Email ThisBlogThis!Share to TwitterShare to FacebookShare to Pinterest

The unportalable: games as paratexts and products

Several years ago, I sat-in on a "games as literature" course, and promptly got into an argument with the instructor. We were talking about Portal, and he argued the dark metal unportalable surfaces seem "sinister" because of their color, rustiness, sense of alien materiality and permanence, lack of affordance, etc. (This was also an introductory course, so a lot of his effort went towards getting students to make critical arguments about games at all.)

I argued that interpretation was irrelevant, and that type of thinking was obfuscating how these surfaces actually function to players: in Portal you don't think to yourself, "that wall is scary," but you more often think "I can't portal there, let's look somewhere else" or "wow that wall looks cool on these graphics settings." To me, the wall material told more of a paratextual story rather than a diegetic story.

read more »
at 2:22 PM
Email ThisBlogThis!Share to TwitterShare to FacebookShare to Pinterest 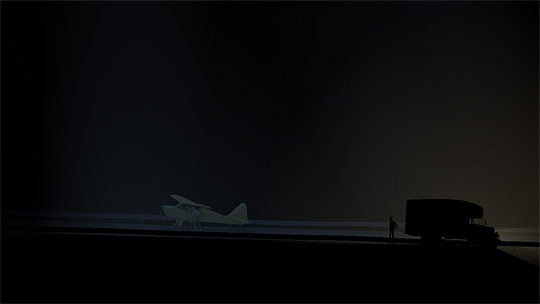 read more »
at 2:57 PM
Email ThisBlogThis!Share to TwitterShare to FacebookShare to Pinterest