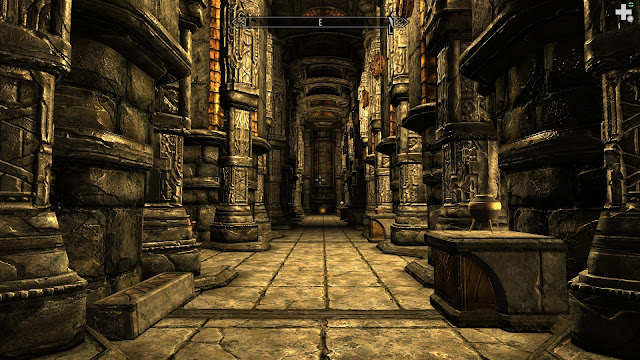 This post kind of spoils (but not really) some of the Skyrim quest mod The Forgotten City.

Bethesda open world RPG games have developed certain quest tropes. One trope is the conflicting stories quests like Two Sides of the Coin (Oblivion), In My Time of Need (Skyrim), and A Business Proposition (Elder Scrolls Online) which present two NPCs with conflicting stories and no real way to discern who is right, so you just have to pick a side and hope you feel good about it. Naturally, this provokes heated debates among fans, such as this epic two year 500+ post multi-thread argument about which NPC was ultimately truthful in Skyrim.

I heard about the popular Skyrim mod The Forgotten City after their E3 2018 retail remake announcement. After playing it, I think The Forgotten City exists within a different open world quest tradition of complex "dense quests" with many characters and possibilities in a small space. It reminds me a bit of Whodunit (Oblivion), Tenpenny Towers (Fallout 3), Beyond the Beef (Fallout New Vegas), and Diamond City Blues (Fallout 4)... the retail version of Skyrim conspicuously doesn't have any comparable dense quest, so The Forgotten City sort of fills this gap.

Me and my collaborators on The DreamboxXx project (the commission for my recent game Dream Hard) have launched a queer arcade bundle. In the tradition of past social justice oriented game bundles like Devs With Ferguson, the proceeds from this bundle will benefit local queer / trans / pro-immigrant nonprofits.


Most of these games are for two players, all can be played on the keyboard, and the majority are cooperative. Most of these games are also experimental, and don't really fit the standard idea of a traditional arcade game. These games include:
Most importantly, all these games were made by LGBTQ people to support their community! Proceeds from this bundle will go toward local social justice non-profits of each artist's choice, such as the Sylvia Rivera Law Project (local legal-aid organization serving low-income people of color who are trans, intersex, or nonbinary) and Make The Road New York (local grassroots organization dedicated to immigrant rights and working class communities)

We hope you consider donating toward these worthy causes, and thanks for everyone's support!

at 12:23 PM
Email ThisBlogThis!Share to TwitterShare to FacebookShare to Pinterest

This post spoils the gameplay and ending of my game Dream Hard.

In collaboration with local arcade collective Death by Audio Arcade, me and several other gay / queer artists made games for a Brooklyn queer arts space called The Dreamhouse. My contribution was a retro low polygon 3D brawler called Dream Hard. If you ever find yourself around the Bushwick or Ridgewood neighborhoods in New York City, you can play this (and many other queer games) on The DreamboxXx cabinet at The Dreamhouse.

While making this game, I was interested in what it means to appropriate a game genre with queer intent, and I wanted to figure out why the brawler genre would be a good fit for this kind of aesthetic. Some of my early prototyping and design direction is already covered in an earlier post. I wanted something that recognizably belonged to the arcade era, while staying fairly simple and accessible to a general audience.

Much of my personal memory of arcades focuses on big licensed beat 'em up games like the X-Men brawler cabinet or The Simpsons arcade tie-in. I also liked playing old 16-bit console games like Golden Axe II or Streets of Rage 2 on the Sega Genesis, but neither of those franchises exists today. Other than a few notable indie releases, the classic brawler game is mostly dead. I wanted to channel my nostalgia for these games toward The Dreamhouse.

read more »
at 12:00 PM
Email ThisBlogThis!Share to TwitterShare to FacebookShare to Pinterest 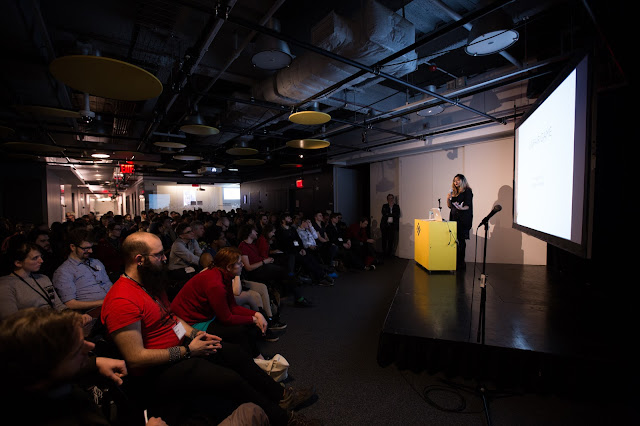 Hey all, just a quick reminder about PRACTICE 2018, a yearly eclectic game design conference put on by my employers and colleagues at NYU Game Center. It's happening very soon, during this coming weekend in New York City, June 21-23.

I go to stuff like GDC all the time, and I'm often frustrated by huge industry events' limitations -- they're huge crowded anonymous affairs that must cater to an entire field and assume a wide general audience, or they focus too narrowly on a technical detail without reflecting on deeper implications. At this point, GDC probably can't change itself very much, but what if there were a bunch of different events that could do what GDC can't?

So I think this is one way of making the game design conference we'd like to see in the world. The PRACTICE speaker lineup is tightly curated, seeking a variety of deep case studies as well as deep primers outside the niche world of video game design. Generally, there's usually at least one tabletop game design speaker and one sports design speaker, and this variety helps a lot. In the past, there's been professional poker players, race car data scientists, breakdancers, rock climbers, all going into the actual problems and examples they work with -- as well as AAA game designers talking about combat systems and indie developers talking about game feel. There are zero 101-level intro talks here.

Basically, this is a conference for working game designers who already kinda follow what's going on, but appreciate deep critical takes on what's happening. Unlike a lot of these types of events, the post-talk Q&A actually has some good audience questions and isn't terrible! It's also great if you want a more laidback environment where you can chat with everyone, instead of running to the next party and apologizing to the folks you missed.

If you live in the New York City area, I hope to see you there -- and if you live outside NYC, maybe you should look at some last minute airfare deals... and the city is especially lovely this time of year too, you know...

at 1:59 PM
Email ThisBlogThis!Share to TwitterShare to FacebookShare to Pinterest

Why I'm not super excited about Valve's new Steam policy

In case you haven't heard: Valve recently announced it won't attempt to moderate the content on Steam anymore except when legally required to, or when it's "obvious trolling", whatever that is.

On the face of it, this is supposedly a net-win for queer people and marginalized creators. Supposedly I'll be able to publish as much dick as I want! But after many years of dealing with platforms, and their intentionally vague policies and selective enforcement, I've grown extremely wary of these many public statements that promise to do better, and then never do. Even if this new policy is for real, I can easily imagine a future where Valve suddenly changes its mind to disallow my games -- I'm used to being treated as a "controversial" edge case in games, and all these companies have successfully trained me not to trust them or take their word for it.

There's a lot to unpack in Valve's post, and you can read a lot of different editorials all around the internet for the full scope of those ideas. Personally I'm not interested in regulating "spam games" or "asset flips", and my analysis will focus more on my experience and attitude in using Steam as a developer.

read more »
at 1:33 PM
Email ThisBlogThis!Share to TwitterShare to FacebookShare to Pinterest

I'm nearing the end of the remaster process for my shower game Rinse and Repeat, as part of a future re-release planned for late 2018. As I've said before: if you have the time and energy, I highly recommend remastering your games -- you get to revisit all the compromises and sacrifices you inflicted on yourself, and now you're not desperate to get the game out the door -- you can finally do things calmly and properly.

The time difference helps you see the project with new eyes. In my case, it's been about two and a half years since the original Rinse and Repeat release in October 2015. Game engine technology has changed, my skills and tastes have changed, and it's surprisingly therapeutic to revisit my past decisions. Like, why did I give everything a weird green tinge? I don't remember. Maybe I had good reasons that I've now forgotten.

Here's some of the specific changes I made to the shower scene, and some of my reasoning: