"Handle with Care" at Queer Arcade, July 27-28 in Toronto

The original Half-Life 2 mod version of Handle with Care will be on-display, alongside much better games with queer themes, at the "Queer Arcade" in Toronto near the end of July. They have a solid-looking lineup, including quite a few creators and designers I've never heard of before, so it should be a pretty cool show. Wish I had time to make it out to Toronto, but maybe some day..

Full blurb is below:

Queer Arcade is a curatorial collaboration between game art curatorial collective Team Vector and the Toronto exhibition space VideoFag, which addresses the theme of queerness in video games.

read more »
at 3:22 PM
Email ThisBlogThis!Share to TwitterShare to FacebookShare to Pinterest

The Fall games conference season is in the works. (Get excited.) Here's my current schedule, subject to change...

In my talks at No Show and QGCon, I'll be talking about game levels and approaches to close-reading them, emphasizing their technical construction as a locus of analysis. The talks will be slightly less political than last year, focusing more on what I think good "meat and potatoes" / "basic analysis" might look like -- criticism that considers games as not just play systems and media objects, but also as technical artifacts engineered within certain constraints. (Of course, code is political too, but... baby steps.)

Uncharted looks and plays the way it does partly because of how its 3D engine works (texture memory constraints for consoles, deferred + forward renderer, no level of detail system), how Naughty Dog organizes its artists (does one artist "own" a level? outsourcing procedures?), and how level designers work (mostly in Maya, no in-house editor?) Yes, it also exists within AAA shooter culture and cribs freely from Indiana Jones pulp adventures, but all video games are also digital artifacts that run on some sort of code. How do technical contexts shape aesthetic contexts, and vice versa? Answering that question is traditionally called "game development," but I think effective game criticism can do much of the same work.

You do not have to be a programmer to understand (on a basic conceptual level) what a game engine is doing and how that has changed over the years.

at 1:12 PM
Email ThisBlogThis!Share to TwitterShare to FacebookShare to Pinterest

"Press F to Intervene": a brief history of the Use Key Genre 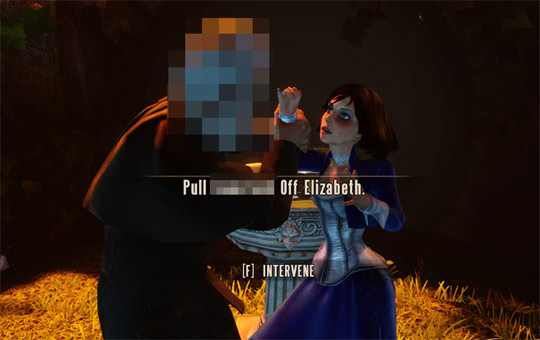 There are NO *detailed* spoilers for BioShock Infinite in this post, so relax. I try to speak in a really general / vague way about what happens in the last third of the game.

Can a game about picking the right hat to decrease your machine gun recoil by 45.2% -- can that game reasonably do the work of talking about what it's actually about, much less talk about what it thinks it's about?

No, of course not.

But if there's one image from BioShock Infinite that I'm going to remember, it's this:

read more »
at 10:53 AM
Email ThisBlogThis!Share to TwitterShare to FacebookShare to Pinterest 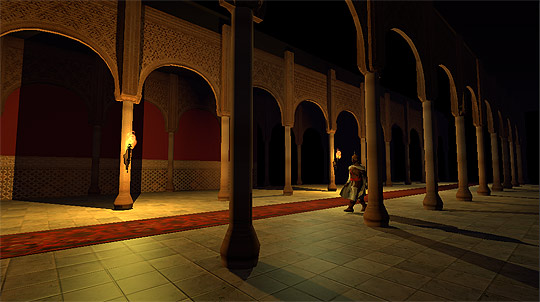 This post relies on familiarity with the gameplay / affordances in Thief. You may want to read Dark Past or my write-up on "Assassins." You're also encouraged to read through Mr. Monahan's Design Reboot blog.

I've been watching Thief 4 coverage over the past months and I'm increasingly convinced that I'm going to hate it. So let's pretend, just for fun, that I'm making a Thief-like... What are the best qualities of Thief to preserve, and which parts of the sacred cow would I lop-off? Here's what I'm thinking:

KEEP: Level size. Thief levels vary from medium to extremely large. "Life of the Party" was a single mission where you had to traverse an entire cityscape of rooftops through two dozen buildings and then also infiltrate a huge skyscraper at the end. Sheer architectural scale is important to maintain a sense of...

KEEP: Infiltration and exfiltration. You have to get in, rob the place, and get out. There's always an outside and an inside, and it's great to feel that you're not supposed to be inside. But previous Thief games usually neglected exfiltration as redundant backtracking or worse -- something totally nonexistent because you've already incapacitated the entire guard garrison by the end of a mission. (My favorite Thief 1 mission, Assassins, is one of the few missions to really do something with exfiltration.)

ADD: Organic use of dynamic lighting. With dynamic lighting and shadows, you can do totally unimaginative setpieces where you have to hide in a guard's shadow or hide in the shadow of moving objects on a conveyor belt. But something else is going on here: with dynamic lighting, open doors and windows become light sources -- and if you can close the door or block the window, you've "extinguished" that light -- but if there's a ramp in front of that window, you can't put anything there to block it because it'll just slide down, etc. That possibility sounds much less horrible than a contrived puzzle that you designed to death.

read more »
at 10:23 AM
Email ThisBlogThis!Share to TwitterShare to FacebookShare to Pinterest

Amnesia, Among the Sleep, and horror economics. 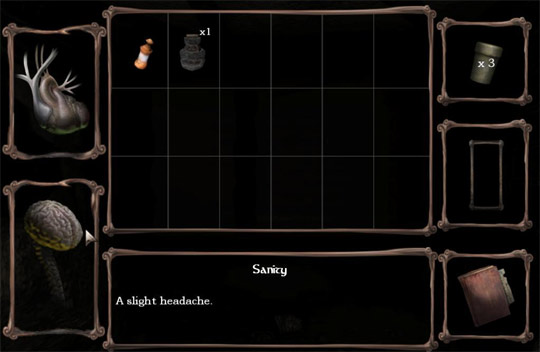 I used to have a low opinion of the many busywork-type interactions that fill survival horror games. To me, it seemed like these games were about managing this totally artificial-feeling, designed-to-death resource scarcity ("I need more red herbs! I need more lantern oil! I need 9mm ammo!") and scavenging your environment for supplies. How can you optimize your ammo usage for the future when you don't know where you'll be or what you'll be up against?

Maybe these horror games work sometimes because, really, they're about the experience of being poor. They're about paralyzing uncertainty and the inability to plan, but still surviving. It's about how math can tire you out.

read more »
at 1:08 PM
Email ThisBlogThis!Share to TwitterShare to FacebookShare to Pinterest

No Show Conference is an intimate game dev / game crit conference at MIT. And they want talk proposals.

Last year, last No Show Conference, I had a pretty good time. I met many MIT games academics, East Coast indies, Canadian indies, and interactive fiction authors. It's kind of a strange crowd but I think it works, and the lack of bullshit really helps everyone talk to each other as people instead of networking opportunities. For this year, No Show's back -- and they've even lowered the price to make it more affordable -- which is pretty much unheard of, among the game conference circuit, and to me it shows that they don't just talk the talk but they actually go and do what they argue for.

Much like last year, they offer a $500 travel / hotel stipend for speakers.

So go and submit a talk! You have until June 7th. It's a conference and community worth supporting.