Identity, camerawork, and time in games; on "Into" by Audrey Moon 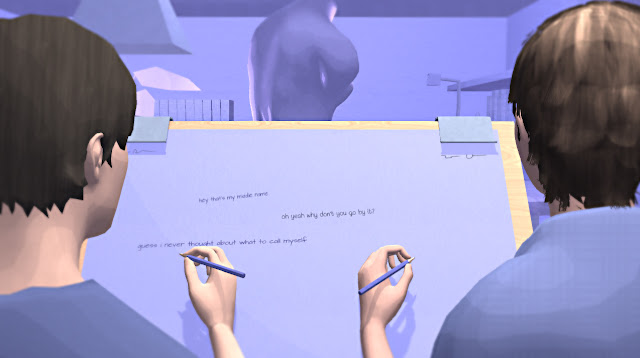 This post spoils Into, which is about 5-10 minutes to play. You should probably play it first, if you care about spoilers and such.

Ingmar Bergman's film Persona (1966) is about two people who kind of merge into each other. Maybe this happens because you share a lot of interests or temperaments, or you're in love, or you're family, or whatever. In Persona, this merging process is often difficult, confusing, awkward, and/or painful. It inevitably takes on sexual overtones, but this sex feels violent.

Into (2016), by Audrey Moon (Animal Phase), pushes the opposite tone. It is a short "interactive" about two people who are kind of joining into one another, but the joining is not particularly unsettling. There's a risk to it, but it also feels right to take that risk. Why does it feel more right than wrong?

read more »
at 12:35 PM
Email ThisBlogThis!Share to TwitterShare to FacebookShare to Pinterest

I'm putting Attract Mode (the gay bar game) on hold to re-think the core social sim system, and Maven (my open world Thief-like) is on hold until Unity 5.4 ships (I tried bringing it into the 5.4 beta and that was disastrous) -- so now I'm trying to get this Steam release for the first three gay sex games out the door instead.

I'll hopefully finish development in a week or two, and then ship this on Steam before GDC. We'll see how all that goes...

read more »
at 12:37 PM
Email ThisBlogThis!Share to TwitterShare to FacebookShare to Pinterest

This is a rant + technical guide about how to get an Oculus Rift DK2 to work with Unity 5 so that you can make stuff with it. Maybe.

I'm teaching two virtual reality classes this semester, and I was dreading having to tell all my students that Oculus (in all their wisdom) has a public policy of no longer supporting Mac OSX, or any laptop, for the foreseeable future. Even now, when I tell my colleagues about this, they react with incredulous shock. With this single move, Oculus basically alienated the entire creative coding / technologist community, and basically 99% of the design / programming community in New York City.

The core of the issue is in how Oculus wants to synchronize (a) the image in the VR HMD (head-mounted display, or headset) with (b) the very subtle motions your head makes. If these two sensations aren't synchronized, then people usually suffer "simulator sickness." So, the VR industry generally wants to make sure these two things are synchronized as closely as possible, to make sure people don't vomit when using this glorious new technological medium.

In order to synchronize those things as fast as possible (90 frames per second is the minimum, 120 fps is the ideal) the HMD needs "direct access" to your graphics card.

Most laptops are engineered purposely to cut-off direct access like that, mostly because they have two different graphics processors -- one weak energy-efficient GPU, and one higher performance power-hungry GPU. For day-to-day non-VR use, the weak one is more than good enough, so that one is in charge.

From a VR developer perspective, we were early adopters and happily making Oculus prototypes for years, and our "weak inadequate laptops" were good enough. Then around runtime 0.5, Oculus discontinued OSX support and began insisting that all laptops were just inherently inferior and didn't deserve any attention. From our perspective, Oculus basically took away something that seemed to be functioning fine, for basically no good reason. It's really really really annoying.

If you search "oculus laptop", it's mostly going to be forum posts from the Oculus community manager telling people that laptops aren't supported... so I was pleasantly surprised when I was prepping to teach these VR classes and it turns out runtime 0.8 actually does work on my Windows laptop! My suspicion is that the GPU vendors Nvidia and AMD both updated their drivers to give Oculus what they wanted... well, kind of.

read more »
at 2:15 PM
Email ThisBlogThis!Share to TwitterShare to FacebookShare to Pinterest

Here are my current games event plans for the upcoming 2016 games event season. It's pretty packed. If you'll be around too, feel free to say hey if you see me.

at 7:00 PM
Email ThisBlogThis!Share to TwitterShare to FacebookShare to Pinterest