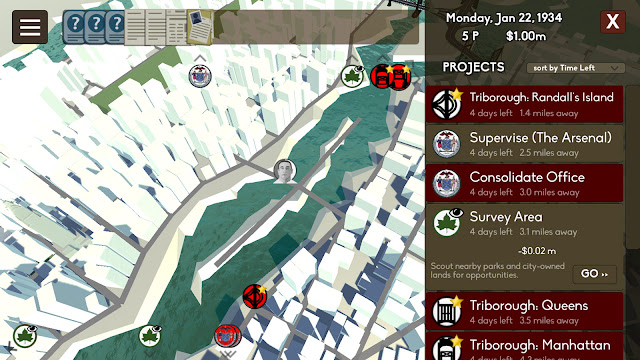 Me and Eddie now have 12 days (less than 2 weeks!) to complete this Robert Moses city game, so we're now transitioning into a late stage production mode: we're cutting systems and content we won't be able to complete, and trying to finalize the stuff we already have. We're cutting the park-building system to focus on the highway-building system, and we're trying to do a lot of mission design.

The finished prototype we're aiming to deliver will be kind of a "vertical slice" of an Act 2 of a larger game, and will represent Robert Moses' career from around 1934-1936 -- from when he is appointed as the first city-wide parks commissioner, to when he completes the West Side Highway and Henry Hudson Bridge. We're putting a lot of work into interpreting the "spirit" of Robert Caro's book The Power Broker as a very specific and detailed-oriented historical work; the in-game city must reflect the New York City of 1934, with historical streets and district names, and the mechanics must also reflect Robert Moses' real-life historical tendencies.

read more »
at 2:53 PM
Email ThisBlogThis!Share to TwitterShare to FacebookShare to Pinterest

Why I am one of the most banned game developers from Twitch, and 3 steps they can take to fix their broken policy

EDIT, 14 July 2016: this original post has been cross-posted (with a few additional excerpts, for context) to Polygon.

A few days ago, Twitch banned my newest release Radiator 2 from all broadcast by anyone throughout their entire site. This is the third release of mine that they've banned. I am now the 3rd most banned game developer from Twitch (or perhaps the 2nd most banned, if you count each part of Radiator 2 separately).

I'm no stranger to Twitch game bans, but this is new even for me: the games bundled in Radiator 2 are actually kinda old! For the past year and a half of press coverage, interviews, game festivals, art exhibitions, and viral videos, these games were OK to broadcast on Twitch. I had thought I found a safe ground of "acceptable sexuality" (an extremely dangerous concept in of itself) but with this move, they've now banned basically everything I've made. Now, nowhere is safe for me as a creator.

What's too gay for them, what's too sexual for them? Why did they change their mind when I re-mastered my games and put them on Steam?

I have no idea, and that's the biggest problem: Twitch never says anything. No e-mail, no notification, no rationale, no reason, no pity tweet. Am I just supposed to keep refreshing the ban list page to see if they banned me, for every single game I make, forever?

This is humiliating and dehumanizing treatment, and I wish Twitch would stop it.

read more »
at 10:57 AM
Email ThisBlogThis!Share to TwitterShare to FacebookShare to Pinterest