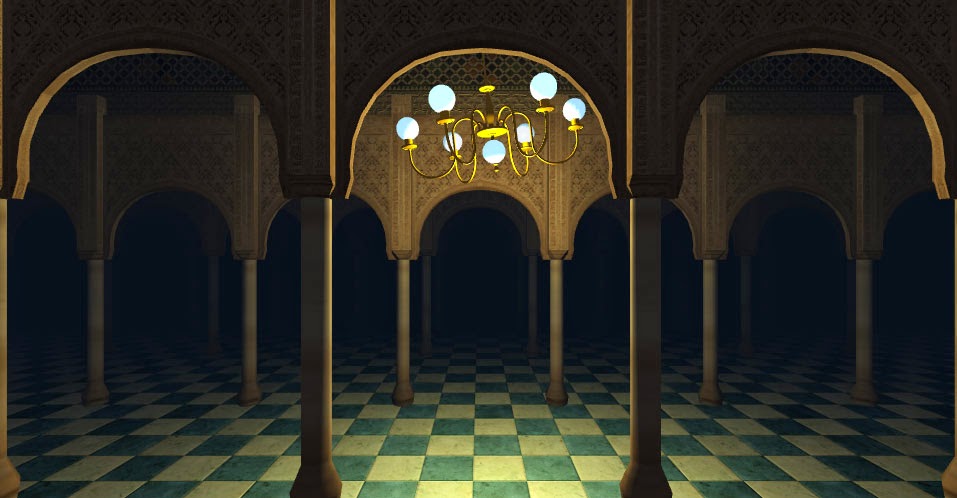 I was eating fried chicken and "Chandelier" came on in the restaurant and it was a pretty catchy tune so when I went home I made a game about it in about 2 hours. Head on over to makega.me to play it / check out the rest of the pageant entries, also based on songs.
at 12:40 AM
Email ThisBlogThis!Share to TwitterShare to FacebookShare to Pinterest 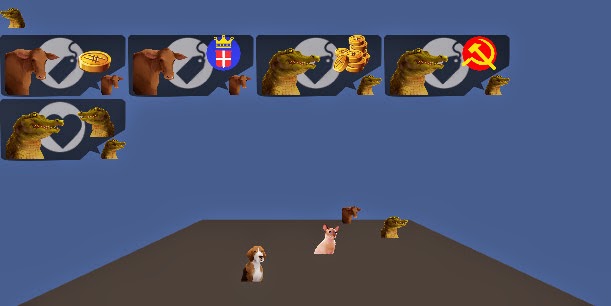 I am currently trying to prototype some sort of social simulation in Nostrum, and I am currently facing three main design problems:

formal definitions (within my system) for emotional responses to information
While showing the game at GaymerX, I had to disconnect the social sim portion because, internally, the NPCs kept getting upset at each other for talking about each other to someone else -- and they would be so upset that they would just go inert. What is the difference between discussing someone else vs. talking behind their back, and does my system have the context to make that distinction? Information currently does not have a "positive" or "negative" valence, it is just information that might be true or false. Should I remove this from the system entirely if I can't make it intelligible? At the very least, I want a system that will collapse in an interesting way.

read more »
at 12:17 PM
Email ThisBlogThis!Share to TwitterShare to FacebookShare to Pinterest

If you see something, say something

I was telling my sister about Cards Against Humanity and the rape allegations against Max Temkin.

I told her I now felt strange about accepting a free flight / hotel from them to attend GaymerX and show my half-baked game in their sponsored room. Before, I had thought of it as part of their attempt to make things right, after they finally removed the totally unacceptable "date rape" and "passable transvestite" cards from the game -- and if they were going to commit substantial time, energy, and resources into this community, then maybe that would allow for some healing? After all, I had only had fantastic interactions with the extremely helpful CAH production staff at the expo. (I am still extremely grateful for everything Trin and her team did for me and the other developers.) However, it's safe to say that their intended redemption narrative has now been somewhat derailed...

My sister said it reminded her of American Apparel ousting Dov Charney, where the institution had to rescue itself from toxic thinking and behavior, and that was the only way to do it. I disagreed with that comparison. Charney was totally unrepentant, while Temkin at least made some attempt to internalize feminism, even though he ended up getting it horribly wrong. Doesn't learning involve making mistakes, even horrific mistakes?

Yes, my sister said, but none of that should shield him from criticism... and she's right. Here's some good criticism.

The more cynical will say he consciously wore feminist language as armor to deny responsibility -- and the vast majority largely want to stay silent, whether because of CAH's clout / influence or because "there's no proof" or "there's enough drama already" and so on... but saying nothing already means you're speaking in favor of how things currently are.

So, uh, I wanted to say something. But I'm not really sure what to say, because it's not clear what reconciliation might look like? Like, okay -- I agree that he screwed up in a really big way. I don't think anyone wants to destroy Temkin. Not even the person he hurt wants that. Now what?

Should he write another post where he apologizes for his non-apology, and is that enough now? Should CAH try to sponsor anymore games events focusing on diversity and inclusivity, or would their involvement now compromise the safe space of that event? What does it mean to create a safe space in games? Can we separate Temkin's words from CAH, and if we can, then what does CAH as an institution think about this? Why was Temkin's statement wrong, and what can we educate people about it? How do the women who work for CAH feel about this? What is the current thinking about how best to practice consent? How do we read all this, next to the ongoing dialogue that happened in and around GaymerX?

Here's my bold idea: some game journalists could do some reporting on this because there might be a story here? And then journalism can serve its vital function to inform a community and promote civic discourse!

at 4:25 PM
Email ThisBlogThis!Share to TwitterShare to FacebookShare to Pinterest

"Keys" by Ryan Trawick, and the emerging shape of post-mod culture and walking simulators

Keys is a newly released single player Source mod, made mostly by Ryan Trawick, that is freely available to anyone with a Steam account.

... Which is made possible by Valve's generous licensing of their Source SDK 2013 Base. This is kind of a big shift in policy for Valve. Historically, mods have been locked to their parent platforms so that they could drive-up sales of triple-A retail (e.g. people buying Arma to play the original Day Z, or Warcraft 3 to play the original DOTA), but something here has changed. Perhaps Valve has decided they have enough money, or perhaps they realized Steam is already a powerful platform to lock-in people anyway. So now, Source 1 is kind of transitioning into more of a middleware platform like Unity or Unreal, though most people outside of the TF2 / CS:GO communities have generally moved on already.

What are Source mods in a "post-mod" age, where they're not even modding a retail game anymore, and they're freely distributed and shared? Can we even still call these things "mods", or have they transcended that type of framing?

Unreal Engine 4. Very good high-end support, integrated vertex-painter, great for making 3D shooty games in huge landscapes. But it's very heavy and assumes you're making a 3D shooty game in a huge landscape, and it feels very bloated if you're not. 7/10.

CryEngine 3. Very good high-end support that assumes you're making a 3D shooty drivey game in a huge landscape surrounded by water. Fantastic foliage and rock placement tools that are useless when that's not what your game's about. 7/10.

Source 1. The 2000-era engine that has aged the best, with its smart bets on image-based rendering and lightmapping. Physics feel tuned so well that Titanfall used the engine pretty much for that. However, has a horribly bad 3D asset pipeline that forces artists to learn an obscure "Quake C" syntax from the early 90s in order to import art -- which, in a 3D engine, is totally inexcusable. 7/10.


at 1:22 PM
Email ThisBlogThis!Share to TwitterShare to FacebookShare to Pinterest