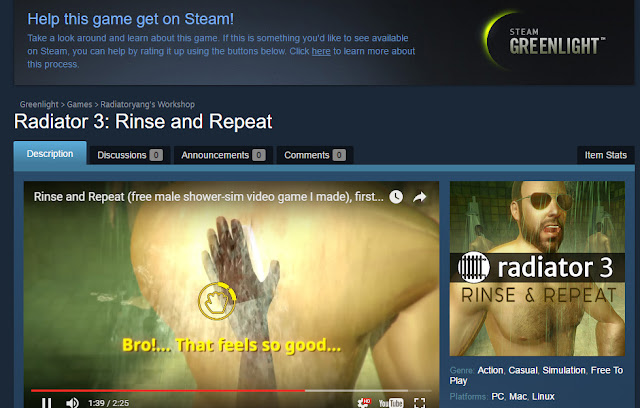 So I've been giving some thought as to what a sequel to Radiator 2 would look like... and I think it'll be a similar format, with a flagship game + other bundled scenes in the same package. It's fairly straightforward to put them all together in one deployment, which is probably one nice advantage to making all my games in the same Unity project folder.

Introducing: the highly anticipated sequel Radiator 3. (Steam Greenlight page is here.) Right now the only segment that's definitely going into it is Rinse and Repeat, I'm still deciding what else I'd want to include with it... What will be new in Radiator 3?
Please vote YES on Radiator 3 for Steam Greenlight, and please forward it to your friends and parents. Together, we can make Steam a steamier place!
at 11:00 AM
Email ThisBlogThis!Share to TwitterShare to FacebookShare to Pinterest

Lighting theory for 3D games, part 5: the rise and fall of the cult of hard shadows

This is part of a series about a critical theoretical approach to understanding video game lighting, while staying grounded in technical realities, and not focusing on a specific game engine.

Last time (part 4), we ended with the idea that video game lighting is a carefully assembled pile of hacks / effects that hopefully seems like a unified phenomenon of light. It might seem annoying to fuss over many details all the time, but this bespoke workflow exists because we need so much control to make sure the lighting calculations doesn't slow our game's framerate.

One of the most "expensive" (computer-intensive) parts of 3D video games is rendering shadows. To calculate a shadow in a video game, we must test-fire many light rays out from the light source. If these rays hit anything (see diagram above) then that means the light casts shadows past that object. To give you an idea of how much we sacrifice to shadows, Crytek said in a 2013 SIGGRAPH talk that they offer ~20% of their frame budget (5-7 FPS out of 30 FPS) to the shadows. (20% of their entire game! just for shadows!)

Since shadows are so expensive to do, it's impressive when we manage to do it anyway. But that also means we want shadows to pull their weight and help sell the game, to justify the work we put into them. We worship shadows while praying for something in return.

The cult of hard shadows began on February 21, 2001, at the Macworld conference in Tokyo:

"Take ecstasy with me": a manifesto for Gay VR 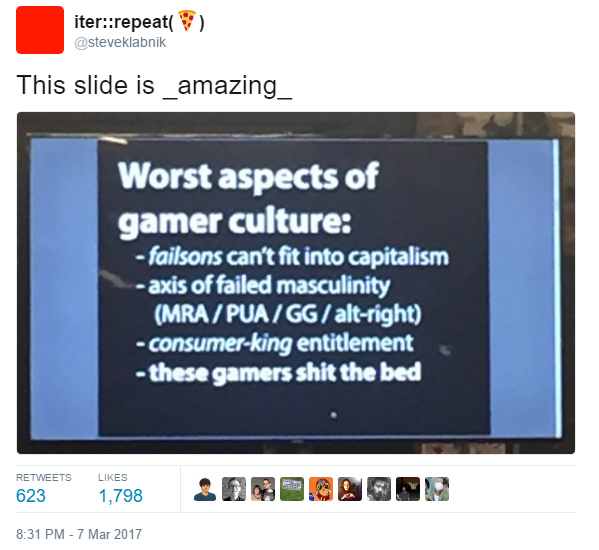 Before I explain what the heck I mean by "Gay VR", let's review why Gay VR would be necessary. I gave a MVR talk on this topic at A/D/O a few weeks ago, and someone tweeted my slide above and it went mildly viral. A quick explanation:
To save a newly emerging VR culture from this poisoned gamer culture, I believe that we must act now, to fortify and insulate pockets of VR culture from the inferno. Ideally, we all pursue many different strategies in tandem, and here's a tactic that I'm working on, it's two short sweet words: Gay. VR.

read more »
at 11:40 AM
Email ThisBlogThis!Share to TwitterShare to FacebookShare to Pinterest

I was playing the open world stealth game Metal Gear Solid 5: The Phantom Pain (2015) and I kept failing Mission 33 ("Subsistence: C2W")... The "Subsistence" label means it's a remix of a past mission, but this time you have to complete the mission without any starting loadout, and rely purely on whatever equipment you find after you begin the mission.

The goal of C2W is to destroy some buildings, but "Subsistence" means you don't begin with any explosives -- and once you start attacking the base, they call-in an enemy helicopter that will kill you very quickly. So your two options are (a) sneaking around and clearing out the base quietly so you can destroy the buildings in peace, or (b) finding some heavy weapons (conveniently, some nearby guards carry rocket launchers) and quickly blowing everything up and escaping before the helicopter kills you.

I kept failing with either strategy, so I decided to look up some tips. The online guide suggested a rather dishonorable trick... (1) destroy the nearby anti-air radar station while in "free roam" mode, outside of the mission; (2) then, finally start the mission, set your own helicopter deploy point right on top of your mission objective; (3) and basically kill everyone with the helicopter's giant overpowered chain gun, easily earning the top S-Rank rating for your performance.

My (wrong) assumption was that changing the world in "free roam" mode would not change the world in "mission" mode. In most cases, this was still true... except in this one instance, the radar station was leaked between alternate realities.

Colin Northway tweeted this about a week ago:

This GDC I strongly felt there's a large movement of young indies that I know nothing about.


As Colin implies, I suspect there is actually no real equivalent of a central "cultural nexus" like TIGSource today. In fact, I've been in on the ground floor of several attempts to make new TIGSource-likes, such as Super Friendship Club and Makega.me, and both of them eventually petered-out in the end for one reason or another. I'm still not sure why, but maybe it's possible that internet forums are a poor fit for what we need these days?

The indie games moment arrived, and has now stabilized into a satellite commercial industry of the game industry. We don't need a central place like TIGSource to imagine it or to advocate for indies to exist. Commercially indie showcase events like Day of the Devs, The MIX, and Indie Megabooth have been been running for a while and will probably keep running.

Today, what would be a public game organization's "mission" now? Everyone has so many different needs and concerns. It's kind of absurd that we even imagined one global "public" that TIGSource was supposed to serve? Local games community problems here in New York City are very different from local problems in, say, Pittsburgh or Capetown or Teheran or Shanghai. One single internet place cannot hope to address all of that.

Many local communities and friend groups have Slacks and chatrooms, but most of these are private and unlisted -- they don't have the "public" face that TIGSource provides / provided. What, are you going to invite Colin Northway to your Slack now? Even if he accepted the invitation, he likely wouldn't stay very long, because Slack requires constant (hourly? minute-by-minute?) engagement and labor to function as a community -- and it'd still be difficult for Colin to understand the tone of your Slack, or what it's really about.

To me, a public games culture should serve two functions: (1) help a local community cohere together, and (2) articulate that community's voice(s) and concerns to the rest of the world.

read more »
at 1:35 PM
Email ThisBlogThis!Share to TwitterShare to FacebookShare to Pinterest

Stephen "increpare" Lavelle's "Universal History of Light" is a highly symbolic "adventure" game released back in February 2014. Reviews at the time hinged on describing it as an "insane dog simulator" game, which doesn't really capture what the game does, so this is me trying to offer a more robust interpretation and understanding.

Universal History of Light begins with a short lecture about the dangers of using laser pointers with dogs. Because a small red laser dot is incorporeal and intangible, a dog can never actually "catch" it -- and they will never understand their inability to catch their "prey", which will supposedly haunt them and cause psychological damage for the rest of their lives.

You then play as the lecturer at the front of the lecture hall, and you point your laser pointer at a student's assistance dog / seeing-eye dog, thus inflicting catastrophic hallucinations upon the dog. The dog now enters the brilliant burst pictured above; what awaits the dog in a new dimension of pure light and knowledge?

Turns out, it is a world of monochrome trauma. In the distance, we see countless planes, searchlights, and anti-aircraft flak illuminate the night sky. As the dog, we are basically wandering the outskirts of London during the Blitz.

read more »
at 12:17 PM
Email ThisBlogThis!Share to TwitterShare to FacebookShare to Pinterest

Next week I'm participating in MVR, an arts-technology presentation series by Pioneer Works and Nancy Nowacek. This particular installment, MVR 2.2, is hosted in conjunction with A/D/O in Greenpoint, Brooklyn, as part of their "Utopia vs Dystopia" series. (Wow so many event series!)

I'll be doing some standard artist talk stuff for an audience largely unfamiliar with my work, but I'll also be trying to speak to the theme a little -- "virtual reality" as a historically utopian project that is quickly descending into dystopia on all fronts. I will connect this to José Esteban Muñoz's idea of queerness as a utopia itself, where we can perhaps use the "horizon" of queer performance to preserve / salvage pockets of utopia in VR.

The other presenters are Jacob Gaboury, Laura Juo-Hsin Chen, and Rachel White, also presenting on their particular practices with art and technology... Jacob Gaboury does cool research with the history of computer graphics and queer computing. Laura Juo-Hsin Chen does playful VR that engages with materiality, like "toilet VR" and physical VR masks. Rachel White explores the fuzzy intersection between internet bots and an internet of cuteness.

It should be a fun night. See you there.


at 12:06 PM
Email ThisBlogThis!Share to TwitterShare to FacebookShare to Pinterest