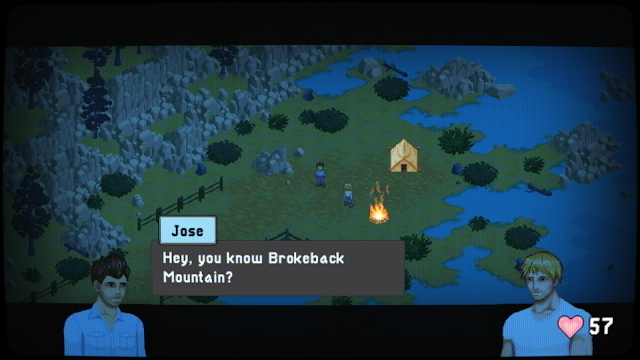 SPOILER WARNING: This post spoils what happens in my new game That Lonesome Valley. If you care about spoilers, play it first. It'll take about 30 minutes.

CONTENT WARNING: This post contains discussion of gay sex acts and some screenshots with obscured pixel art nudity. It's mostly "safe for work" even if the actual game is not.

That Lonesome Valley is a short gay cowboy romance game about walking, sheepherding, and kissing.

Back in 2019 I made an unfinished prototype for a Gay Western game jam to contemplate the anniversary of influential gay cowboy film Brokeback Mountain (2005). Three years later, I've finally finished it. This final release now has gay sex, smoochin', and other important new features.

I'm still not quite happy with how it turned out, but at this point I guess I'm just gonna have to live with it. As usual, I've written about what happens in the game, and I detail some of my creative process, intent, inspirations, and what I hope to contribute to gay cowboy discourse...

read more »
at 4:22 PM
Email ThisBlogThis!Share to TwitterShare to FacebookShare to Pinterest