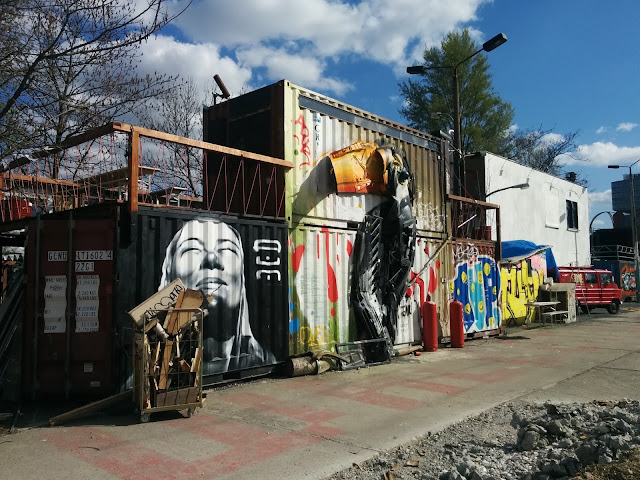 I was told to look out for things that are stereotypically representative of Berlin -- a poster for a "party against racism", a nearby music venue called "Suicide", a group of children walking a large dog on a rope. Berlin seems a bit like the nostalgic ideal of San Francisco or New York City that 30-40-somethings routinely mourn to any nearby insolent millenials -- because Berlin is relatively cheap, young, and raw. It's basically the place for young creative people to be right now.

A MAZE 2016 began with festival director Thorsten Storno decrying the business-ification of indie games and dominance of commercial attitudes in festivals, and arguing for the necessity of non-commercial spaces in games. Then, literally, flamethrowers began shooting up pillars of fire behind him. 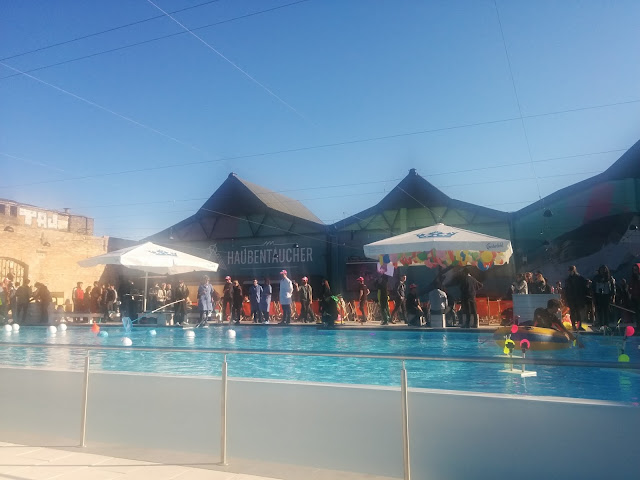 This is a very different tone from most US games festivals, which often try to accommodate monetization-types and commercial indies alongside non-commercial artists and students. There is no such pretense here. Here, there are no posh "meet with Sony" events, no chicken caesar wraps sponsored by Microsoft, not even any bored attendees clutching their Nintendo DS -- instead, that kind of stuff is at "Quo Vadis", a nearby industry-oriented conference that's named after the final dungeon in a Final Fantasy game.

So there's a funny "purity" to A MAZE. It knows what it wants to be, and it has the space and resources to actually be that thing. And apparently that thing is a bunch of artists and game makers huddled around a garbage can fire, clutching tepid 3 dollar beers as the distinct smell of ambient-disco-trance wafts through the air at 3 AM... 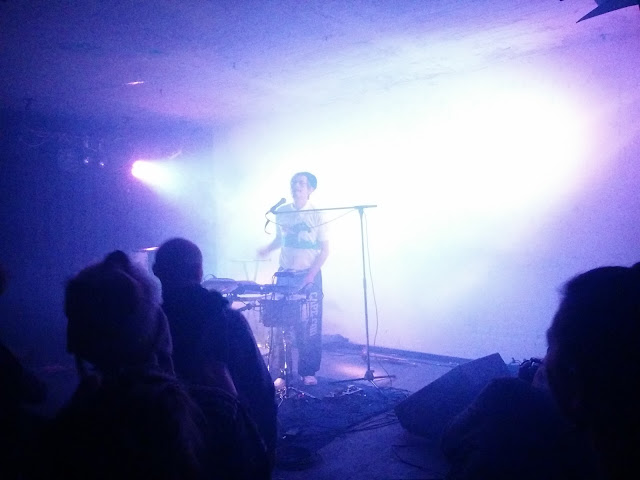 I think I kinda miss it already.
at 8:25 PM
Email ThisBlogThis!Share to TwitterShare to FacebookShare to Pinterest 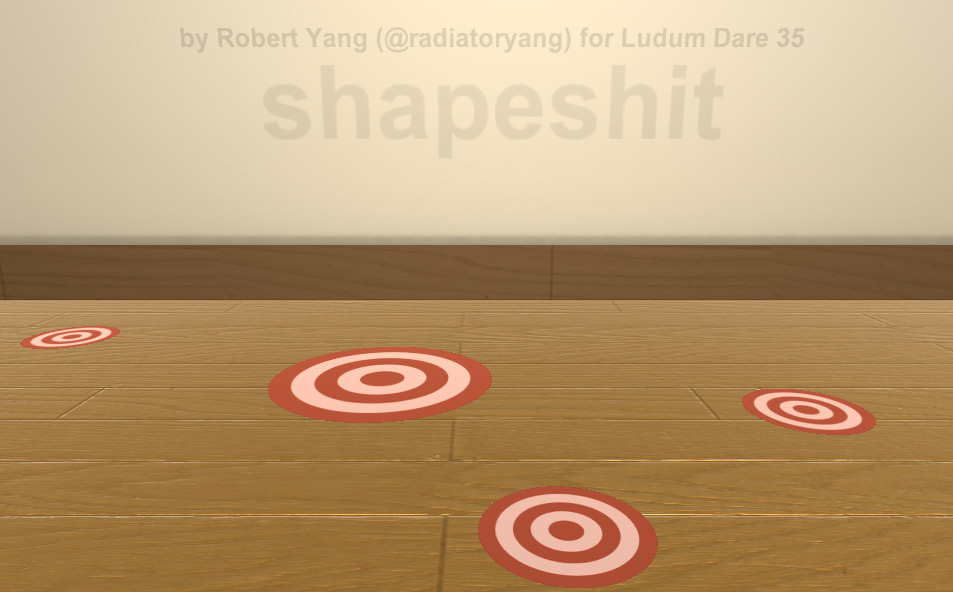 It's April and I still haven't finished and released anything all year, so I thought I'd push something out pretty fast -- it's a quick little game for the 48 hour game jam "Ludum Dare" -- called "Shapes Hit!" (content warning: there is poop in this game.)

I think it's a pretty short straightforward arcade game: just hold down the left mouse button, move your mouse to aim, and try to hit all four targets. You can play an in-browser WebGL version on the Ludum Dare entry page, or over on the itch.io page... and that's pretty much all there is to it.

This isn't a very deep or intellectually complex game. Some of my friends tell me I'm the Robert Mapplethorpe of games, but sometimes I think I'd rather aspire to be the John Waters of games?

Things I still have to do: add some audio and sound, and maybe push out some Windows / OSX / Linux desktop standalone builds. I'll probably wait until after the jam for that.
at 8:24 PM
Email ThisBlogThis!Share to TwitterShare to FacebookShare to Pinterest

My blog posts lately have been mostly talk announcements or transcripts... sorry. I think that's probably the downside of getting noticed and getting invited to do talks -- I end up having less time to write posts (I don't know how Emily Short manages to do it!) but I also end up "saving my ideas" for talks instead of posting about them.

That said, here's another talk announcement -- I'll be speaking at A MAZE 2016 in Berlin, Germany, on April 21st. I'm kind of anxious about it because the last time I gave a talk in Germany was GDC Europe 2012, and I fundamentally mis-read who my audience was going to be, and the talk didn't go very well. I'll try hard not to fuck it up this time, especially since I'm basically the first talk of the whole conference! Ahhhhh!

Here's the talk description from the A MAZE program:


If you always win a game as fast as possible, then you are probably very good at games... but if you always have sex as fast as possible, then you are probably bad at sex. (Why did no one ever tell you???) So what does it mean to be good at a sex game, and anyway, what is a good sex game? In this talk, I will talk about all the gay sex games I've been making, as well as many other sex games I've been enjoying, even some of the straight sex games. But it's also OK if you never play any of these games -- because it's even hotter when you watch.

Basically, I want to (usefully) conflate notions of skill / quality / value / "goodness" with regard to sex and sex games, and I'm going to try to connect the past 3-4 "big ideas" I've written about... Ideas about how sex functions in games, about games and intimacy, and about how playing a game is now ancillary to witnessing a game.

Again, hopefully I don't fuck it up.

If you'll be around, feel free to say hello, I'll be around for most of the festival.
at 12:40 PM
Email ThisBlogThis!Share to TwitterShare to FacebookShare to Pinterest