ARCHITECTURE
These are books that I find useful for learning about architecture as design and theory. I've never formally studied architecture; my reading usually has to pass a "can I apply this to video games?" test that is intellectually cynical but like whatever. Fortunately, few things in architecture fail that test.

Grammar of Architecture (Emily Cole)
Every single environment artist should have a copy of this book; it's basically a 300+ page cheat sheet that talks about common decor patterns / floorplan structures of most pre-Neoclassical architectural styles around the world. Cole generally does a good job of balancing discussion of ancient Indian temple ornament with the The Alhambra's mathematical dimensions, trying to explain the history and ideas behind individual elements. It's effective because it doesn't try to be deep and is content to be a general survey, relying heavily on (numerous, small) drawings and pictures. It gives you a fast surface understanding of a style (e.g. a few pages for Gothic, and that's it) -- enough to build it and move on. These are, essentially, 150+ pre-assembled moodboards.

read more »
at 12:21 PM
Email ThisBlogThis!Share to TwitterShare to FacebookShare to Pinterest 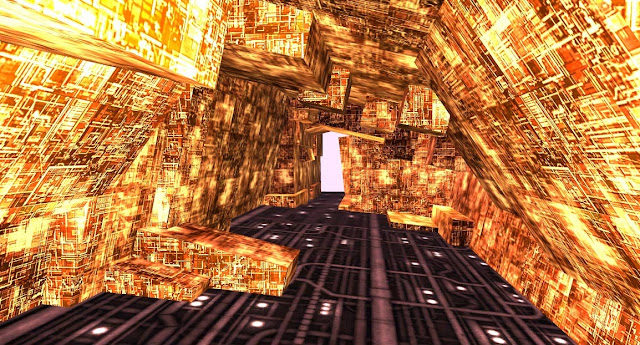 I'm not sure if it's in the spirit of the thing to actually explain or say anything about the thing, so I'll say very little about it, I suppose:

Terry Cavanagh thought it was cool how the RPG Maker community did chain games, so why shouldn't we? We agreed. And so: Experiment 12. My chapter was kind of disappointing -- I went out of my comfort zone and came back with mixed results, especially after following the great work Michael Brough did on his chapter -- but I guess it's okay, you can't win 'em all... And overall, I think everyone did good work, and the diversity makes it all feel really human and raw.

at 9:46 PM
Email ThisBlogThis!Share to TwitterShare to FacebookShare to Pinterest

Several independent parties have asked me for book recommendations and stuff, so now I'm starting a series of posts about books to read, and some notes on how to possibly approach them.

THE GAME DESIGN BIBLES
These are core books that establish terminology and basic theory about games and development. If you've played games for a long time, much of this material will seem obvious / simple / not worth saying... but that's only because games are in your blood. A lot of it isn't obvious to everyone. So, it's important to maintain a "greedy" attitude in reading -- pick and choose what you like from these texts, and don't feel obligated to like (or read) the entire book.

Rules of Play (Katie Salen, Eric Zimmerman)
I'm pretty sure Rules of Play is taught in, like, every university-level game design class in the world. It's extremely comprehensive in approaching game design as science and culture -- it's pretty much a primer on everything. The problem I'm seeing, though, is in the people who've rarely played games but want to make games as a career: they read this book and think this theory IS games, rather than a tool that sometimes helps you think about games. (see: "the map is not the territory") These "textbook developers" have a strange way of doing things, often wondering aloud how best to satisfy The Five Different Types of Players or how to Teach the Core Mechanic, instead of, uh, talking like a human being. I think game design is really lucky in that the veterans / masters of this field will usually preach against simple fundamentalism like that... well, usually.

read more »
at 5:01 PM
Email ThisBlogThis!Share to TwitterShare to FacebookShare to Pinterest

In the last few weeks, Valve has dropped the GCF file format. A "GCF" was like a ZIP file containing thousands of game files. They were usually quite large (several GB was common) and so they were prone to file fragmentation, which balloons loading times as games need to load more files and assets. With Left 4 Dead, Valve started shifting their filesystem infrastructure to a "VPK" format -- instead of being stuffed into one or two colossal files, game assets are distributed among many more smaller .VPK files, improving loading times. Valve has now converted all their older games to use the new VPK file format too.

It's great, but it has also broken most Source mods made before 2013. Fortunately, the fix is pretty trivial: it involves editing the "gameinfo.txt" to mount the file assets in a different way / order than before.

If you want to play Radiator (or any single player mod based on Episode Two), just follow these instructions:

A Half-Life book: some pillars.

(CAVEAT: Manifestos, by their nature, must be militant. I use environmental storytelling theory all the time in my games; however, that won't stop me from pleading for its death as the pre-eminent narrative methodology in action games. There are countless other ways to tell stories and mean things, we must simply discover, articulate, and disclose these new ways to each other.)

I guess I'm writing some sort of book, about Half-Life 1, for Brendan Keogh / Dan Golding's new recently sort-of launched book publishing project. So what's there to say about Half-Life?

I know I definitely don't want to focus on Half-Life's authored narrative (dialogue, scripted sequences) or "environmental storytelling" -- I think that approach is played-out, and the promise of that approach has proven to be a failure -- it's convinced so many game developers that a ragdolled corpse with some blood and bullet decals is supposedly a "good story" instead of a weak, generic vignette that's not really about anything. Two ragdolled corpses next to each other isn't a good story. A chair with a shotgun next to it isn't a good story. There are very real limits to this methodology if that's the most "subtle" we've been.

read more »
at 12:31 PM
Email ThisBlogThis!Share to TwitterShare to FacebookShare to Pinterest

I made a video game trailer

I've had this song sitting in a folder (called "trailer music") for about 3 years.

at 11:03 AM
Email ThisBlogThis!Share to TwitterShare to FacebookShare to Pinterest

How a "Last of Us" art dump thread teaches "vision." 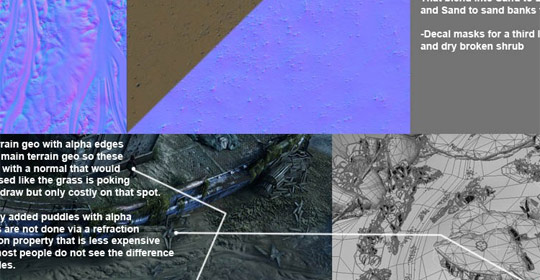 At Polycount, Rogelio Olguin posted an art dump of some environments from The Last of Us, as well as some notes on his environment construction process. All of his posts are worth reading, but I'm going to copy the part that really stuck out to me:


"One thing I hold true is that one texture will not make things look awesome. Imo well balanced shaders will. I think we are starting to move away from this one texture looks sick. Like the below textures are kind of boring alone but together it looks sweet. I really do not think anything we did in ND is "special" it just well balanced from good forms and composition (Modeling) to materials treatments (texturing)"

This shift in AAA art workflows, from focusing on individual art assets to thinking more holistically about how shaders, lighting, and art direction work together -- I think most AAA-affiliated 3D game artists agree with that in concept, but a cursory look around the Polycount forums shows that many of them still focus on honing one perfect asset for one screenshot.

Part of the problem is a games industry that demands certain types of presentation, style, and specialization in portfolios. ("To work here, you must have one normal-mapped sci-fi crate prop, with perfect topology and no wasted UV space.") But I think most of this problem stems from a lack of vision.

read more »
at 2:04 PM
Email ThisBlogThis!Share to TwitterShare to FacebookShare to Pinterest