This post spoils the gameplay and ending of my game Dream Hard.

In collaboration with local arcade collective Death by Audio Arcade, me and several other gay / queer artists made games for a Brooklyn queer arts space called The Dreamhouse. My contribution was a retro low polygon 3D brawler called Dream Hard. If you ever find yourself around the Bushwick or Ridgewood neighborhoods in New York City, you can play this (and many other queer games) on The DreamboxXx cabinet at The Dreamhouse.

While making this game, I was interested in what it means to appropriate a game genre with queer intent, and I wanted to figure out why the brawler genre would be a good fit for this kind of aesthetic. Some of my early prototyping and design direction is already covered in an earlier post. I wanted something that recognizably belonged to the arcade era, while staying fairly simple and accessible to a general audience.

Much of my personal memory of arcades focuses on big licensed beat 'em up games like the X-Men brawler cabinet or The Simpsons arcade tie-in. I also liked playing old 16-bit console games like Golden Axe II or Streets of Rage 2 on the Sega Genesis, but neither of those franchises exists today. Other than a few notable indie releases, the classic brawler game is mostly dead. I wanted to channel my nostalgia for these games toward The Dreamhouse. 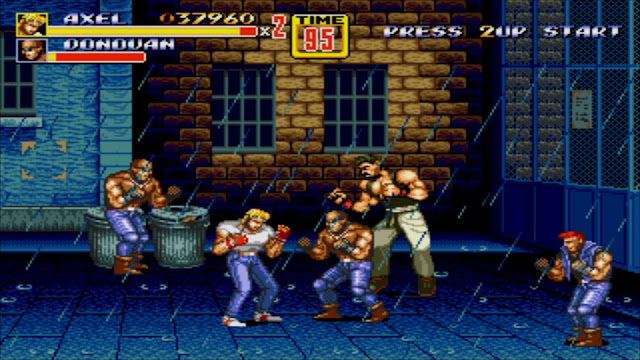 First, let's consider the brawler genre and all its accompanying baggage.

The politics of brawlers like Streets of Rage (1991) come from a history of redlining and "inner cities", infrastructural failure for poor people of color, and the associated anxieties of films like The Warriors (1979) or Escape From New York (1981) where the city is a "no-go zone" supposedly swarming with criminals. In turn, those movies were heavily inspired by 1960-1970s NYC, especially events like the 1977 Blackout, when neighborhoods like Bushwick were some of the most devastated, dangerous, and poorest areas in the entire city. (Also see Shawn Alexander's brawler-tactics game Treachery in Beatdown City for a related take on beat 'em up politics.)

But I feel like Streets of Rage, The Warriors, or Escape From New York's miraculous dream of journey and escape from the crime-ridden city isn't completely relevant to the gentrifying reality of Bushwick / Ridgewood today. This is the neighborhood where The Dreamhouse lives, and hopes to remain. In particular, The Dreamhouse began as The Spectrum, a queer performance space that was gentrified and expelled from Williamsburg. Today, the story is less about escape, and more about fighting to stay! 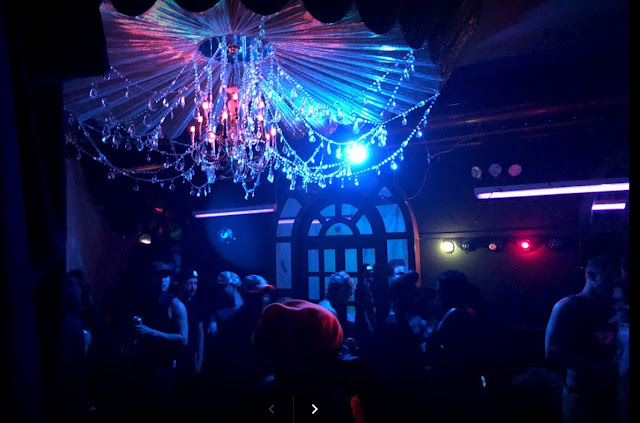 Coincidentally, Streets of Rage games often have anti-capitalist populist narratives which argue that underserved urban neighborhoods are the intentional products of corrupt governments and the greedy corporate elite.

The original Streets of Rage 1 famously begins by warning you not to trust cops. (The actual backstory is a bit more complicated: your characters are ex-cops who seek to reform the police force.) As you fight your way through city streets and industrial zones, you must defeat all the corrupt cops and street gangs united by a corporate crime boss named Mr. X. Throughout the entire Streets of Rage series, each installment has featured a prominent climactic showdown with Mr. X, who usually wears a suit and waits for you at the top of a skyscraper.

The fan favorite Streets of Rage 2 also features a stage progression which is clearly about how automation will affect the working class. This isn't an accident, this is an intentionally constructed Japanese game industry retelling of US politics to a US audience.

Sure, these games feature flamboyant neon-wearing street punks oozing with power and sexuality, and you must fight them, but the bored suit-wearing chairman is always pulling the strings at the top. Even though you're basically brawling with Grimes clones, the ultimate enemy in Streets of Rage is always an Elon Musk figure who totes a variety of guns and unfair high-tech weaponry.

(At the same time, we mustn't induct these works into a mythical perfect social justice canon. Streets of Rage's treatment of its black and brown characters is kind of weird sometimes, while the original Japanese version of Streets of Rage 3 had a leather queen midboss named Ash who was obviously meant as a homophobic insult, etc.)

What would it take to imagine something more genuinely queer, intended as such from the very beginning, instead of relying on wishful projections of queerness onto some mostly normative media? And how do I reconcile this with The Dreamhouse's history / context in Brooklyn?

That's why Dream Hard only takes place in one screen, in one room. There are no scrolling backdrops or additional rooms or flashing "GO" arrow. Most brawlers cast you as a trespasser forced to move through enemy territory, but here I invert that relationship to emphasize how your enemies are the invaders. This place is your place, you belong here.

My combat mechanics mostly resemble Streets of Rage 2. Each character has a basic attack to be chained into a combo, and a special attack that costs some health but is very effective against a crowd of enemies / escaping a mob. As much as I love games like Streets of Rage or Die Hard Arcade, I avoided implementing any of the typical brawler throws or dash moves because (a) I didn't have time and (b) I also wanted to keep the game fairly simple and casual for the club-going audience at The Dreamhouse.

I also implemented two different character classes. A "karate" class runs fast with long combos but with a small attack radius and little endurance, while a "brute" class attacks with a short combo of big heavy swings and moves very slowly with twice as much health. There's also a simple revival system that lets players rescue each other, to encourage cooperation.

To try to compensate for the overwhelming normativity of these gameplay systems, I decided to spice it up with something from the gayest of all video game genres: the JRPG. The Dreamhouse cabinet designed by DBAA has an extra big button shared by both players in the middle of the panel, so I thought this button would be good for some kind of ultimate ability. In the JRPG, that ability is the "summon", which usually brings a miraculous supernatural being into the game to fight on behalf of the players.

In Dream Hard, the summon character is always a hovering glowing golden goddess (pictured in the center, below) who descends from the sky, heals and revives both players, and then proceeds to mercilessly beat up enemies until her time runs out. This pattern is similar to Final Fantasy 12's implementation of the JRPG summon, which spawns a super-powered AI-controlled ally for a limited amount of time. I think this mechanic fulfills a core pleasure of many action games, the act of watching the AI fight another AI on your behalf. When you fight for others, then others will also fight for you.

The dance ending sequence (pictured above) was the very last thing I implemented. I wanted to invoke themes of survival, fatigue, dreams, and celebration with a short epilogue sequence at the end of the game. Unlike most action games, in Dream Hard every defeated enemy's body remains on the floor and does not disappear. By the end of the game, there are 50+ crumbled bodies everywhere, obscuring most of the dance floor, rendering it damaged and unrecognizable. Defending a space, even when necessary, does inflict a cost on a space.

But as the floor gradually fills with dancers, you clean-up the floor and celebrate who was displaced. It's a bit of a cheesy feel-good pep talk, but that kind of radical upfront communal hope feels necessary and queer to me in 2018. This tone is the also the crux of the DIY punk aesthetics like The Dreamhouse, necessary to cope with limited resources and spaces by showing up for each other. If society thinks queer people are trash, then we'll work together to make trash fashionable and exciting.

To cement this campy "let's revel in our own trash" approach, I choreographed the ending dance scene to build-up to a meme track by Renim: it's a ridiculous mashup of that Shooting Star meme synthwave track with a pitched-up version of "I'll Make A Man Out Of You" from the Disney film Mulan... and true to the tradition of mashups, it works way better than you'd think.

When paired with a jubilant queer disco dance floor scene, I argue that this track (especially the second half) is transformed from a winking meme mashup, and into a classic 1970s gay dance anthem mocking the public performance of masculinity. It does this while evoking a 2016 viral video meme that simultaneously nostalgizes the closing of the Spectrum and reopening of The Dreamhouse in October 2016.

Of course, no one could hear any of the sound at the premiere party anyway. The May 26 debut of the DreamboxXx arcade cabinet coincided with their notorious monthly "Ova The Rainbow" late night rager, and the room was full of wall-thumping dance music and fashionable neon-strobed bodies writhing around the floor.

It was probably the loudest, gayest, sweatiest, and most intense video game release dance party ever, perhaps in the history of the world? I was impressed. Local blog The Gothamist even covered the event, with lots of great photos of sweaty fashionable beautiful gay people playing video games.

If you're a local NYC community organization who wants to host their own arcade night / wants their own arcade cabinet with unique games, you should maybe get in touch with the folks at Death By Audio Arcade. I also want to acknowledge all the other folks who made games for the cabinet:

Haitham Ennasr made "Local Informant", Eddie Cameron made "Queer Space"... (and I'll add more to this list as they finish their pages!)

You can play Dream Hard, along with many other great gay and queer themed games by local artists, on the DreamboxXx at The Dreamhouse, 1022 Wyckoff Ave near the Halsey L stop. A complete playthrough (finishing all 8 waves) takes about 10 minutes. And for more technical details on the development process, see my previous post with my early prototypes and shader notes.

Lastly, can also download your own copy of Dream Hard and play it on your own computer.