Adam "Cargo Cult" Foster. The man behind MINERVA: Metastasis. If modders were celebrities, he'd be the most famous. Men want to be him and women... uh, and men want to be him! His work is smart, literary, and quite playable. He was courted by Valve to go work for them. He has intelligent things to say about everything.

First, the man made some Doom 2 WADs or something. I think? Whatever. It's not important. (Just kidding; everything he does is important. I just don't know anything about them.)

Then in the years 19XX-2001, he started working on Parallax for Half-Life 1, of which we have 2 beta maps floating around the internet somewhere. Even though it's only 2 BSPs, you can already see Adam's emerging style: giant sprawling maps with sizable outdoor areas, interconnected, neatly constructed...

(I can't find any decent screenshots from Parallax, and I don't want to bother re-downloading Half-Life 1 to load the BSPs up, so enjoy the lovely decorative picture above.)

I've always admired his keen understanding of how to structure arenas against squad based enemies; not so much forced paths as large areas with wide floorplans, allowing the AI some opportunities to flank you if you weren't careful. (The man knew how to use his houndeye, if you dig my mean.) While this type of "open plan"-esque level design is pretty ubiquitous these days, forming the basis for Halo and Gears of War, it was still somewhat uncommon back then because of technical limitations that favored a linear room-hallway-room model of level design.

In particular, one pretty cool set-piece in Parallax - involving a giant, excruciatingly slow cargo lift built into the side of a cliff - would return in his later work for Nightwatch. (Another trend in his work: re-using ideas, re-using areas.) I think the theory is that repeated visits to interconnected areas creates a sense of "place," a structure that pervades Adam's levels. You will backtrack -- but curiously, you won't mind. And nothing captured that better than "Someplace Else"... 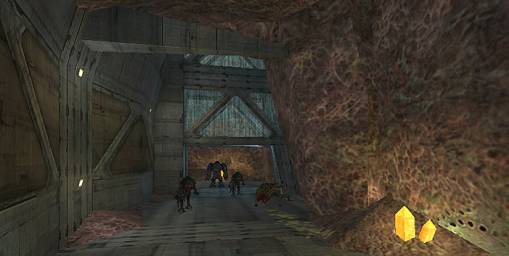 In 2002, Adam built the genre-busting "Someplace Else" as part of the "Project Quantum Leap" compilation of maps built by some regulars at Valve-ERC (Editing Resource Center, the early ancestor of the current Valve Developer wiki -- a bit of trivia: the site logo was a hammer, after the hammer in the Worldcraft logo, which is why the current Source level editor is now simply called "Hammer.")

Someplace Else was a "Xen map" without any wretched jumping puzzles -- and thus, one of the few successful Xen maps ever created. The Shaderlab "Majestic" sci-fi tech textures, though whored throughout the Quake 3 community, were pretty novel in a Half-Life map and meshed beautifully with the customized Xen textures. Adam also hacked in an awesome "ambient environmental light" setting into ZHLT (i.e. level baking tools) that I really loved. Oh, and the level also had some semblance of a well-written story, something lacking in pretty much every mod at the time. Just sayin'.

Someplace Else also highlights another trend in Adam's work: compression. He wants to fit as much into a BSP as he can. He's one of the few designers who hit numerous memory limits with the current Source BSP file format because his maps were simply so massive (among other things) and Someplace Else was an absolute beast in Half-Life 1. Odds are, he probably wanted it even bigger, but adding another room would've crashed the level compiler.

After that, Adam worked a bit on "I2" (Incident 2) -- an Opposing Force mod, if I remember correctly. (For some reason I recall a Voltigore in some vague well-built hangar in an unreleased one-room demo I had played - or did I dream it? And if so, isn't it sad that I dream about playing HL1 mods?). Anyway, that's all I remember about that. 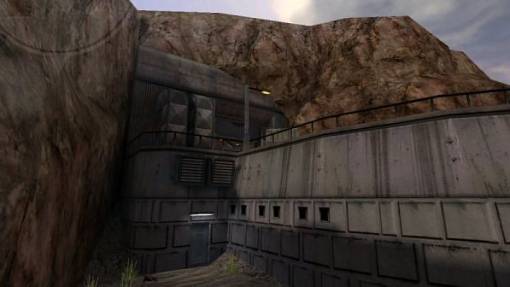 Then came Half-Life: Nightwatch. Originally a small map pack by Andrew Weldon, it ballooned into a 50 level mod with new monsters and weapons, with 40 staff members spanning 5 departments.... and as characteristic of huge mods staffed by college students strewn throughout the world, despite some very talented leadership, we never really released anything. Well, other than some nifty textures here that'd look great in a Unity-powered FPS, perhaps. (Cough. Cough.)

I'd say Adam's contribution to the mod was easily the most substantial out of all of us: hundreds of textures; a grand setpiece involving a crumbling dam / vague sewage processing plant; a vast research complex with different environmental biomes... Everything looped back on itself, everything connected. His levels made so much sense it was almost absurd. Shit, it was practically an entire mod in itself. What a waste. 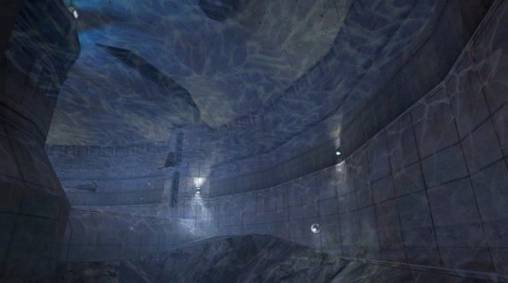 ... And I can't speak for Adam's motivations with his own episodic mods, but the failure of Nightwatch was probably my biggest influence in starting the experiments with Radiator.

I met great people there. We played a lot of Natural Selection together. We had the talent and the resources -- and even then, we were still maybe 50-60% done by the time we (perhaps unwisely) stopped production on the Half-Life 1 version. (It also represented a personal failure on my part, because my contribution was easily the least substantial -- a few half-baked maps set in the dusty underground belly of Black Mesa that strove for the complexity of Adam's work, but didn't end up making much sense.)

So if the monolithic blockbuster model of modding doesn't work (or if it does, it isn't really worth it) then what's the alternative? The first episodic mod that really worked -- MINERVA: Metastasis. (Disclosure: I helped beta-test it.) 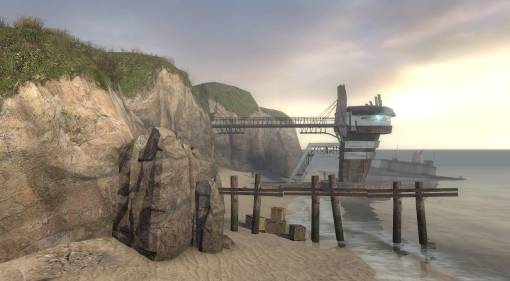 While the whole mod is pretty awesome as a whole, I'm pretty sure I'm not alone when I say that the first level (the island) is the best part. So allow me to gush about the Island (beware, SPOILERS!):

It's a love letter to Halo; from the lovely rock arch, to the way the firefight at the pier is structured, to the Cortana-esque transmissions from Minerva -- it's a love letter to that landmark level, the Silent Cartographer, lovingly realized. And it's remarkably subtle in some ways; when you start the level, the gunfire on your left naturally makes you run to the right. From there, you travel counter-clockwise in a loop around the island.

Everything "fits." The pier at the start serves so many functions: (a) it shows that humans inhabited the island and established a substantial infrastructure, (b) it prevents you from going south instead of north at the start -- the pier blocks your way, so you probably won't even try going around it, (c) it's a useful battleground for later in the level, in case running around the buildings is too hectic for you. And this is just in the first 10 seconds of the level.

The giant beam in the middle acts as a mini-Citadel, a colossal omni-present landmark to ground your presence in the world. The slope of the sand and the facing of the beached ships all point towards the middle, and each locked gate reminds you of your objective -- to get to the bloody middle. Lesser designers would have surrounded the middle with a cliff and a single gate, but when you finally unlock all the gates and roam the island through the previously visited locations, the effect is astounding -- the island seems like a fully realized place, structured non-linearly yet paced linearly. 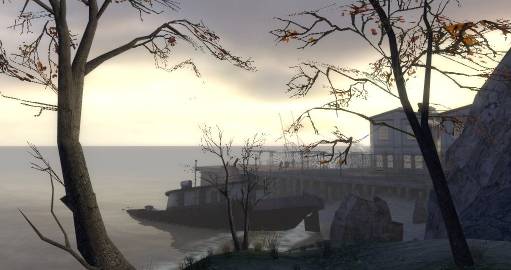 Good design limits your options until you're ready to access them; good design peels back in layers; and the island in the first chapter ("Carcinogenesis"?) does this beautifully.

Upon its release, players often cited Adam's amazing enhancements to the Combine soldier AI... well, the only thing is, there's no new code in Metastasis, so he didn't make any enhancements. Instead, he took a page from Bungie's research on enemy encounters in Halo (2002), which explains that basically more hit points = longer survival = more time for AI to do cool stuff = more time for player to do cool stuff.

So basically, Adam just increased the health and damage of Combine soldiers. He made it more difficult. By designing complete "areas" instead of the room-hallway-room paradigm that haunts even Valve's levels, Adam also allows the Combine opportunities to retreat and flank.

(Many gamers misunderstand the role of AI in mainstream single player FPS games; that is, the enemies aren't there to win. Rather, enemies are there to put up a reasonable fight and challenge, ideally just barely within the player's abilities, and then promptly die. The player ultimately triumphs. Thus, a fully modeled AI, as they found out in Bungie's presentation, is totally undesirable and unnecessary. The goal in these types of games is an illusion of intelligence, not an actual autonomous agent with robust capabilities.)

(A brief AI-related mod development anecdote of my own: I'm experimenting with stealth gameplay against the Combine soldiers -- once alerted, the player can hide in shadows to evade them. Well, I go ahead and evade them, hiding behind a fence... and the Combine squad actually stationed 2 soldiers at one end of the fence, while sending the other 2 around the fence to flush me out. I didn't know the Combine AI was capable of doing that -- I thought it was just programmed to run towards me and die, for the most part.)

After finishing Metastasis and winning the enduring adoration of fans everywhere, Adam began work on the sequel "Out of Time," a lovely quasi-free-roaming adventure set in City 44, a snowy city inspired by his photo safaris around Warsaw and Gdansk.

... And then (unfortunately?) Valve plucked him to go work on Half-Life 2: Episode Three. And seeing as we still have no word of Ep3 at this time of writing, we're probably never going to see OoT. Oh well, them's the breaks. However, the mind boggles at what kind of easter egg he'll hide in Episode 3:

It's going to involve decompiling the prime numbered BSPs, then taking the 4th letter of the target name of each npc_pigeon entity to form an 8-bit DTMF cypher that can only be processed on a Commodore 64 running a flawed build of Linux from December 1999 which exploits an obscure bug involving memory addresses -- the result will be a four word phrase in Gaelic, the title of a book at a library in Bangladesh with every third number circled -- and when you put all those numbers together? GPS coordinates, or perhaps an ISBN number.

And when you add up all the digits, it'll equal 42.

Perhaps that's the most defining trait of Adam's work: how he designs everything meticulously, how he thinks through everything so completely -- in other words, he's crazy.

at 10:30 AM
Email ThisBlogThis!Share to TwitterShare to FacebookShare to Pinterest