REMINDER: You need 2 players for this game. One player clicks "Bailiff" to host the game, then the other player on the LAN clicks "Debes" to join the game.

Me and Eddie Cameron made another Unity game. There's gameplay in it. It's actually surprisingly fun, despite my best efforts to sabotage it.

The setup, kinda like Spy Party: there's an island with lots of NPCs. As Lucas Debes (17th century Danish priest) who's trying to escape the Faroe Islands in a rocketship, you have to blend in and pretend to be an NPC... or maybe you're the bailiff trying to kill him and/or sacrifice all the NPCs to Satan.
We're not particularly happy with the state of polish and everything, but it's long past that time in a project when you need fresh pairs of eyes to look at it and critique it. So here it is:
Download:  v0.9 PRE-RELEASE BETA
- Windows build (11 mb)
- Mac build (16 mb)
Unzip somewhere and play.
NOTE: only LAN support for now, sorry.

Screenshots and "how to play" / strats / tips, after the jump... 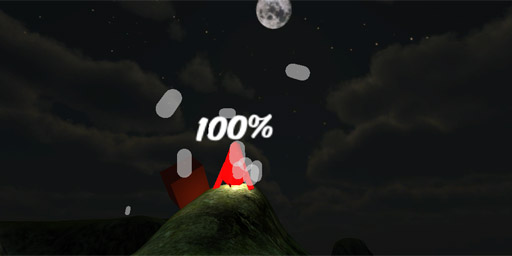 How to play:
WASD to move, Space to jump, Mouse to look.

> DEBES: Charge a rocket to 100%, then make your escape. Alive.
"R" to place both rocket sites, then "R" to drop bibles.
Use bibles to get islanders to fuel your rocketship / pull them out of the satanic altar.
"Mouse1" to blend-in with islanders. (Your "light" turns on, slower move speed)
When the Bailiff touches you, he'll drop waypoints (red blocks) you can follow so you can still maintain your cover. You'll match his speed during this time.

> BAILIFF: Shoot Debes OR collect 50 islanders for the ritual sacrifice.
Touch islanders to put them in a trance and lead them back to the altar.
More islanders in the altar = faster move speed.
"Mouse1" to shoot your musket. It'll scare away any nearby islanders.

at 8:16 PM
Email ThisBlogThis!Share to TwitterShare to FacebookShare to Pinterest