Ludodiegesis, or Pinchbeck's unified field theory of FPS games, or "please pee on my leg and tell me it's raining."

I've also kind of fact-checked my summary with him too, so let this post serve as a Wikipedia article of sorts for piquing your interest in reading the real thing...

“Story as a function of gameplay in First Person Shooters: an analysis of FPS diegetic content 1998-2007.”

Central to his conceptual framework is the idea of "ludodiegesis" -- ludo meaning "play" and diegesis referring to "the fictive reality of the game." (If you're gagging at these words: remember that part about games being a legitimate form of art and culture? Well, we need to invent new words to effectively talk about this new media. So learn this word.)

It's his elegant way of growing something from the rotting corpse that is the narratology vs. ludology non-debate, mainly by shifting what "game narrative" means: 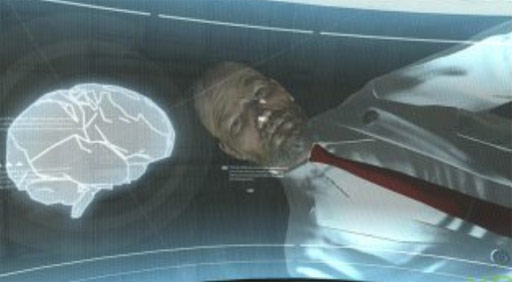 The entire ludodiegetic frame of Assassin's Creed, where the different levels are "memories" and a game over screen is "desynchronization," strikes me as really unnecessary because we all know what those devices really are: another word for level and a game over screen. Hitting a giant wall of gated-off content (literally, an infinite white wall of death in AssCreed) would've been just as disappointing even if it wasn't disguised as a "memory not found" error in the Animus Machine.

Prior knowledge of other video games prevents this ludodiegetic device from working properly -- we see through it instantly -- and as a result, it does the exact opposite of what it's supposed to. It actually breaks game flow with how often you roll your eyes.

Or in the beginning of Grand Theft Auto IV when you're not allowed into Manhattan because of a terrorist alert; it's a ludodiegetic distraction that make me do a double-take before I see it as the functional equivalent of that wooden door my rocket launcher can't destroy, as clever and satirical a device it is.

Of course, AssCreed and GTA are not FPS games, but these same devices could easily exist in a commercial FPS. Even in holy grails like Deus Ex, there are doors with "infinite" strength. Why can't I take the hinges off and use it as a shield? Pinchbeck labels this the "affordance / ecology discontinuity."


("Yeah," says Pinchbeck. But what about the Rio Grande in Red Dead Redemption as a better example of gating content? It's a fast flowing, wide river and it's plausible for the time period / world that Marston cannot swim across it.) 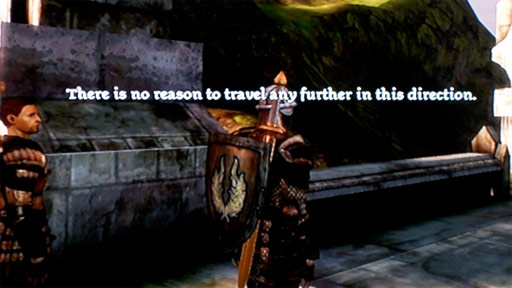 So by trying to explain and justify the existence of these typically heterodiegetic devices, I'd argue that it's ironically amplifying the effect of the ludonarrative dissonance. Or maybe it's ludodiegetic dissonance? OKAY WHATEVER. Let's just dispense with all these semantics using a beautifully trite catchphrase:

"Don't pee on my leg and tell me it's raining," as Judge Judy would say. 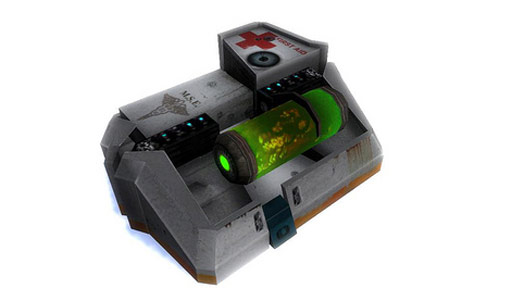 The green liquid glows so you'll notice it; its ludic function is much more important than its narrative function. It is not part of a supply cache seized by rebels, a sophisticated morphine / antibiotic deployment manufactured at City 16 under Commissioner Boris Varykov in the year 2015 with an aluminum-nitrate casing that is more easily mined from the Earth's surface because sea levels are dropping.


"Well," Pinchbeck might say, "at least it isn't a magenta-colored box that says 'Touch me to increment health integer.' It's still the idea that you're a person who's bleeding. At the very least, it's more ludodiegetic than me burning my hand on the stove but then hiding behind my sofa to 'regenerate' it, which is an even weirder instance of game logic than instant health packs."

Fair enough. And really, all this fussing about dissonance doesn't matter in the end...

If a game keeps me interested for long enough, eventually I internalize all the limits of interactivity; I don't try to destroy the wooden door or shoot Alyx. I eventually suspend my disbelief, as jarring as the first incident of dissonance was. That's part of learning a game, these limits on interaction are the grammar of how you communicate with a game system.

In the parlance of interactive fiction, these moments of discontinuity mean maybe we're still learning how to use the parser.

To be fair, Pinchbeck totally anticipated this type of criticism in his dissertation and kinda agrees that this is all kinda bullshit:

Given how often dissonance occurs and the limits of interactivity, he argues that FPS games are not very sophisticated and are in fact very simple ludic structures. It's very easy to break the ludodiegesis of a video game because designers can only account for so many interactions.

And besides, I would argue that the strength of a ludic structure is in how it limits choices in a fascinating way. (i.e. de_dust works because it funnels conflict, not because it gives you "freedom" to explore a city)

That simple underlying ludic structure of almost all FPS games (Section 2.6, pg. 31), when even further simplified to the point of doing a profound disservice to Pinchbeck, looks something like this:
Half-Life 2 is a great example here. By late game, you understand how striders behave and a squad of Combine soldiers is no problem. Plus, the strategic decisions you make at the end of the game in the Citadel are, well, underwhelming compared to the midgame fight at the lighthouse. That was clearly a conscious design choice, because you're supposed to feel powerful at the end of the Hero's Journey and kill God at the end, blah blah blah.

So that's the "ludo" part: crass and primitive, but we still love them for it.

Now's the work of justifying Pinchbeck's larger shift of focus from narrative to diegesis.

Yes, a "story" isn't just a world; a story has stuff happen, which means it's some kind of sequence of things. (This was one of my main objections to the walkthrough interaction of Dear Esther; everything happened already. And like Lewis Denby's Post-Script after it, the ludic structure is the same: walking through static environments. Which is okay, but ultimately limiting when you consider the range of player narratives in Minecraft.)

Story is also contained in the object itself, not solely in the player's perceptions. (Strangely, what I liked most about Dear Esther was the opposite of that assertion, that I was struggling to assemble this fragmented thing and bringing parts of myself into it -- and this statement also seems to conflict with one of the creative mandates of notgames.)

In Section 3, Pinchbeck expertly condenses existing discourse on narrative theory. If you're interested in games and narrative at all, you should read this section in its entirety. (PDF) At the end he settles on Barthes' theories of "protonarrative" units, which I can barely understand with my limited intelligence / won't bother explaining. In general, the "proto-" prefix helps us avoid any hang-ups with the grand narrative theories that paralyzed the narratology / ludology debate and we can move on to details and concrete examples instead of tautologies.

What's most important here is how Pinchbeck is arguing for a conceptual shift from "narrative" to "reality." Remember, it's not ludonarrative; it's ludodiegetic. And because a prominent feature of these games is the environment, a "story-world" or story is a gameplay function: "it has a direct influence upon player behaviour, managing both the discontinuity and what the player actually does whilst playing." 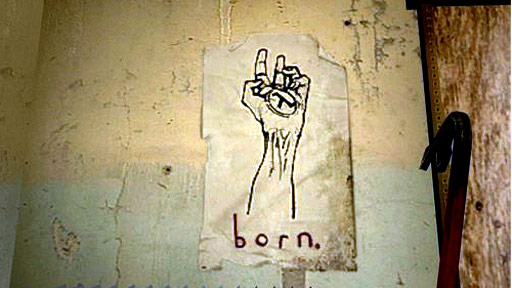 It is the reason why Gordon Freeman is a hero and not a bloodthirsty sociopath. These ludodiegetic devices are protonarrative units, in-game stuff you use to assemble your idea of what's going on.

However, these interpretations don't vary from person to person -- we all have roughly the same idea of who Gordon Freeman is as a character. And because you identify with this characterization and gameplay, you more easily reconcile any dissonance ("Of course I'd have a super gravity gun, I'm the Free Man!") which results in a stronger flow state / engagement with the game. Which is good, I guess?

He takes another sip of tea, adjusts his glasses and looks out the window. Tomorrow, new glasses. Was Portsmouth always this dreary? He's felt like this for years now, like a permanent jet lag that's been steadily getting worse ever since Jeroen showed up, always smoking that bloody pipe of his... Hmm, a smoke would be nice. 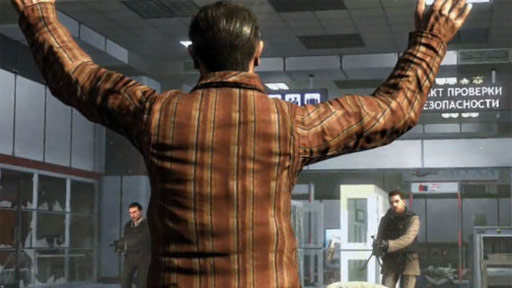 Already we see a lot of his model breaking down if you look at some recent AAA FPS games: Metro 2033, Bioshock 2, or "No Russian" in Modern Warfare 2.

... Not to mention the indie scene. Consider the highly commercial, extremely popular, zeitgeist-defining FPS of our time: Minecraft. It is a religion, teaching tool, and meme-generator all at once.

Minecraft also has a profound lack of structured goals, compelling environmental interaction... and most importantly, up to a point, the world gets more complex the longer you play. Artificial structures make the world more complicated and allow for more emergence. The level isn't easily "solved" for a while.

(A solved state, I guess, would be a large surface area lit by torches with no enemies and tons of artificial structures that appeal to the players' vanity. Which certainly happens, but is somewhat rare among the entire player base.)


"Okay, " says the fictional manifestation of Pinchbeck, "maybe I wouldn't stand by some of these arguments anymore. That's a good thing, that means the genre's moving. But we have no idea how much the genre is moving because we have no data; no one is doing basic, methodical data-collection on video games like I did. Why not?"

I'd propose these reasons:

1) To analyze and understand ludic structures, you have to be fluent enough in that tradition to skillfully play them AND have an understanding of game development. Most people don't have both. Comparatively, a book is much more straightforward for Jesper Juul to digest than Starcraft. Like, I could totally beat Jesper Juul at Starcraft.

1b) If you understand game development enough, you'd probably rather make your own game than spend time cataloging someone else's. (My personal excuse.)

2) Multiplayer games are time-based. Counter-Strike 3 years ago is very different from Counter-Strike now; and don't even get me started on Team Fortress 2. Because the "text" is constantly in flux, how can we read it and analyze it? We'll get car sick.

3) Imagine trying to comprehensively analyze something EVE Online; you'd need your own Department of Eve-olgy... and then the university would pull your funding after a year anyway.

* * *
If you're an undergraduate game studies student who got here through Google and you have a paper due tomorrow, here's how you should cite Pinchbeck's dissertation:
You're welcome. Now get some sleep, you're a mess.
at 11:00 AM
Email ThisBlogThis!Share to TwitterShare to FacebookShare to Pinterest