"It belongs in a museum!" 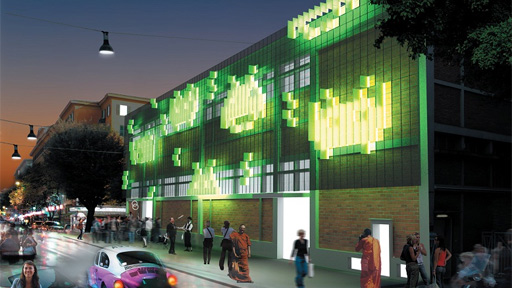 It was all tucked-away in a half-hidden nook on the lobby level of the Museum of the Moving Image: games.

Several kiosks running Space Channel 5, Katamari Damacy and other critical darlings that represented an uncharacteristically decent sample from commercial canon. Aha, perhaps the curator was a fellow gamer! And far, in the very back of the exhibit was a dim chamber housing a lone pedestal, a keyboard, a mouse and a projection of Half-Life 2 on the wall.

The game was still stuck in the train station, the part where the guy mutters, "Don't drink the water," as if you could. So at least one person (probably more) tried playing the beginning of this era-defining computer game and stopped after the first few minutes.

I was angry. This was art and no one was appreciating it! 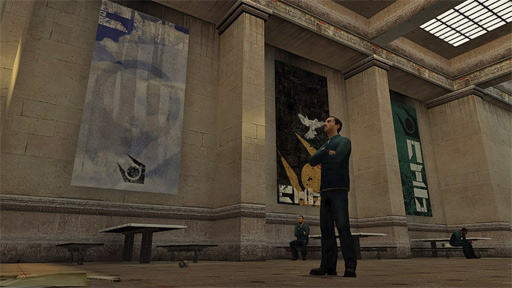 My first instinct was to blame the curator. No instructions or explanation? You couldn't be arsed to plug-in a gamepad? It's certainly not Valve's fault that no one's playing it!

I turned on god mode and began spawning antlions with console commands all executed from muscle memory. Developer 1 sv_cheats 1 god notarget impulse 101? Bind y "npc_create npc_antlion"; mat_wireframe 1. Clearly this copy of the game was now tainted forever, and it was my duty to poison the kiosk and teach the curator a lesson. Though s/he likely wasn't a veteran Source modder like me, right? Who can blame the ignorant? They know not what they do.

So when it came time to install my own game kiosk in the lobby of my design school, I was intent on doing it right. I pulled an all-nighter to foolproof the stability of my mod. I scripted an attract mode loop. No keyboard, just a gamepad. Options menu disabled, quit button disabled. Extremely simple gameplay. Lots of text prompts to direct the player. I even modified the level scripting so you never needed the "use" key. The player just had to pick up the controller and enjoy my awesome genius! Finally, a person who lived and breathed games would show these silly "new media" fools how it's done.

I sat on the other side of the lobby and waited. About 15 minutes later, a guy and a girl walked up. The guy even put on the headphones! Success!... Wait, what the hell was he doing?

He was running around in circles, jumping and tea-bagging the NPC whom I had lovingly scripted and textured. For fuck's... but that was the part where he was supposed to question his own existence and suffer a soul-crushing epiphany by my authorial hand! (Okay, and maybe it was partly my fault for making a crappy game. Whatever.)

I was angry. This was art and no one was appreciating it!

In his monograph Homo Ludens, Johan Huizinga defines three player types: the player who plays, the cheater who pretends to play but secretly manipulates rules, and the spoilsport who breaks the integrity of the game entirely and openly challenges rules. To the players' eyes, Huizinga claims, the spoilsport or griefer is much worse than the cheater because the "magic circle" protecting the game is broken. However, a lot of games scholars will shit on Huizinga because his model seems way too simplistic -- for example, the game B.U.T.T.O.N encourages you to be "brutally unfair" but if it's possible to be "too unfair" (e.g. concussing everyone else in the room with a sledgehammer is "too unfair") then what is the line between playing / cheating / spoilsporting if not fuzzy, indistinct and constantly shifting?

But to me, it was clear that guy was the kind of player who turns off the screen, shuts off the console and concusses everyone else in the room with a sledgehammer. He wasn't playing by the rules. He was performing. He was a Spoilsport with a capital S, the fool who'd rather (try to) impress some girl (she was totally above his league, by the way) than experience the Art of my Magnificent Masterpiece. That fucker.

The whole ordeal / shame of my profound failure was enough to make me question why dedicated video game museums are necessary or whether they would even be successful, as well-intentioned as they are.

Can you imagine anyone walking into a museum and just "picking up" System Shock 2? Let's further suspend our disbelief and pretend this complete novice to System Shock 2 will play it sincerely, without concern for looking cool in front of their friends or to impress someone or to be polite to nearby strangers: they would visit the vending machine on deck 2, then get killed by the zombie that gets spawned right behind them. Game over. Complete understanding and appreciation of the game -- accomplished? 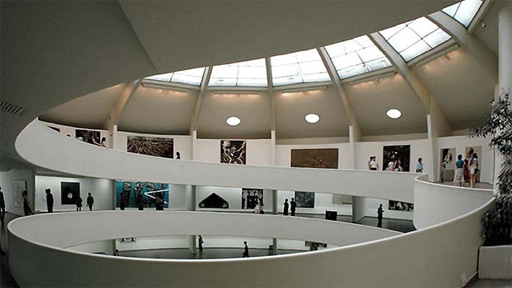 To summarize the point of this rant, several pages too late: if you can only understand and appreciate long narrative-based single player games by playing through them, then the public air of a museum often prevents us from playing them sincerely or capably.

If so many of our beloved video games are so utterly unplayable and unpresentable in the harsh sunlight of a public venue, then is it possible to faithfully curate any museum of all video games? Any long-form narrative-based single player FPS, RTS or RPG is impossible to appreciate because no one can sit down for 5 minutes and understand the entire system of mechanics and story before them.

Besides, what is a museum but a place for drowning, where you're forbidden to interact with (i.e. touch) any of the valuable dead things mounted on the walls... because some asshole will always inevitably start teabagging the Mona Lisa or turn on developer mode and spawn antlions all over The Starry Night, right? In public, we're all spoilsports and griefers, because to play a video game sincerely and take such a "diversion" seriously is to appear to be a loser at real-life.

The magic circle of a museum supercedes the magic circle of games and encourages the griefing of games, to spend 1 minute looking at this thing then 1 minute on this other thing, a pattern of disengagement that seems fundamentally in tension with how we play long-form single player games or read long novels or watch long films, the same things we might often cite as artful masterpieces but defy public exhibition.

It belongs in a museum? No, it belongs in the private detritus of your bedroom, among empty cups and so much soiled laundry.
at 4:35 PM
Email ThisBlogThis!Share to TwitterShare to FacebookShare to Pinterest