What games can learn from Sleep No More (part 2): specific and spoilery design observations 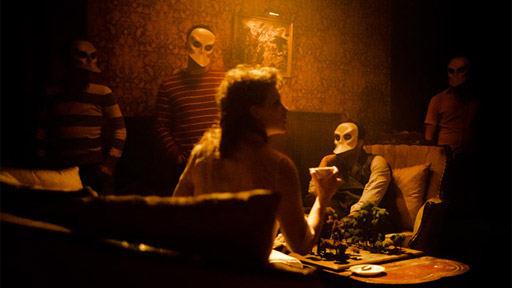 SPOILER WARNING: this will definitely ruin the novelty of the show for you. Read further only if you have no intention of ever going to see this. Ever. Yes, it's worth it. If you live in New York City or nearby and can afford it, you should go, otherwise you're an idiot. Non-spoilery Part 1 offers a general overview.

Sleep No More starts like this: You wait in line for a while. It's probably a bit cold.

You walk down a long, dark hallway. You wait in line to check your coat.

Then you walk up to a contemporary-looking reception desk and give your name / reservation.

They hand you a playing card instead of a generic ticket. This is a playful experience, says the playing card.

You climb some stairs, and enter this snaking corridor made of draped black cloth, filled with spooky noises coming from speakers behind the cloth walls. This is similar to how most American haunted houses are setup: again, the show is winking at you. It is fully aware of what tradition it is operating in, and knows that you know, and now you know that it knows that you know. Still, it is spatially disorienting, and you probably forget which way is north. You're entering the magic circle, you're down the rabbit hole, blah blah blah. 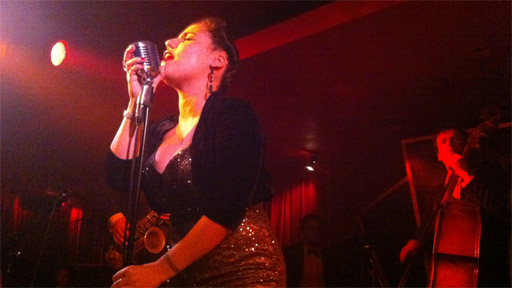 You emerge into a hallway, leading into a 1930s style lounge bar. Smoke fills the room, characters in period dress talk like they're from The Maltese Falcon, and a lady in a sparking dress is singing on the stage. This is the game lobby, where you wait to join in.

Your playing card determines your boarding order into the hotel proper. This is their light attempt to separate couples and groups, because they argue being alone and anonymous is important. (They're half-right.) I saw a guy try to sneak in with his girlfriend, even though his card wasn't called yet, and the host character got really angry with him and had security sit him down. "He just wants a good time," explained his embarrassed girlfriend.

Once you enter, the host hands you a mask. (NYC technically has a no-mask law in-place, so wearing a mask actually feels a bit illegal and transgressive. You get to flout the law.) You're told to put it on and keep it on. 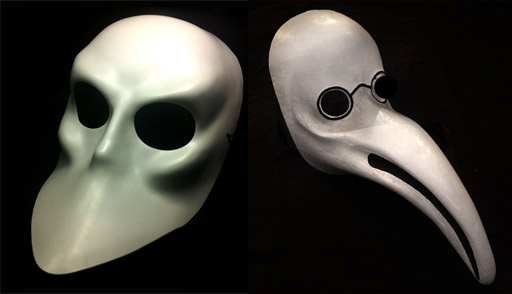 The mask itself is very well-designed: it is modeled off a Venetian carnival mask, and the sockets are slightly inset to darken your eyes -- you generally can't see anyone's eyes, which means you can't read another audience member's facial expression. At the same time, the large duck bill allows you to breathe easily (though some claustrophobic people still get anxious) and it doubles as a pointing device. This way, you know what people are looking at, but not what they're feeling.

... Then, while waiting for the elevator, you're told the ground rules: no photos, don't touch people, and don't try to hack the game because security is always watching you. Your group of 20 boards the elevator.

The elevator stops. "Everyone off!"

The person at the front steps out of the elevator -- then the bellhop shuts the door behind him, stranding the fool on that floor alone, and proceeds to the next floor.

"Things aren't always what they seem here. Trust no one." 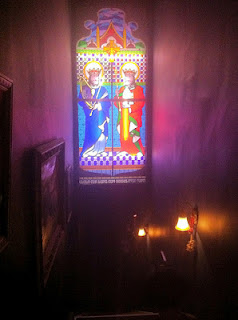 You reach the "top," or what you think is the top. Other masks are already roaming around. You're not really sure what to do. You immediately realize how fragmented everything is: a boutique might lead to a forest might lead to a hospital ward might lead to some bathrooms might lead to a chapel might lead to a detective's office. This is a figurative architecture; traditional wayfinding is no good here. Any spatial connections you make between the rooms are purely abstract.

Suddenly a character bursts into the room, with a trail of masks following behind her. She forcefully brushes you out of her way, as if you're just another bush in a jungle. This is where Sleep No More shines, the actor-audience relationship:

0) Actors rarely acknowledge you except to shove you out of their way; sometimes they pull you aside to do a dance for you (they can touch you, but you can't touch them) and then instantly everyone else is jealous of the private performance.

1) You learn that every mask's presence in a room is like a +1 vote, a greater likelihood of a followed dancer doing something interesting or their prominence in the narrative. (Near the end, no one was following the maid, so we didn't follow her; meanwhile, there are always at least two dozen people following the Macbeths) If you ever lose track of a group, you're just as likely to find another mass, running across your path. You're never lost, even though you have no idea where you are.

2) Some dancers slip into the crowd wearing a mask; then they throw their mask off and join in the performance. It conflicts with the first rule they told you not to break -- which makes you always a bit suspicious of your fellow masks. You may also briefly consider the fantasy of taking your own mask off and doing your own kind of dance, only to notice the pair of eyes watching you in the corner.

2b) ... then you might realize what real-life anonymity means: you can mess with other masks. Some of the level design facilitates this better than others: one part features a padded insane asylum room. I saw one guy wander inside to explore, so I ran over and slammed the door shut, trapping him inside, and then ran away. For a brief moment, his mind literally exploded... I know this because my friend did it to me a few minutes before. I wish the environment had more "toys" like this to facilitate audience-to-audience interactions, or if there truly were more toys like this then they need to communicate their affordances as effectively as that padded room.

3) So yes, if you see a lot of masks, you know that there is probably more than one dancer there, and that some serious shit is going down. The dancers' paths often intersect with other dancers, and introduce you to new characters. About midway through the night, all the characters converge in a gigantic ballroom dance sequence which is totally riveting -- they laugh and mime the gestures of a party, but without saying any actual words. It seems like you'll just naturally wander into this giant setpiece they wanted you to see.

4) When dancers leave, the lighting in the ballroom dims. If you see a dim room, you know that room is unoccupied and you can chill out there, or the room is boring and you should look elsewhere. I thought this was generally the most subtle cue and was impressed when I finally realized how complex some of the lighting rigs were.

5) In contrast, I was disappointed by how instrumental the sound design was.

The most disappointing instance was when a character got murdered, and a witness literally took a bell out and started ringing it so that masks would know to come over and witness This Important Plot Point. Also, I don't think this technique of "PLAY LOUD SOUND SO PEOPLE COME" would work in a video game because it requires a normal ambient setting of relative silence, and generally I think games have more sophisticated sound design.

6) However, my favorite moment (by far) in Sleep No More involved the level layout. There are about 5 floors (I think?) and various stairwells to move in between them. The elevator puts you at the 3rd or 4th floor, I believe. If you keep going forward from the elevator, the first room you enter is a recreation of the crowded smoke-filled game lobby you were waiting in, same exact room layout and everything, except this time it's probably empty and mostly silent. Rooms have doppelgangers!

Then, gradually, you make your way down to the 1st floor -- except you're not really sure if it's the bottom, or how deep this thing really goes, so you keep exploring. Then you hear a lot of people, laughing and singing and drinking, and there's a lot of light and glitter through that door over there. Did they hire 100 more extras to fill in this party scene? Another doppelganger lobby room?

... then you realize that this is the real actual game lobby, and you're back to where you started. The "actors" here are audience members unwinding and sharing stories. For the last hour or two, the show has trained you to think:

So when you come back down, you've forgotten what it's like to socialize with someone. Indeed, I hesitated before taking my mask off because I wasn't sure what was part of the show and what wasn't. Sleep No More conditions you to react to certain stimuli and memories as part of "the show", but then it blurs the lines between show and not-show, resulting in this unique cognitive dissonance when you finally descend.

7) Eventually, the show ends with a climactic last supper scene. Then, a bunch of people come out and tell you to leave, which was incredibly blunt but I guess they have to be blunt, otherwise we'd assume it was another trick.

On your way out, people try to sell you overpriced coffee table books that "decode the narrative" for you. Fortunately, very few people bite. However, this last moment kind of depresses me: it suggests that they aren't even aware of the magic they've made, that they think the "character development" is what's compelling about this production. It's like someone saying Dragon Age is cool because the codex entries are fun to read; but again, I firmly believe that lore is stupid! (In contrast, plot and action are compelling.)

I do feel that many game environments are so obsessed with seeming like "realistic, living breathing worlds" that they forget the special power of not being rational. Much of the power of Sleep No More comes from breaking societal norms, or even their own unique rules that they take pains to establish, only to violate later. I wouldn't call it a "twist" because there's something patronizing about that term -- but I think many video games could learn from stepping outside their own magic circle, to violate or destabilize their own systems to produce novel aesthetics and commentaries.

Regarding anonymity, I suppose the closest comparison are games like The Endless Forest / Journey. I'm not as interested in this aspect, so I won't really dwell on it. Similarly, the question of whether "Sleep No More is a game" is equally uninteresting and pointless to me, and generally "is X a game" critiques tend to boil down whether you want to disparage something or not.

There is, no doubt, a lot of stuff that I missed in Sleep No More. This is not a definitive guide nor walkthrough, and if you had different experiences I'd welcome your comments. You only see so much in one playthrough. However, knowing the various tricks they use to lure and guide people, I don't think a second playthrough would have the same effect. I'd probably spend most of the time trying to break the system without getting caught.

Which is, oddly enough, what the Macbeths try to do.
at 1:14 PM
Email ThisBlogThis!Share to TwitterShare to FacebookShare to Pinterest