The Game Studies of Game Development 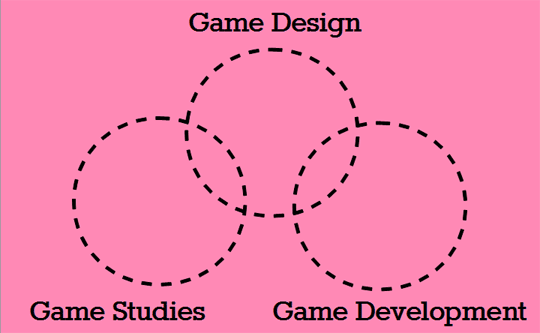 This is an excerpt from "Queering Game Development", a talk I'm giving at QGCon (October 26-27) at UC Berkeley. Registration is free and open to the public.

You could see "games", as a complex field of theory and practice, as roughly the sum of three sub-fields: Game Studies, Game Design, and Game Development.

Game studies is generally the study of games as culture and media, games as symbols, games as performance... and all the meaning that arises from that. A game studies reading of Monopoly might look at how it represents capitalist ideas of ownership and achievement, or its history as originally the "Landlord's Game", an anti-capitalist game about exposing tenant exploitation.

Game design looks at games more as rules and components, at the way that strategy or story emerge from play. A game designer's reading of Monopoly might look at the probability distribution of dice rolls and the board layout, and the payoff matrix for making certain decisions. A game designer is especially interested in the operational rules required to play the game, as well as the different roles that players might perform. They ask many of the same questions as in game studies, but with more of a focus on articulating what a "good game" is; they are oriented towards making things.

Game development looks at the implementation of games, at the workflows and engineering and processes in designing and building, both analog and digital games. A game developer's reading of Monopoly might look at the different ways of porting different Monopoly themes (what's the difference between Star Wars Monopoly and Scooby Doo Monopoly?) or maybe porting it to a digital game -- how do you make an Monopoly AI? How do you store game data? Is it a 2D or a 3D game? Which will take less time to develop? What's a better way to produce this thing?

(These definitions are very loose and not meant to be exclusionary... it's meant more to give you a general idea of where I'm coming from.) 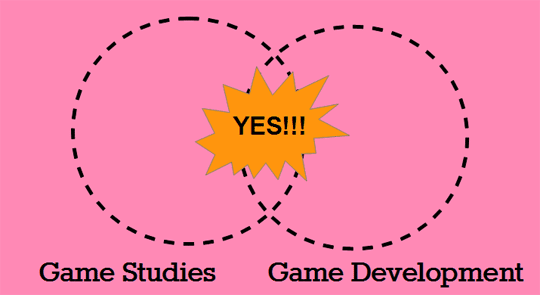 Queer and feminist critiques of games often rely on high level conceptual approaches to games -- that is, analyzing games as cultural products or media objects. The game developer's response is to go technical and go low-level, to argue that their game engine could not support playable women characters, or to argue production schedules allowed no time to support queer content, etc.

Ignoring temporarily how those are bullshit reasons, what if we chased them into the matrix?

Interpreting programs as texts is interesting because programmers must wear their intent on their sleeves. Code projects routinely have more than one author; open-source projects often have dozens, if not hundreds of authors, and ideally each contributor will register and flag their intent.

A program is well-designed when you can tell what design patterns the programmer followed, what naming conventions the programmer used, and how each part of the program interacts with a different part of the program, etc. A theoretical "source code repository" of The Great Gatsby would consist of all of F. Scott Fitzgerald's revisions and drafts, his marginalia, his notes, timestamps for every single tracked change... a treasure trove of evidence beyond any scholar's wildest dreams. But in software development and game development, this type of "version control" is standard AND freely available! Why aren't we diving in?

Because I'm a teacher, I see this as an education problem. We need to educate more people in code literacy AND in the methodology of cultural study. I'm not saying all games scholars and designers should become John Carmack or Judith Butler, and code their own 3D engines that disclose gender performance as a mode of existence, but I think being able to read and interpret the actual source code of a program is a powerful analytical lens for studying how people go about making games and how certain games work.

And if you don't already know how to do this kind of stuff, then we (me and my many allies) look forward to teaching you how.
at 1:02 PM
Email ThisBlogThis!Share to TwitterShare to FacebookShare to Pinterest