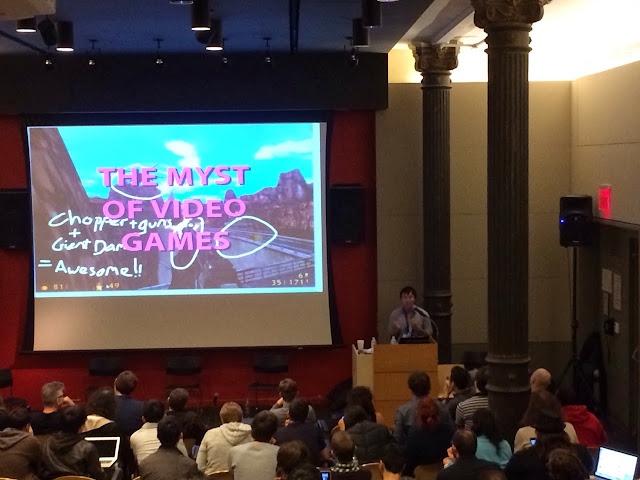 Very special thanks for Frank Lantz for inviting me to speak, and to Charles Pratt / Kevin Cancienne for counsel and emotional support, and Brendan Keogh / Dan Golding for convincing me that people even want to hear about stuff like this. Many of the ideas in this presentation will be expanded upon for the book I'm doing with Press Select.

First I want to set the record straight: I love Half-Life, but that doesn't mean it's immune to criticism. It is flawed in many ways. (Hard mode is too hard. The game is too long. On a Rail induces hemorrhaging. etc.)

I also think games mean things so far as you can argue for certain interpretations -- and I think Half-Life's popular legacy does not endure much scrutiny. Specifically, Half-Life's narrative is not subtle nor sophisticated nor conceptually innovative: from what we know about its development history and acknowledged inspirations, it is designed to be a schlocky silly action B-movie about a sci-fi disaster conspiracy, and I argue that reading is more convincing than thinking it's "the Myst of video games" or something.

That does not mean a schlocky game is bad; schlocky games are often fantastic. What I'm arguing, instead, is that many players prefer the weaker reading of Half-Life because they are seduced by the promise of technology without actually understanding what the technology is doing. Half-Life is magical and interesting and subtle, but not in the way that gamer culture mythologizes it. (At the same time, let's still be critical of what Half-Life does, and the values it represents to both players and developers.)

(Many of these slides will not make 100% sense without me, shouting an explanation or anecdote at you. I'm not sure when NYU Game Center is going to put up video recordings of the talks, etc. but I'll update this post when I know...)

I propose the "Well-Made" as a more technically-minded counterpart to the Well-Played series of books. The Well-Made might look carefully at certain representative parts of a game, or it might also survey general engine architectures as in Fabien Sanglard's fantastic idTech engine overviews. I'm reluctant to prescribe a format here because each game is highly contextual; I think Half-Life benefited from looking at specific setpieces instead of its code modules, but a more systemic game might emphasize its code processes more.

Mostly, I just want to get away from the idea that technical stuff is scientific and engineered, but not artistic and creative. Good game development isn't about well-crafted pieces, it is more about the relationships of those pieces and whether you could make the connection. I think Valve developers saw many of these connections and I wanted to share their implementation choices as case studies in game development. Such a case study or a Well-Made would be a powerful learning tool for other game developers, or maybe even just plain good reading for anyone interested in how some games come together.

at 12:53 PM
Email ThisBlogThis!Share to TwitterShare to FacebookShare to Pinterest