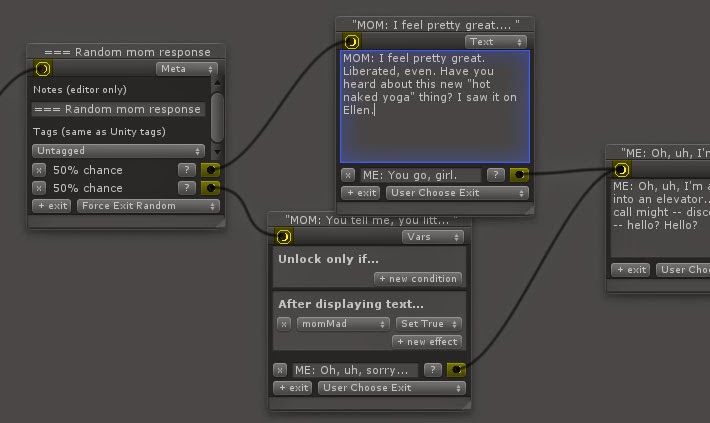 I was prototyping a game concept with branching dialogs for conversations and/or CYOA story events, so I started looking at various solutions on the Unity Asset Store. Dialoguer looked the most decent, but generally all of them just made too many assumptions or enforced bad workflows, and seemed to ignore what made Twine so accessible.

So I've decided to make "Bramble", my own editor plug-in and system for Unity! Here are some factors in its design: 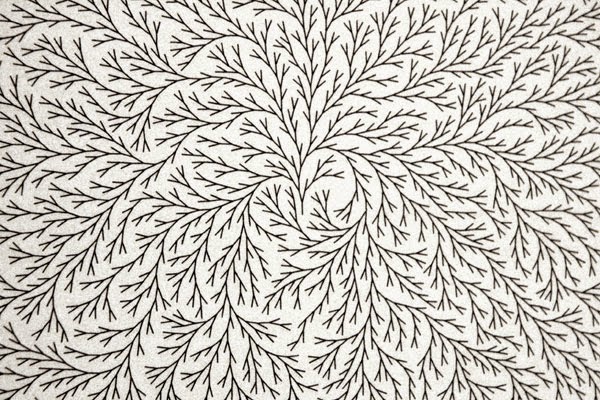 I think narrative design in AAA has suffered greatly from a lack of cross-pollination and intersectionality. Instead, it seems more like a culture of assimilation, of well-meaning but misguided workshops about teaching novelists or screenwriters or playwrights "how to write for games." I imagine the technical instruction in these workshops usually consists of the words "use Excel" and some quote from Sid Meier. They can't imagine writers having roles other than "auteur director with near-complete creative control" or "low level script grunt who has to write 20 different ways for ex-military mercenary NPC to tell the player he has low health", and it seems like there is very little in-between (or at least, very little they are willing to discuss)

So a lot of my thinking on this comes from skilled practitioners who share their workflow openly -- specifically, Emily Short's excellent reflection on writing her IF "Bronze" has been super instructive and helpful for me. If we want to design better narrative design tools, we should actually look at how skilled practitioners are doing narrative design and study their workflow. Notice how Short re-arranges events and geography constantly? A robust narrative design tool should support this type of flexibility and iteration.

At the same time, "the answer" is not going to be found in one creative community alone. I think a contemporary approach to narrative design should look at parser IF, choice-based IF, hypertext editors, multiplayer first person shooters, wikis, detective novels, word processors, screenwriting writing software, music... If we want games to be intersectional and reflect several different communities at once, then maybe we also need to apply that methodology to game development tools as well.

Telling writers to "use Excel" is the useless rhetoric of self-proclaimed programmer-kings who see narrative as interchangeable text strings instead of worlds or systems unto themselves. Let's do a little bit better than a spreadsheet, shall we?
at 11:30 AM
Email ThisBlogThis!Share to TwitterShare to FacebookShare to Pinterest