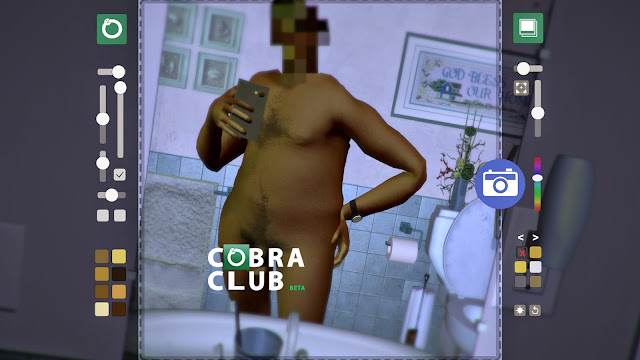 This is a post detailing my process and intent in making Cobra Club. It has SPOILERS; if you care about that kind of thing, then you should probably play the game first.

Cobra Club is a photo studio game about taking dick pics. Ideally, lots of them. As you take dick pics, you also chat with NPCs and potentially share / swap dick pics. It breaks with my previous three gay sex games (Hurt Me Plenty, Succulent, Stick Shift) in that there's little control of the character himself, there's a complex interface, and there is no visual innuendo. In this game, a dick is a dick.

But it's not just a dick, it's your dick!... Well, kind of. To me, that ambiguity is what elevates it slightly above a mere dick pic generator.

A lot of the initial thinking behind Cobra Club came from the notorious Last Week Tonight with John Oliver interview with Edward Snowden, where he frames government mass surveillance (specifically, NSA surveillance and the Patriot Act) in terms of dick pics.

My initial idea was a dick pic generator, to allow people to flood the internet with more dick pics, as a form of protest. Initial prototypes let users anonymously upload images to Imgur directly from the game, thus contributing to the total proportion of internet data that consists of dick pics. For freedom, or something! This (cw: nudity) initial "DickPics4Freedom" prototype wasn't too interesting because conceptually, it's funny only because it's non sequitur, and it says nothing else. What is this freedom? What do dick pics actually say about freedom? As images, how do these fit into an artistic tradition of self-portraiture, much less a tradition of dick pics?

Turns out, some redditors got the same idea independently, which is probably a testament to how obvious and boring the idea was. If you look at the (cw: nudity) r/DickPics4Freedom subreddit, I'd say 95% of them are bad dick pics, endless columns of basic cocks cycling through the same poses and same fluorescent lighting. 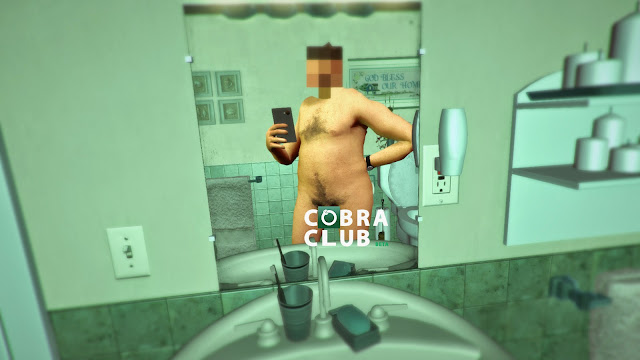 Gay dudes have been trading dick pics online for centuries. In gay dating networks, your body pic / dick pic is a promise as to how great the sex is going to be, while your face pic is where you show how attractive and normal and safe you are. (Given the history of gay men being targeted for attacks via gay apps, safety is always a concern.) There's an implicit private life / public life divide.

Purpose-built gay male dating sites like Adam4Adam let you "lock" certain photos from most users unless you specifically unlock it for them. So the typical use-case is to chat someone up, and then unlock your dick pic for someone to show them that you mean business... except some users are closeted or "DL" (down-low), so instead of locking their dick pic, these guys are locking their face pic. Yes, their dick is more public than their face. 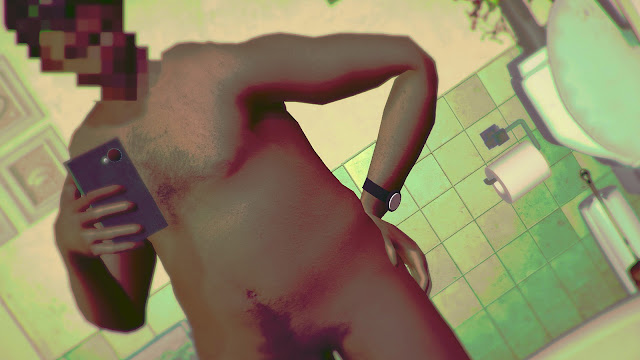 As I see it, there are three play strategies in Cobra Club: (1) make a really weird "funny" dick, (2) make a "good" dick pic, (3) recreate your "actual" dick (if you have one) as faithfully as possible. People who play in public will likely go for option 1 to diffuse awkwardness, but without an audience that'll probably get kind of boring. Even option 2 is surprisingly intimate, it forces you to visualize and articulate what your "ideal" dick looks like, to expose your supposed fantasy.

This is basically how I feel in nearly every game with a character creator, where often the closest racial analogue to asian people is elves or some shit. If these games are power fantasies, am I going to fantasize about being white? Should my players fantasize about having huge logs?

Interfaces have default settings, and default settings imply ideals. This is a heavy concern with "character creators" in most video games; who are the default Commander Shepards or default Bloodborne hunters of the world? (The answer is left as an exercise for the reader.) But the most epic trainwrecks in interfaces and representation are outside of games, like Apple's emoji specification, or the poor East Asian language support in Unicode. Those debacles are about defaults and limitations built into specifications by some very human designers. 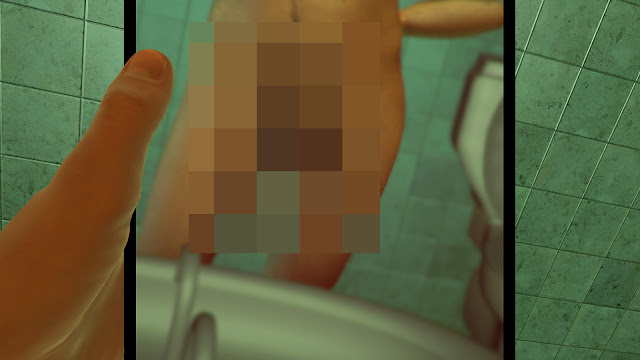 My dick creator is no different, it is an interface with politics, and I've tried to address that. The skin color palette order is randomized every playthrough, and every player's starting skin color and default dick specs are randomized at initialization, and first-time players will have to wait a few minutes to learn how to unlock advanced dick controls.

This is vaguely similar to Facepunch Studios' multiplayer open world game Rust, which assigns players an unchangeable skin color, but that still doesn't seem quite right to me. That implementation treats race as some sort of immutable trait or fact, when ideas of whiteness / blackness / bodies are artificial constructs subject to societal norms (etc.)... that said, race isn't exactly interchangeable like color swatches, right? These are all fantasies about how race works, or how penises work.

My implementation is definitely not correct because it wants to be read as part of the "character creator" game engine tradition, which interprets race as data instead of a process. I try to "compromise" with a little bit of semi-permanence at the beginning, but ultimately I pull-back and try to expose as many variables as possible. I even have a "disable hernia protection" setting that causes your dick to spin erratically and contort as if attached to a jet engine. Let this fake body be fake! 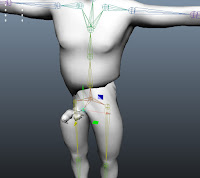 Hopefully that digital weirdness helps to establish a sort of "safer space" to explore dick pics. Critique My Dick Pic, run by Madeleine Holden, has a clear trans-inclusive, race-inclusive, no-shaming policy to try to facilitate a safer space as well. Her critiques are often funny and disarming in how formally they treat dick pics, but they always seem honest and earnest.

In her dick pic reviews, she makes a case for a certain progressive feminist dick pic aesthetic: one that values the whole of a body, the posture, the hand placement, the lighting, the background. She has a particular distaste for gag dick pics, characterizing them as lazy, and she harshly grades "log" pics that prioritize size above all. While embracing these dick pics as art, she also maintains the importance of confidentiality and acknowledges the importance of honoring privacy. 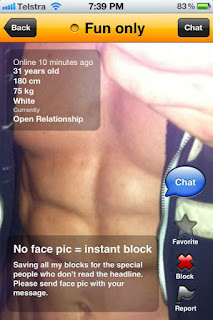 Dicks pics are often composed in bathrooms because bathrooms afford two important things: a mirror, and guaranteed privacy. In Cobra Club, I attack this privacy in two ways:

First, every 5 minutes or so, your mother will knock on the door and ask if you're doing okay. (The mom is performed by the amazing Nico Deyo. Thanks, Nico!) The fiction is that you're doing this in your mother's bathroom, with some "God Bless Our Home" needlepoint decorating the back wall. (I think it's kind of funny.) The Mom AI will leave you alone after about 20-25 minutes, but not after she hints that she knows what you're doing in there, because, well, a mother always knows.

Second: as the player takes more dick pics, and time elapses, the game secretly sends your dick pics to a server which posts it to a public tumblr. (This server acts as a "middleman" proxy to anonymize your image uploads, and keeps no logs of its own.)

After about 15-25 minutes, the player will be bombarded with messages about a government spy database "COBRACLUBB". Tumblr posts contain a dick pic, a partial chat transcript, and a hashtag of a username to show them all their logged posts. (For this reason, the game prevents users from typing in their own username, possibly sending identifying information to the tumblr. Players may only use generated usernames, for their own protection.)

(UPDATE AS OF DECEMBER 21, 2018: due to Tumblr's draconian anti-sex rules, the game server has been patched to post to a Twitter account instead of a Tumblr. Feel free to follow @CobraClubPics for all your fake player-generated dick pic needs.)

The argument here is that the privacy and respect promised by Critique My Dick Pic cannot co-exist with the danger highlighted by Can They See My Dick, while the pure instrumentality of DickPics4Freedom seems really bland and ahistorical without the progressive approaches to sexuality of the last few decades.

This is the main symbolism behind using an ouroboros for the Cobra Club logo, besides amusing implications of auto-fellatio. These loops and cycles of oppression connect all of us.

At the end of the game, the player is banned on vague and arbitrary grounds because the player legally consented to it by agreeing to the EULA at the beginning of the game. To play again, the player must clear all their account data and create a new account... and so the cycle continues.

(For an update on Cobra Club in late 2018, see the post "The end of Tumblr and Cobra Club")
at 3:04 PM
Email ThisBlogThis!Share to TwitterShare to FacebookShare to Pinterest