On my games being twice banned by Twitch 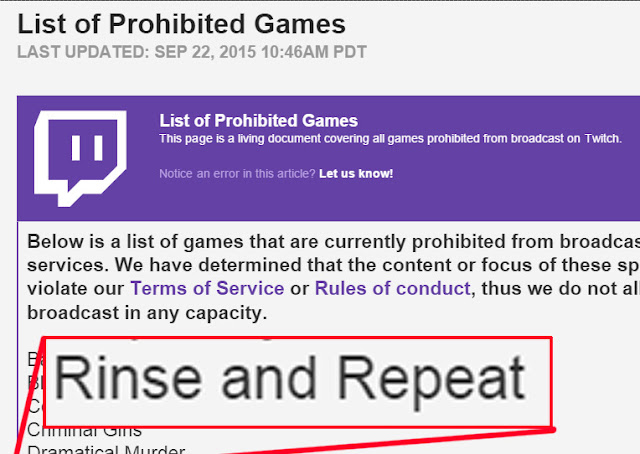 My newest game, Rinse and Repeat, was banned from all broadcast on Twitch about 4 days after it was released. It joins my previous game, Cobra Club, which was banned shortly after its release as well. I am currently one of the most banned developers on Twitch.

On one hand, it is extremely validating as an artist to be acknowledged as "dangerous" -- thanks, Twitch. On the other hand, the Twitch policy about sex and nudity is shitty and I'm going to complain about why I hate it and feel it's unfair, and also really unhealthy for video games as an artform.

Here is Twitch's rule about nudity in games:


Sexually explicit acts or content: Nudity can't be a core focus or feature of the game in question and modded nudity is disallowed in its entirety. Occurrences in game are okay, so long as you do not make them a primary focus of your stream and only spend as much time as needed in the area to progress the game's story.

This is a blanket ban on any game that is popular enough to get Twitch management's attention, and heavily features nudity. It erases the context of the work and ignores how the nudity is presented, instead focusing on a nonsensical formal distinction where "nudity is OK if it's only a fraction of the game."

That means Twitch treats my games exactly the same as the disgusting RapeLay, a game that I won't even bother describing here. This equivocation is offensive to me, when I focus heavily on ideas of consent, boundaries, bodies, and respect in my games.

But what really pisses me off is that my games actually earn their nudity, and cannot function as artistic works without it. Then here comes Twitch, which argues that some blue alien chick boobs in Mass Effect are OK to broadcast because they're obviously there for some bullshit titillation? The totally unnecessary exploitative bullshit of Dead or Alive babes, or Metal Gear Solid's Quiet, is somehow more appropriate than a game about consensually scrubbing a guy's back? (While we're at it, let's add a dash of systemic homophobia into the mix.)

No other major video platform has this nonsensical "as long as it's not important, it's OK" rule. Instead, they usually emphasize context and the ethics of the nudity / sexual content...


Vimeo does not allow videos that contain explicit depictions of nudity or sexual acts (in most cases), nor do we allow videos that seem primarily focused on sexual stimulation. (There are plenty of other websites for that.) Of course, Vimeo respects creative expression above all else. That’s why we allow depictions of nudity and sexuality that serve a clear creative, artistic, aesthetic, or narrative purpose. We also allow non-sexual nudity, including naturalistic and documentary depictions of human bodies.

Even YouTube considers context to be important: (emphasis mine)


A video that contains nudity or other sexual content may be allowed if the primary purpose is educational, documentary, scientific, or artistic, and it isn’t gratuitously graphic. For example, a documentary on breast cancer would be appropriate, but posting clips out of context from the same documentary might not be. Remember that providing context in the title and description will help us and your viewers determine the primary purpose of the video.

Gamers want so desperately for games to function as art, to witness games about the depth of human experience -- and here is Twitch, a crucial platform in games culture that had 44% livestreaming market share in 2014, insisting "NO" -- games should only ever snicker about sex and nudity, like some stoned tweens clutching smuggled Hot Pockets in the back of a movie theater.

The idea that nudity and sex are allowed on Twitch, only when it's tangential and exploitative, is a fucking disgrace rather regrettable policy. It sends conservative messages for what is allowed to be a "real game", and discourages artistic experimentation from developers for fear of being banned from Twitch.

I believe Twitch should revise its policy to account for a game's attitude toward sexuality or nudity. I maintain adamantly that my games do not function as pornography (I actually get complaints from players that my games are too self-conscious and that they're not pornographic enough) so if Twitch wants to exercise some leadership here, and add some nuance to their policy to allow for case-by-case artistic consideration, that'd be great.

Or, you know, Twitch can keep clutching its hot pockets and keep treating my games exactly the same as super gross exploitative rape simulator fantasies.

EDIT: Apparently, Twitch already has a "mature content" setting built into its systems infrastructure... if you want to "protect the children", isn't that what that setting is for? Why suspend streamers, and ban my games outright, when you can just enforce this restriction instead?
at 4:53 PM
Email ThisBlogThis!Share to TwitterShare to FacebookShare to Pinterest