No Stars, Only Constellations as slow magic (updated)

NOTE: This post details my process and intent with the game No Stars Only Constellations, and basically spoils the game. It is recommended that you play it first.

Astute players may notice that No Stars, Only Constellations is a semi-remake of a previous game bundled in Radiator 1, called Polaris. Much of the initial premise remains the same: the player character is reluctantly on some sort of date with some dude, who implicitly demands that you pay attention to his stargazing story. At the end, he basically leaves you.

The games also make similar points about stargazing: yes it's kinda romantic sometimes, but also, it's kinda bullshit. There's a certain fantasy of stargazing (and space) that, I think, almost never withstands any scrutiny. Maybe it's a metaphor for certain relationships?... 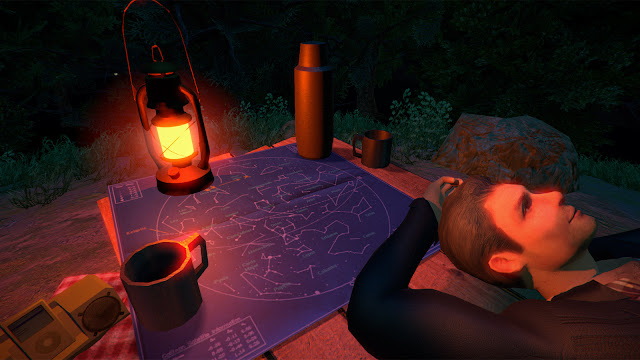 Originally, work on this remake version began (and was suspended) back in 2013. I paused development because I wasn't really happy with remaking the original game's puzzles and activities: trying to pick out a specific constellation from a giant noisy field of random stars, with relatively little help or forgiveness. The original game hinged on whether you remembered the trick of how to locate North by finding the North Star (Polaris) by following the direction of the Big Dipper, which is a real-life navigational aid you can use throughout most of the Northern Hemisphere. I liked the idea of teaching something real in a video game, but now, this trick felt a little worn-out.

With the announcement of a Fermi Paradox Jam, I thought it would be a great opportunity to challenge myself to fix up the game, and so I worked over the past week or two to try to finish it somehow.

My first step was to try to prototype a new stargazing interaction. Maybe something less about figuring out a puzzle, in favor of something more expressive and free-form. The initial prototype involved constructing your own "constellations" of words, to project your own ideas and associations on the stars. It looked like this: 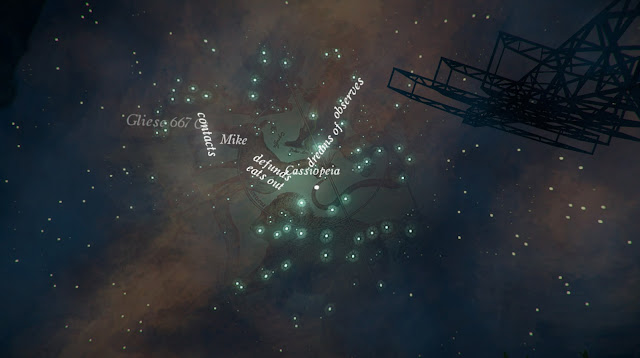 The funny part would've involved pairing sex words ("Mike fucked the shit out of...") with science words ("... a Kardashev Type II alien civilization"), and it was a little amusing, but I felt like it couldn't really support more than a minute or two of sustained interaction. I needed it to last for at least 5 minutes!

Despite the failed design experiment, No Stars is still not a memorization puzzle game. It ended up being more like a simple guided tour of the night sky. Your goal is still to look at stuff based on narrative cues, but the game is very forgiving about letting you aimlessly scan the sky by brute force in order to progress. Because the game is now so easy, I was able to omit a hint function and I didn't have to do any difficulty tuning.

Most of the heavy-lifting in this game (i.e. what's maybe most interesting about it) is the ancient constellation sky effect, which selectively overlays an old Renaissance star chart over the night sky, like a giant roving magnifying glass. The overlay always moves toward wherever you are looking, but it moves slowly, which hopefully encourages players to direct their gaze slowly so that it doesn't lag too far behind. 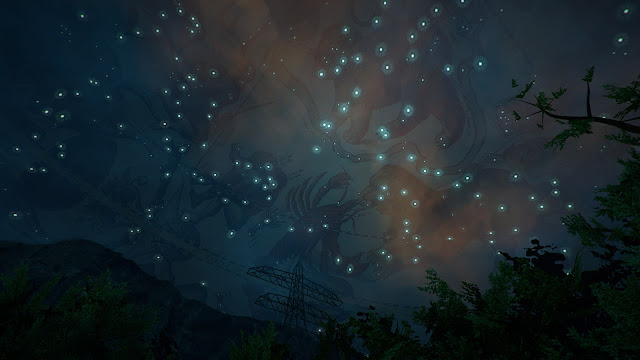 In the middle of the game, Greek columns also slowly rise along the edges of the forest. They move so slowly that most players do not notice them at first, if ever. My goal was for players to pay deep attention to the stars, but then suddenly notice these ruins around them. Were those pillars always there? What do we notice, and what do we ignore?

It is all supposed to feel a bit like magic, but a slow kind of old magic.

The study of space is one of the oldest forms of magic ever practiced.

Civilizations have been telling stories about the sky for thousands of years, and maybe the Fermi Paradox is just the newest type of constellation, the latest useful idea to help us decide which stars to notice and which to ignore. 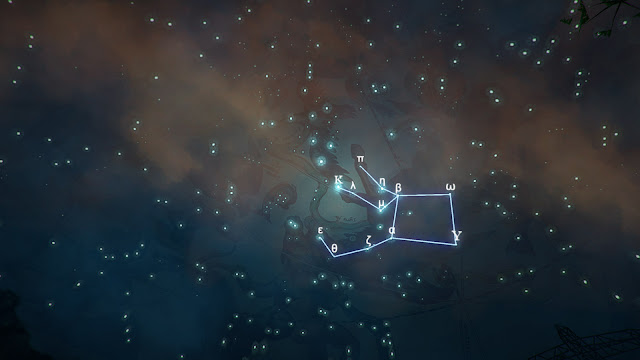 The game ends with your boyfriend saying he has to go pee, and then leaving. When will he return? Will you wait for him, or will you quit the game? (In future updates, I want to add a 50% random chance for your boyfriend to come back from peeing in the woods. Unfortunately, I didn't get around to it for this game jam.)

I wanted to end the game with a mild dilemma reminiscent of the sci-fi film Contact, which is about how science itself cannot prove that science is important -- science requires deep belief to justify itself as a value system. How do you keep hope alive? I wanted much lower and more personal stakes here, so the problem at the end is more about your faith in this video game. The core question is basically the same, "is there something there, or am I wasting my time trying to find out?" I'm sure we've all had relationships like that.

I also thought it was important for the boyfriend to literally get up and walk away because, well, most players don't really expect him to actually change or do something. 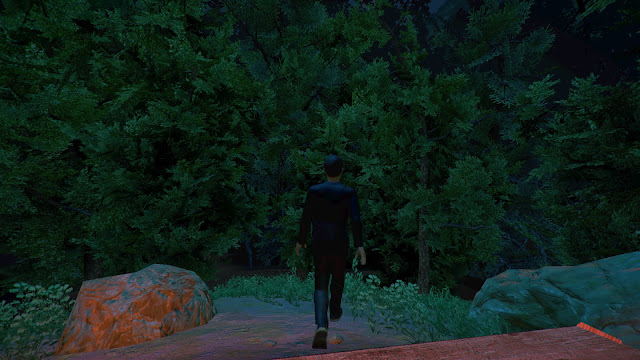 Gamers who play a lot of AAA games are probably familiar with "prop NPCs" -- tertiary static "extra" characters who exist in the game world just to decorate it, like a picture hanging on a wall, or a door that never opens. These characters just loop through the same pose, forever, and rarely do anything of importance. I wanted players to think he was one of those types of game entities, so that players would basically write him off and take him for granted. (Which is maybe what the player character was doing too, emotionally.)

So when he abruptly leaves, claiming that he has to pee, hopefully it's a bit shocking. He's been directing the gameplay and narrative this whole time. What's left if he leaves?

The player must wait a random amount of time, anywhere from 6 to 12 minutes, before they get a 22% random chance for their boyfriend to return. (22% is the current estimated percentage of habitable planets.)

Now, I expect most players to quit the game before then, instead of waiting for all that time for a ~1/4 chance to see him again. But for those who are willing to wait with uncertainty for those 6-12 uncomfortable minutes, I introduced a new endgame mechanic where you will fall asleep after 30 seconds of inactivity, which means you must periodically move your head a bit and pay attention, or risk falling asleep. If you fall asleep, you automatically quit the game and lose your chance at seeing him.

This "screensaver"-like system is intended mainly to frustrate achievement hunter players for a future Steam release, so that they cannot simply leave their computer unattended for a 22% chance of earning the achievement. If players want to "commit" within this game system, then I want players to actively wait, to really feel the passage of time.

Because if stars are an ancient form of slow magic, then maybe so are relationships.

"No Stars Only Constellations" was a phrase written on the whiteboard in the office of NYU Game Center director Frank Lantz. I don't really know why he wrote it, or if he heard it from someone else, but I'm hereby claiming it for this project. Thanks in advance, Frank!!
at 1:08 AM
Email ThisBlogThis!Share to TwitterShare to FacebookShare to Pinterest