Toward an honesty of pixels: on Final Fantasy 12 HD and Quake 3 Arena

I'm currently playing the remastered PS4 version of Final Fantasy 12 ("The Zodiac Age") and it's still the same old nonsense story about fantasy imperialists and magic crystal macguffins. One thing that surprises me, though, is how this remastered version actually looks worse -- it went from the apex of PS2-era 3D art to looking like a mediocre PS3 game running on a PS4.

When it first came out 17 years ago (!), the Playstation 2 famously had very little texture memory (4 MB!) and no texture compression (!) which meant developers had to get creative. Loyal readers of this blog know of my love of lightmap atlases and UV layouts, and so I'd like to talk about how the textures for the original Final Fantasy 12 on PS2 were utter masterpieces produced under severe constraints -- cramming so much detail into these small texture sheets, down to the pixels...

Look at the texture sheets above. Note how there's only ever half of a face or torso, or one leg or arm; because these body parts are basically symmetrical, the character artist just mirrored and reused the same texture for both sides. Look at all that precious PS2 texture memory they saved!

As efficient as it is, there are a few drawbacks to this technique. Symmetrical UV mirroring means you want to avoid noisy high frequency details, and make sure your textures are relatively clean or homogeneous -- it would look weird if you had symmetrical scars on your face, or symmetrical patterns of dirt on both of your arms, etc. I think this symmetry explains why the Final Fantasy 12 skin tones are so boring and flat, and why Vaan's abs looked so weird -- it has to look flat in order to look consistent.

Compare this relatively restrained style to the gratuitous phototexturing style of something like Quake 3 Arena, which technically shipped in 1999 (7 years before Final Fantasy 12) but demanded at least 8 MBs of video memory from gamer PCs. Notice how these skins push every bevel and muscle group to its breaking point:

Of course, Quake 3 and Final Fantasy 12 share some common values. All 3D game artists value really efficient use of UV space. If you tightly pack your UV islands, then that means less wasted texture space taking up precious GPU memory. Both styles also demonstrate mindful use of texel density, where more important areas of the model (traditionally the face and torso) get more texture space than less important parts (armpits, bottom of feet). 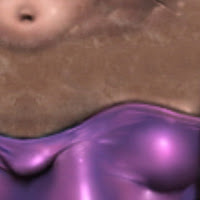 But notice how the Quake 3 skins make less use of symmetrical mirroring. Here, the artist Kenneth Scott rarely mirrored the chest or the face, but he did mirror less noticeable areas like arms, legs, and the butt.

Look at that one solitary shiny butt cheek on the wrestler texture, with the purple pants -- look at how round that looks. Just look at that crotch bulge, look at that ass cheek! To push those highlights and bulges, you need to make a lot of assumptions about lighting and volume that Final Fantasy 12 couldn't necessarily make.

Final Fantasy 12's character textures also prioritize UV distortion and alignment more than Quake 3 -- how easy is it to paint on this texture? With more photographic / realistic art styles, you can usually care less about distortion and alignment because of all the noise and surface detail. Notice how the lines and UV boundaries in Quake 3 go all over the place, at all angles (which works for Quake 3!) but in Final Fantasy 12, every texture segment is orthographically aligned along 90 degree angles, with many thin horizontal / vertical lines. That's because they want every line to pop.

It takes a lot of training to make a thin pixel art "jagged" line look smooth. You have to carefully paint the lines and selectively blur the edges to look good to the viewer. Anti-aliasing pixel art without muddying your shapes is practically an art form in of itself. When you don't have a lot of texture memory, every pixel counts! The artist had to handpixel every of those loops perfectly in order to get that metal to pop like that.

In this way, the original Final Fantasy 12 represents a high-point in this era of 3D game art. This old school low-polygon low-resolution handpainting style involved a special mix of realism with pixel art sensibilities, and you don't really see this thing anymore in games.

Architecture has this idea of material honesty / "truth to materials", where you shouldn't make concrete try to look like old stone bricks, or build old castles out of steel. I think these vintage PS2-era handpixeled textures are a great example of a digital form of truth to material, an art direction borne out of specific hardware constraints, borne of the metal itself.

Now, the characters in the FF12 remaster look cohesively repainted and remastered. I have no real complaints. There, the Chinese remastering firm Virtuos "performed the honesty" well enough... but I think the rest of the game leaves a lot to be desired.

In the screenshot above, I'm going to focus on the wall on the left, which is in Rabanastre, a common central city area of the game that you return to frequently. It is just one example, but if you play this new PS4 version, you'll see the same generic "remaster" up-res treatment everywhere in the game world. If I had to guess, the artists probably did this: (1) scale up texture by 200%, (2) increase contrast, (3) desaturated a little for that grayish next-gen feel, (4) apply a sharpen filter, (5) overlay a noisy detail texture on top to try to make the surface look more detailed.

You can easily automate Photoshop to do this for you, in literally a minute, for entire folders of textures, and I imagine that's what the dev team did here. But this is basically the same attitude that resolution-obsessed "HD graphics" modders inflict on games too, resulting in the fussy (and creepy) art direction of stuff like FakeFactory.

The Square Enix Virtuos artists probably knew what they were doing, and consciously made this choice after considering the trade-offs. They likely didn't have much time or resources, and they decided it was worth it: to perform this "gesture" of HD remastering to appease gamers and customers, without actually repainting the world at all.

It's basically amounts to a lazy Quake 3-ification of the game's art style -- which isn't bad if your game is Quake 3 or if you put more time into it -- but here in Final Fantasy 12 it feels like a more jarring betrayal than anything that happens in the game's meandering plot. It is a gratuitous waste of texture memory in a game that made texture memory reuse into an artform; it is a negation of this game's legacy.

On the PS2, the game's environment and characters looked cohesive and balanced, albeit blurry and aliased and low-res (like any other PS2 game played on a CRT television). Still, every cinematic shot was reasonably composed, and you basically knew where to look. Everything looked like it belonged together.

But here in this remaster, the entire world is practically screaming at you. "LOOK AT THE DIRT AND GRIME ON THIS WALL!!!"

And that's not a particularly honest nor interesting thing for a wall to say... it's just loud.

OVERALL SCORE: 7/10
- This PS4 remaster is OK I guess, but really, Final Fantasy 12 probably looks best on a PS2 emulator.

(Special thanks to Brendan Byrne for his rant that got me started on this line of thinking.)
at 12:48 PM
Email ThisBlogThis!Share to TwitterShare to FacebookShare to Pinterest