Sometimes people want to exhibit my gay sex games for the public. It's an understandable feeling. If it's a large funded and ticketed event, I sometimes ask for a small honorarium... and in most cases, I usually give my blessing, send over some special builds and give advice, and ask for event photos afterwards.

When I look at these photos, they usually fall into one of two categories. One category is the huge industrial game expo. Because of their large scale and scope, each indie game inevitably takes the form of a standardized booth within a huge grid of booths. At minimum, that means a laptop sitting on a forgotten table as part of a large expo -- or if you invest a lot more, maybe there's a whole booth with black cloth partitions.

While I do appreciate any resources or labor that these events provide to me, I also wonder whether we can create alternatives and different ways of presenting games in public. Why does these public games events always look the same and function in the same way?

This is basically what GDC and PAX feel like all the time, but I find that many game festivals with a local focus still strive to show hundreds of games at the same time in the same place, which also necessitates this aesthetic. We might call this "international game expo aesthetic", like a faceless airport terminal or a plastic lawn chair, it's site-agnostic and standardized and the same throughout the world.

This sort of makes sense in the US, a country with basically zero public arts funding or government support, so the event budgets have to come from sponsorships and ticket sales, which demand a huge expo-like scope with hundreds of games. (I imagine that sponsors usually want a bigger audience turnout to make the most of their sponsorship.)

And I get it. You don't have money or staffing to spend on your exhibition design, and/or the event is fighting just to survive and exist.

But if the whole purpose is to create an elevated mood and space for games, why are aesthetics still so low on our priorities?

There are, of course, some US exceptions like Babycastles, Mild Rumpus at GDC, Fantastic Arcade, or Wellesley's Jason Rohrer retrospective ("finally, games that make you THINK!!!") which focus on artful exhibition design and cultivating an elevated space in which to experience games... but these are the exceptions in US public games culture.

How do these exceptions exist, and how can we foster more of them?

It took years for Babycastles to finally establish their permanent venue, figure out how to fund it, and become an official 501(c3) non-profit... meanwhile I believe Mild Rumpus exists primarily by the continued grace of its GDC patron... and um I have absolutely no idea how Fantastic Arcade funds itself and builds so many cabinets each year but more power to them!

Are these examples replicable or desirable? Should we start more Babycastles, more Rumpuses, more Fantastics? (You should probably ask them.)

We don't put as much resources into exhibition design and fabrication as I'd like to, because we have to balance that concern with all our other costs -- flying in the artists and supporting them, renting the venue, hauling all our equipment across the city, etc. Our event is completely free and open to the public, and we have no advertisers. Most of the costs and staffing are entirely on the NYU Game Center to figure out, and we have to share that burden with the rest of our events budget for the year (which has a handful of corporate sponsors)... but my point is that No Quarter isn't really replicable, we're sort of in a unique position to spend a bunch of money on this because we believe it's for the public good to try different formats for public game design.

But still, even with all these constraints, we very consciously do try to stay away from the typical expo atmosphere and expo aesthetic. We think it's important to have different shapes of public games events. If all our events look the same, then what's the point?

If we want to facilitate a diversity of identities and experiences in games, then maybe we should look at how the design of our public spaces facilitate that goal. Can games events be more than big consumerist fan expos, can we say anything else about games? How else can we present games, and re-frame their meaning or our relation to them?

Fortunately, I think people around the world are already doing some of that work, and I'd like to highlight some of their efforts:


The Oujevipo Exhibition is a French touring exhibition of large-format physical game installations run by Xavier Girard and Pierre Corbinais. The "cabinets" here are giant wooden sculptures that can rock or sway or envelop their players. It's a bit like Alt.Ctrl, except with a unified voice and vision about embodiment in games. Corbinais also runs Shake That Button, one of the few databases / archives of games with alternative controllers, so we can also imagine this exhibition as a sort of commentary on the state of the field.

To me, the Oujevipo's main social provocation is how much they embrace children and families. Gamer culture has long wanted to shed the "games are for children" baggage, while still demanding complete entitlement for gamer man-children. Where have the actual children gone, and how do we model a less toxic gamer culture for them? There's a sort of sense of multi-generational play culture here, that doesn't really exist when you play most multiplayer networked games. When there are children in the room, we all understand we should help look out for them. Maybe gamer culture needs more children. 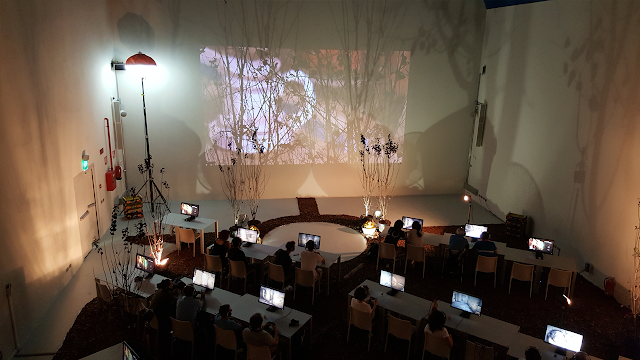 The Milano Game Festival last year, run by Italian game developers Santa Ragione, looked moody and gorgeous. They decorated a room with soft spotlights, bathing the space in these atmospheric shadows, and then they covered the floor with leaves. It's not a giant convention hall lit like a dentist's office, it feels much more like a sacred grove or something. They experimented with a different format for playing the games:


Five evenings of play that will take place along the lines of a film festival, including the participations of international guests and premieres – the Milano Game Festival is dedicated to the curious, to film and media art fans, and to those looking for an intelligent and original entertainment experience. [...] The Milano Game Festival offers an entirely new format for enjoying videos games: a real play hall with many seats, similar to a movie theater, in which to dedicate the right amount of time to enjoying immersive interactive experience. All participants play the same game at the same time, and will share a common experience to discuss and remember.


Playful Arts Festival in The Netherlands recently ran a "Playful Arts Sessions: The Encounter" event in June 2017, where they brought in performance artists and dance theater people to facilitate playful immersive experiences. The first experience in that video, "The Loneliness of Crowds" by Louise Orwin and Eugénie Pastor has a lot to say about intimacy and urban life, but it also strikes me as something more "playful" than most video games. It's tempting to focus on the two players as the central participants, but they also double as performers who need to perform an appropriate amount of awe and wonder. The "magic circle" and contract of sportsmanship still holds power here.

The rise of immersive theater and "escape the room" venues suggests that there is definitely a lot of interest in this type of stuff, as long as it's not necessarily framed as a "games event." To me, this suggests that public games events should not necessarily try to reinvent what the wheel, but rather we need to actively seek out more collaborations and alliances with other artistic fields, which likely have much longer histories in public arts and performance. Maybe the best "public games events" won't even be recognizable as "games events." 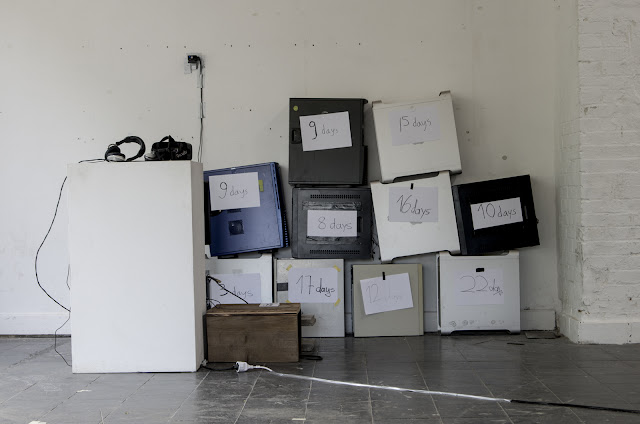 I'd like to end with a Tinypalace installation of my own game Hurt Me Plenty. Because that game makes use of a real-world cooldown timer if you transgress the AI's boundaries, most exhibitions end up resetting the game every few minutes to make sure everyone can play -- and I understand that desire -- but the game is specifically meant to allow one player's actions to lock out the game for others, often for weeks at a time. (That's how dangerous abuse can be!)

As part of their installation, Tinypalace apparently stacked 10 other PC towers near the game kiosk,  and attached notes to them: "9 days" / "15 days" / "22 days" and so on. Thus, each of these PC towers represents an instance of the game that has been locked by an abusive player. It is unclear whether these PC towers were actual computers configured during the life of the exhibition, or beforehand, but either way I think the effect is still powerful.

It's maybe the only public game exhibition in the world that has thoughtfully installed my game and followed its spirit while elaborating upon it. I was very impressed. In my mind, this is a great example of how public games exhibitions can bring out the best of a game -- a specific installation that responds specifically to that game, culminating in a unique sculpture that accumulates over the life of the exhibition.

... and then, as is the case with all of these events -- the exhibition ends, never to return, existing only in photos and memories.
at 12:58 PM
Email ThisBlogThis!Share to TwitterShare to FacebookShare to Pinterest