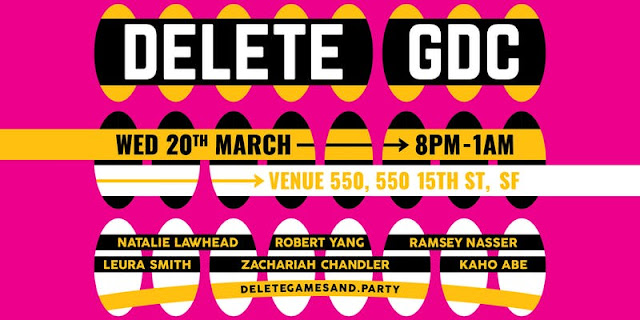 This year during GDC, I'm happy to be participating in DELETE GDC, a big party where you can play a bunch of new never-before-seen games... that will be deleted by the end of the night.

At past DELETE events, that ephemeral quality has meant a lot of unique performance-type experimental games, like a drinking game where the designer/performer gets blackout drunk for the first time in his life, thus "deleting" his memory / life... or a game about offering your secrets to an altar before ritually burning them.

This is the first DELETE being held outside of Australia, and I'm excited to be working with Louie Roots and the rest of the artist lineup: Natalie Lawhead, Ramsey Nasser, Leura Smith, Zachariah Chandler, and Kaho Abe.

As for my contribution, my first thought was a game about literally deleting GDC from existence -- erasing every trace of UBM and Moscone Center from the universe -- but then it felt too depressing to see that deletion get deleted and undone at the end of the night. Also I felt it was important to go with the golden rule of game jams: never go with your first idea. So now I'm aiming for something different and more communal: a fairly involved installation piece about game development and labor, a sort of "human game engine" thing. Hopefully I'll figure it out over the next two months.

GDC veterans will note that this event falls on the same night as, traditionally, That.Party... but don't worry, you're allowed to attend more than one party in one night. In fact, it's probably best practice.