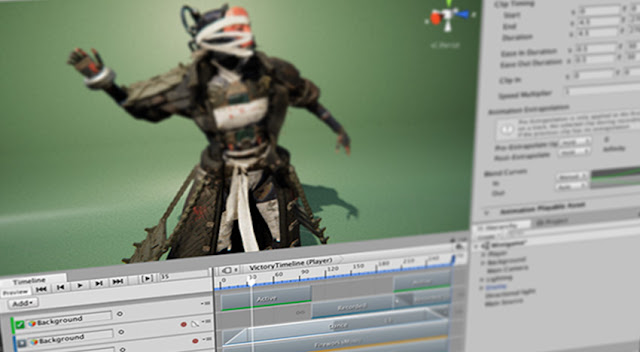 I recently used Unity Timeline to do cutscenes in a game. Once you figure out how to use it, it works great, but that learning curve of expectations and setup is pretty annoying.

To review: Timeline is a sequencing tool. It's good for higher-level logic where you need to coordinate a bunch of objects at once. For many games, that usually means choreographing cutscenes or sequences. Many different engines and toolsets have sequencer tools and they all generally have the same workflow -- you make tracks and you put actions on those tracks. (see also: UDK Matinee, UE4 Sequencer, Source 1 Faceposer, Witcher 3's cinematic tool)

Note that Timeline is not an animation tool, it's higher level than that. Think of it like a movie director, it coordinates animation, audio, characters, and FX together, but doesn't actually make or process those assets.

In this intro workflow post, I'll start with SETUP TIMELINE, then SETUP DIRECTOR and MAKE CUTSCENES and CONTROL THE DIRECTOR VIA C# SCRIPT, and lastly how to MAKE CUSTOM TIMELINE TRACKS.

When you first open Timeline in a brand new Unity project, it's not very useful. You need to download some extra stuff.
(Why aren't the DefaultPlayables included as a default?! WHY? Sigh. Anyway.)

Make a game object and put a "Playable Director" on it (a Timeline is a type of "Playable") and then open up the Timeline tab. Each Director has two main parts: (1) the timeline asset (this is what you're editing in the Timeline window) and (2) the bindings.

Bindings are slots that connect the scene's game objects to the timeline. Think of each binding as a role in a movie, and the film director chooses which actor to perform that role. 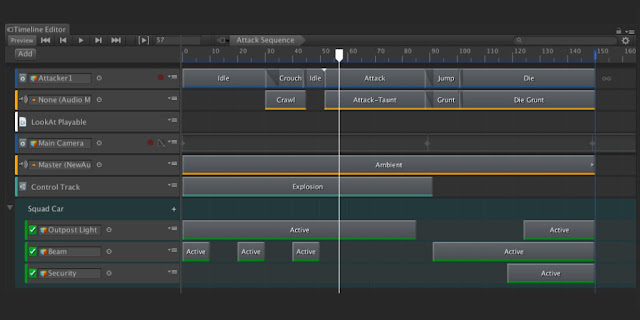 For each game object and each type of action, you must create a new track.
Here are the most important track types for typical game cutscenes:
If you're using Unity 2019.1 or later, you also have access to Timeline Signal Tracks. Signals are like animation events, but in your Timeline. When the Director plays your Timeline and comes across a Signal, it fires that message to a Signal Receiver, which fire standard Unity Events in response.

4. CONTROLLING THE DIRECTOR VIA C# SCRIPT

For the most part, automatically starting the director at the start of a level is pretty easy. You can either use the "Play On Awake" in the director's inspector, or in any script's Start() function just call Director.Play()

OK but here's actually the most important thing to know -- Director.Pause() doesn't actually "pause" the director. It stops the Director and lets you resume from that point, but it does not actually hold or freeze any of the Timeline actions, nor maintain any Timeline state.

example: You have text dialogue on screen, but you want the player to press SPACE before continuing the cutscene. If you use Director.Pause(), all animations and Cinemachine cameras will revert and the director will relinquish override control on all game objects, because "pause" means that the director has stopped any processing or playback.

To truly pause the timeline director, you have to use this hack from the Unity forums to set the director's root logic speed to 0:


Then to resume the director playback, set the speed back to 1:

If you have any custom dialogue or game system to use in your cutscenes, then the default track types will feel pretty inefficient. As of 2017, Unity has started modularizing and over-engineering everything. That extends to the Timeline / Playables system, which might require you to make up to 5 different C# scripts to implement one custom track type. Unity's DefaultPlayables package has a script template generator to try to ease that pain.

But first, you need to understand how the Playables and Timeline system works in the code. This 2018 Unity blog post "Extending Timeline: A Practical Guide" is absolutely essential to understand what all those different C# scripts do, so make sure you read it, even if you're just skimming the post to understand the basic idea.
MORE RESOURCES