Getting started with HaxeFlixel in 2021

Warning: this is a fairly technical game developer-y post. If you came here for gay sex, I'm sorry.

For an upcoming project commission, I'm making a 2D game with crowd simulation and simple controls that works well on mobile browsers. (Reminder: for iOS, that means WebGL 1.0 and no WASM.) The engine should be able to render and simulate 200+ lightweight game objects -- frame-animated sprites with simple collision, no fancy physics or shaders.

Which game engine should I use to maximize ease of learning and compatibility, and manage hundreds of simple objects on-screen? Here was my thought process:

In the end, I chose to build this particular project with HaxeFlixel. This post details my early impressions, thoughts, confusion, advice, etc. with learning it. 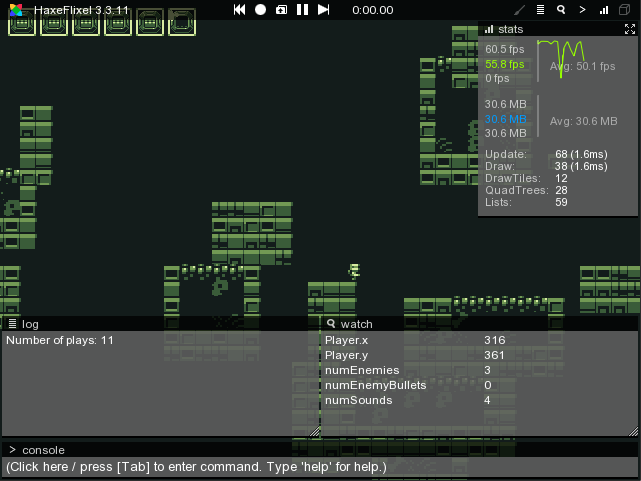 Haxe has a very mature and stable multiplatform stack of libraries (OpenFL, Lime) with good support for HTML5 / WebGL as well as native executables, and the Flixel framework design has already been time-tested from its years as an AS3 Flash library with lots of documentation and samples.

I also liked how Haxe has decent autocompletion support in VS Code, which reduces (but doesn't quite eliminate) all the documentation hunting. There's a decent debugger overlay with dev console too, for those who use those things.

This post is some info, advice, and useful links from my experience learning HaxeFlixel in 2021.

* * *
Overall, my experience with HaxeFlixel has been fairly good so far. However, it has been designed for a fairly specific use case: tile-based pixel art platformers. The further you diverge from that original purpose, the less suitable HaxeFlixel will feel for your project.
Here are some use cases where the project would be doable but I would expect some friction / difficulty with HaxeFlixel:
Here are some use cases where I probably wouldn't use HaxeFlixel:
at 8:12 PM
Email ThisBlogThis!Share to TwitterShare to FacebookShare to Pinterest