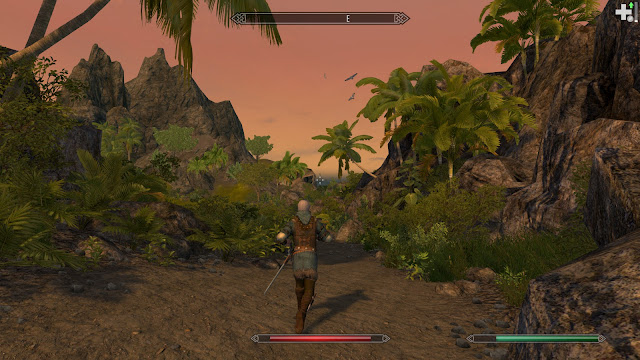 I'm playing a giant Skyrim "total conversion" mod called Enderal. It does a lot of interesting things but also less-than-good things. I'm told it's inspired a bit by the Gothic series, which I've never played, so maybe a lot of my observations are more about Gothic than Enderal?

Be warned that some of the screenshots are a bit spoilery (e.g. there's a tropical biome!) and my notes are obviously going to spoil some of the game's structure, but all these spoilers are pretty vague and anyway I don't name any names.

WE SHOULD ALL DO THIS / STEAL THIS:

Dev-owned wiki. The dev team "SureAI" operates the official Endreal strategy guide and lore wiki. This is a business model I've always wondered about -- make a big complicated game, but then earn revenue from selling ads on the wiki for your own game? It's probably not worth the hassle for a solo indie. Unless... ?

Sit and listen. Whenever an NPC is about to dump backstory and exposition on you, they'll ask you to take a seat. This is a convenient diegetic way of locking the player in-place for a cutscene, while also priming the player for an extended cutscene. It also sets the tone for some social contexts -- sitting at a big tavern table to share a meal, or sitting in front of a powerful person's desk. It is much better than the boring shot reverse-shot cutscene stuff going on in AAA RPGs these days, and makes Skyrim's "sit" mechanic more meaningful.

Expendable companions. You know how NPCs can like / dislike your different dialogue choices, that adds up to a score, and you hope you'll get to fuck at the end? I think Enderal had maybe like 10+ different NPCs who respond to your dialogue... and then a bunch of these NPCs leave and/or die. When the game shows you how some of your hard-earned relationship grinding will just "go to waste" anyway, then I think the player does something more interesting -- they care less about optimizing everyone for a perfect ending, because any character could be expendable. Destroy the player's expectation that relationship mechanic = main cast member. 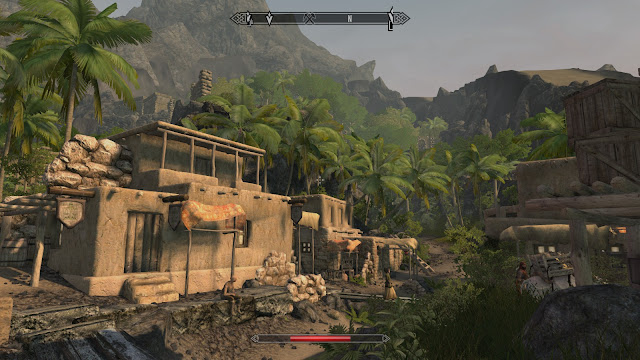 Catch-up time / temporal branch and bottleneck. During big long quest chains, there are periodic quest stages where you have to wait 1-2 in-game days before checking in with the NPC again. Diegetically, the NPC has to prepare a machine or potion, or get supplies, or whatever. Systems-wise, this forces you to pause that quest chain and do something else. Sometimes they don't even tell you how long it will take, and you have to wait for a courier NPC to show up randomly to notify you. It's like the game's telling you to take a break and follow your other quest chains. 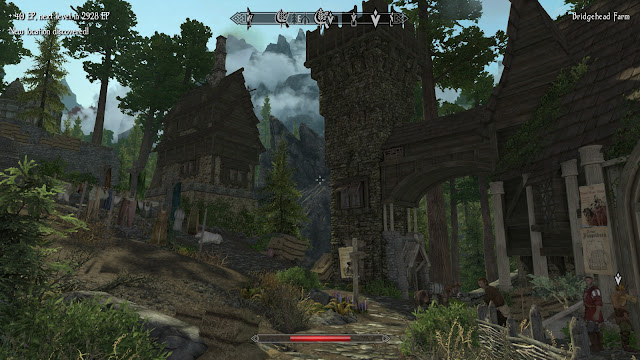 A bank is a place. In the main city there's a bank in the market square. There you can open an account and deposit money to earn interest (compounded daily), and of course when the banker goes to bed you can sneak behind the counter and steal all the loose money laying around. But that's actually just the start of your banking adventures, which keep bringing you back to the bank... 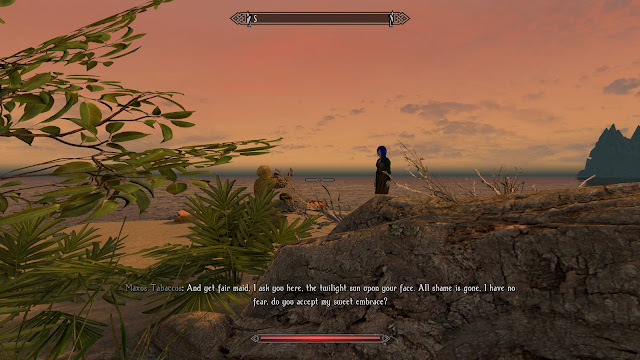 The tyranny of environment artists. Level design is by far Enderal's biggest weakness, probably because it has to do with all the invisible aspects of level design. Like a lot of modders, the Enderal team is obsessed with surpassing their base game's production values. But without any meaningful code access to upgrade terrain engines or lighting systems, that mostly means spamming set dressing and clutter everywhere. So much of the game world has been designed for great screenshots -- height variation everywhere, foliage everywhere -- but in practice this results in really awkward level design: 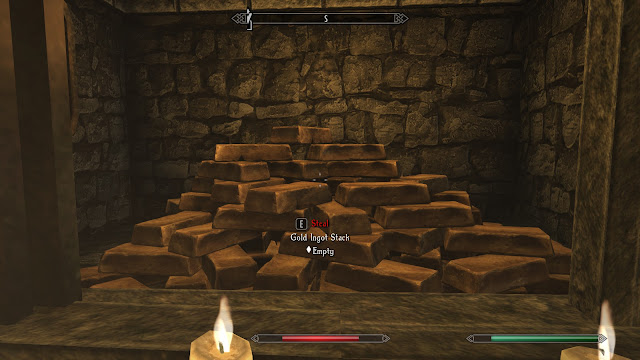 Money sink. One common "problem" with Skyrim (and most open world RPGs) is that you end up with a bunch of money and nothing to spend it on, except nice-to-have things like convenient access to crafting materials or a house.
But in Enderal, 95+% of your core progression skill points will come from the hundreds of "skill books" that you have to buy and eat (these aren't actual readable books, they're in the food menu).
Here, leveling up only increases your cumulative maximum skill cap. So you level up and get 5 "Learning Points"... but to spend those Learning Points on actual skills, you must eat books. The higher the skill, the more expensive / rare the skill book.
It's a little confusing, but my actual beef isn't on this fussy leveling system, it's more about what it does to the rest of the game... It makes money too important. Everything becomes a question of maximizing money. Loot RPGs need to carefully balance the player dilemma of "this would be useful" vs. "this is better to sell" and this tips that balance too much toward the latter. 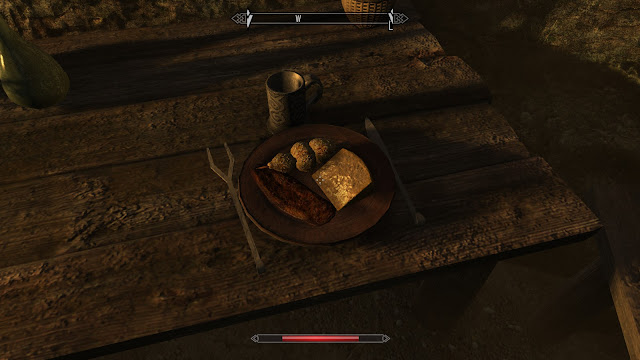 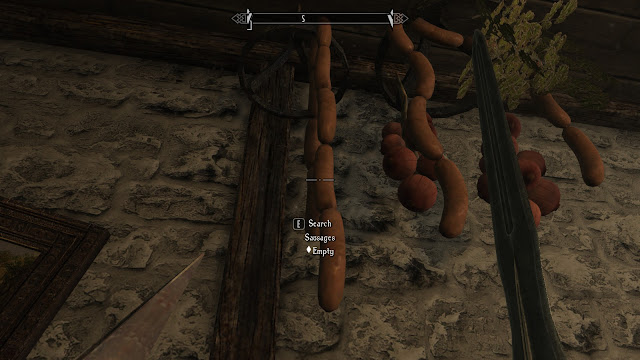 All in all, I enjoyed Enderal and learned a lot from it. The voice acting is OK and most of it works. If you're a Skyrim fan, it's pretty much just More Skyrim.
My only advice for any Skyrim veterans -- decrease the combat difficulty by one, below your usual combat difficulty, at least for the first few hours. The beginning is too hard with a punishing healing system, few resources, 'ots of wolves, and general confusion. Then gradually ramp up difficulty as you get more overpowered + as the combat gets more and more boring.
Enderal is free on Steam for owners of both regular Skyrim and the Skyrim SE.
at 10:05 PM
Email ThisBlogThis!Share to TwitterShare to FacebookShare to Pinterest