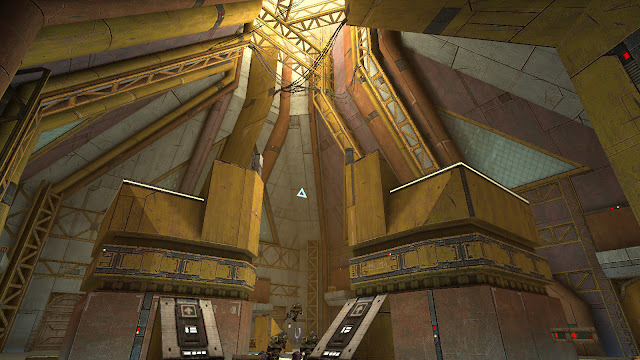 This post spoils what happens in my Quake map. If you care about that, then you should play it first.

NOTE: there are reports that my map crashes FTE Quake, so make sure you use Quakespasm or vkQuake to play. Sorry about that.

"Tell Me It's Raining" is my fifth released Quake single player map, part of the Alkaline Jam where we all made sci-themed "base" maps with a mod kit called Alkaline.

It uses the Makkon sci-fi themed textures as showcased in the stunning Alkaline start hub map -- a major inspiration for this map and I assume other maps in this pack as well. I was also inspired by the Centre Pompidou's copious colorful piping and vast industrial scaffolding. I wanted big chunky shapes draped in warm colors, continuing my tendency to make big sunny Quake maps.

I generally like how the map turned out, but I think I tried to do too much complicated stuff in this one, and miscalculated how players would react. 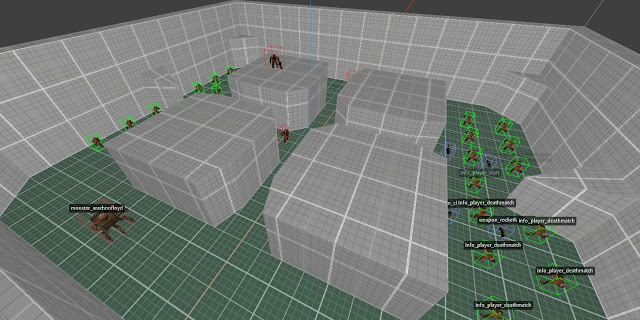 First, the map has one big inspiration that may or may not go over players' heads. Last time I adapted Hang 'Em High from Halo 1 for Quake single player, a big wide open outdoor multiplayer killbox. I wanted to continue this process but with a different type of space, a small dense interior -- so for this map, I've adapted the layout from fy_iceworld from Counter-Strike.

fy_iceworld is somewhat controversial among level designers, a debate that I documented for Rock Paper Shotgun last year. Some argue it destroys the beauty of Counter-Strike and it's just a lazily decorated killbox with four blocks in it, while others argue the simplicity reveals multitudes of elegant eternal truths about multiplayer map design.

How do you make fy_iceworld interesting enough for a single player format? I quickly settled on the idea of a wave-based arena map that mostly takes place in one big room, and decided the arena should be constantly reconfiguring itself to keep things fresh enough. Is it still fy_iceworld if you remove one of the blocks? What if you sink one block into a giant vat of urine? etc.

The title "Tell Me It's Raining" comes from a pop culture catchphrase from a US TV judge named Judge Judy, who would often warn litigants, "don't pee on my leg and tell me it's raining." My first instinct, for some reason, was to make a urine-themed piss temple draped in gold. But I quickly realized that without specular, all the matte yellow metal just read as Egyptian-themed sandstone or at best a typical Quake brown-yellow-beige sci-fi base. So much of Quake is already piss-themed! My carefully constructed piss pool also looked too much like radioactive slime, even though, you know, pee is generally sterile, so my dreams of encouraging Quake players to bathe in piss were thwarted. The water is now boring and blue.

I also tried to tackle another design weakness of mine --  I rely a lot on fights with shotguns. So here I completely omit the shotgun and nailgun from this map, and only provide Alkaline's new plasma weapons, and then later some grenades and rockets. But giving the player some of the most powerful weapons in the game, right from the beginning, quickly led to pacing problems. Mowing down 5 grunts with a plasma gun felt trivial; clearing 10 grunts used all the player's ammo; only like 15 grunts could actually force the player to run. From there, I escalated everything too much, spawning too many monsters in too dense of a space.

Quake mapping culture generally looks down on wave-based survival arena maps -- dropping a bunch of monsters in a room is thought to be lazy encounter design, and most of the surviving Quake audience today strongly prefers to explore large sprawling maps with hand-tuned encounters. These huge labor-intensive maps are hard to make for a variety of reasons, but in this particular context, the most relevant problem is that playtesting the same hand-tuned encounter repeatedly quickly drains its charm and it becomes difficult to gauge whether it's still interesting or not. Compared to that, a big horde in an open space has more replay value and survives the dev grind a bit better. Combined with dynamic map geometry, my personal playtests felt slightly less painful, and making the last 5% of this map felt a bit fresher than my previous maps.

But the dynamic blocks in the middle of the room led to a vertical flow problem -- playtesters would rarely jump on the rising blocks, and usually keep doing their circuits around the floor area, just like so many Counter-Strike and Call of Duty players before them. To try to push players upwards, I activate low gravity on wave 7 of 10. And after I watched another playtester stubbornly manage to never jump at all,and thus never engage with the low gravity, I added some ramps to interrupt the player's circuit and force them to get a bit airborne.

The bigger problem with low gravity in Quake is how to keep the combat still interesting. Ogres and fiends become comically useless, while hit scan monsters like grunts and shamblers become way too strong against a helpless player gently drifting through the air. I added some flying enemies who can chase the player, and make use of Alkaline's new rocket ogres. The only hit scan monsters in this map are near the end, when I spawn 1-2 "arachnofloyds" (jumping lightning robot crabs) as a boss. 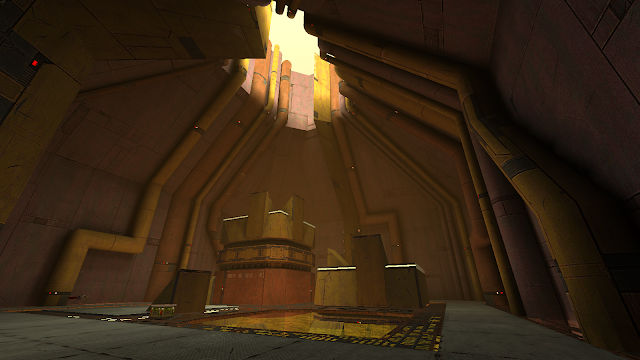 To support the somewhat dense monster count (~150 monsters on Normal, 200+ on Hard) much of the ammo and health around the arena respawns after 45-60 seconds. That's long enough that you can't just stay there and camp the same spot, and short enough where it'll usually respawn by the time you've made your rounds again. There's also a respawning quad damage in the middle of the arena, my fusion of fy_iceworld's funny buyzone placement and Sandy Petersen's liberal use of quad damages. The hope here is that for particularly hard waves, players will take a risk to penetrate through the mob, grab the quad, and then go on a quad run.

Once I finished most of the encounter design, I was surprised at how intense and combat-heavy the map had become. I had planned all these little platforming sections and puzzles to make use of the dynamic blocks; the 4 map secrets correspond to 4 collectible circuitboards which unlock arrays of shootable buttons that let you raise or lower each block at a whim. But now with so much combat and escalation, there was no downtime to explore or take advantage of this system. At the same time, I couldn't pad out the delay between the waves for too long -- it would feel like a loading screen rather than an opportunity to walk around. So a lot of this map's features and verticality ended up feeling like a waste.

Despite these flaws, I think this level has a solid ending. After wave 10, the whole sequence breaks down and the observation windows burst. With a well-timed low gravity jump, the player can now escape the arena and fight through the scientists' lab to escape in a way that evokes Portal. 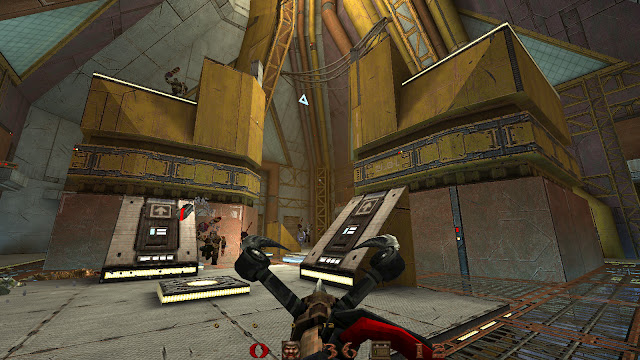 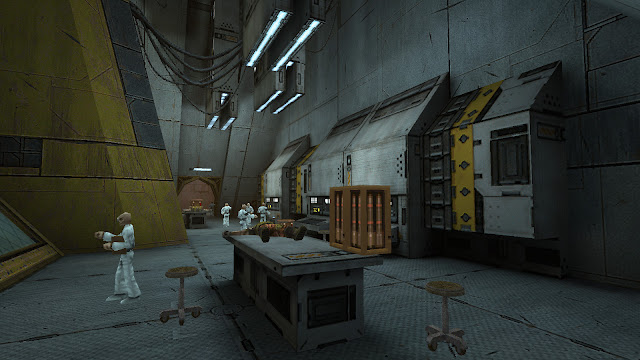 Check out this map as well as the many other sci-fi Quake maps in the Alkaline Jam pack, available now. Download and discuss at func_msgboard, or whenever it gets posted on Quaddicted. 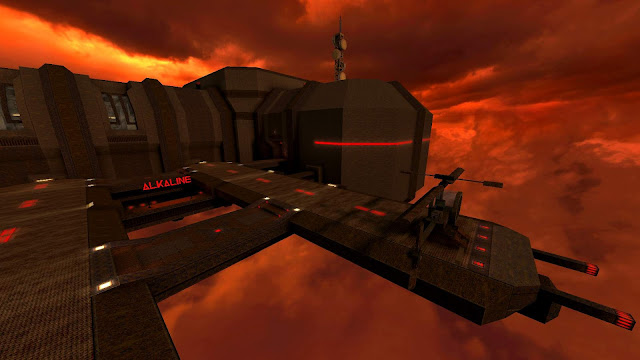 at 9:46 PM
Email ThisBlogThis!Share to TwitterShare to FacebookShare to Pinterest