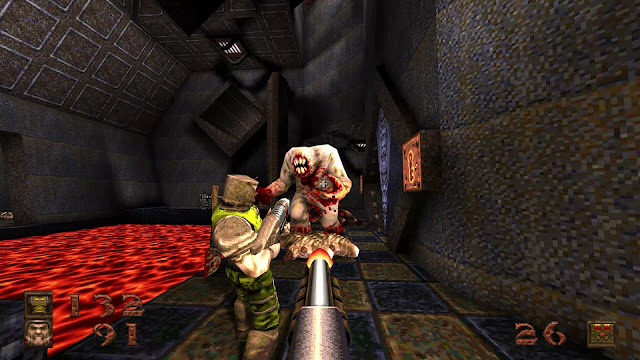 Some random notes and thoughts from Quake modding land, in this cold wintery June of 2022:
COMMUNITY HUBS
Since February 2022, I've been acting as volunteer database maintainer / editor for the main Quake single player community archive site Quaddicted. The original webmaster Spirit still retains admin control, but after he uploads the files, it's now my duty to research the mod and add info / images / metadata so people can actually view, download, and discuss it.
My tenure has been going OK so far, I've only broken the entire website a couple times, and most users likely don't even realize someone else is on call now. (Thanks to previous database editors Negke and Spirit for their loyal service for many years.)
Working behind the scenes has helped me better understand the system's strengths and weaknesses. Quaddicted is very much a Web 1.5 website, a hand-built PHP wrapper around some old forum software. User contributions are limited. Like an aging battlestar, I suspect this "low tech" foundation is partly what has insulated it all these years, helping it preserve Quake single player culture for decades with fairly low maintenance requirements.
However, as I've argued in my Quake Renaissance articles for Rock Paper Shotgun, there is currently an influx of new activity among Quake modders. Even this modest increase in productivity has overwhelmed Quaddicted's capacity: in early 2022 a rather big backlog of community releases accumulated, waiting to be published. And for better or worse, if your mod is not listed on Quaddicted, your already small audience will be even smaller. There was a feeling of urgency building up, and so I foolishly volunteered my soul... Fortunately for now, I'm able to do that. For now, things are flowing mostly smoothly. But a single point of failure for an entire community is never good design, and so my volunteering is ultimately a stop gap fix for a more sustainable solution: a more modern community hub.
This new in-development hub is currently codenamed Slipgate Sightseer, with systems modeled off something like tf2maps.net. Users will be able to publish and maintain their own releases, and so someday hopefully there will be no need for someone like me to manually post each mod. Control (and responsibility) will be decentralized, which in theory, will make it more resilient and adaptable.
To be clear, I'm not involved with it or working on it! As far as I know, there's no ETA on this project, it'll launch when it's ready. But keep a lookout for it. It's an interesting test: can a 25+ year old mod community re-imagine and re-engineer itself?

OFFICIAL MODS
To my surprise, Bethesda / id Software / MachineGames are actually following through on their 2021 promise to keep publishing new official releases of Quake mods. Their "add-on" curation has been interesting and eclectic, pleasant deep cuts mixed with modern releases: The Punishment Due, Terra, Underdark Overbright, and Honey are all community favorites of varying ages and styles.
One of the bigger obstacles here seems to be a legal barrier. For the past few decades, Quake modders have freely mixed-in copyrighted unlicensed content from other games. This has kept modders interested and engaged, but this dubious provenance means today's corporate IP lawyers might balk at publishing something like Arcane Dimensions, a big popular Quake mod that freely mixes-in content from Hexen and Heretic. It's probably not worth disentangling, even if Microsoft basically owns everything.
I feel like this new official mod publishing program's incentives might be shifting the vibe a bit. For a chance to "go official", modmakers must ensure clean provenance for their assets. That means no ripping levels from Elder Scrolls: Oblivion, no mash-ups with Bloodborne, no janky fun remixes with Doom 2016. So whatever's left of Quake's counter-culture vibe fades faster, in favor of clean original high-production polish, which to me feels like a bit of bleed from today's contemporary indie game culture. (I'm waiting for Quake to descend into a Wholesome Ghibli phase too.)
But hey, presumably Quake modders are getting paid for their work now. That's a real plus. (EDIT: I've since found out that they send you one (1) $100 USD Amazon gift card. Wow. That's somehow worse than I imagined. Really sad. It should be $1000 USD in real money at least, and even then, that'd still so little money for so much work.) Though I imagine the checks, if any, resemble small token payments that don't really reflect the amount of work that goes into these mods. Still, it'd be a funny return to something like pre-Steam Valve buying community maps for the CS 1.6 map cycle. Are the boomer shooters bringing back 1990s modder patronage?
... Though really, using a term like "patronage" here implies a higher level of financial support that probably isn't happening, and has maybe never happened in games. If the Italian Renaissance happened because petty rich Florentine wool merchants wanted to spite each other and so they accidentally paid artists a bunch of money -- well -- that's probably more than any big rich AAA publisher has ever given back to the modder / indie game community that it steals from.

THE FUTURE OF MY QUAKE MAPS
... Which leads me into reflecting on my own Quake modding activity.
So I've been making a bunch of Quake maps for the past couple years, and I've been learning a lot from the great level design community here.
But with the rising cost of living, etc. like a lot of people, I've been wondering, how can I monetize my hobbies to pay the bills?
Don't get me wrong, it'd be fun to keep making Quake maps for free for a few hundred players forever. But it'd also be nice to be able to justify the amount of time and work it demands from me. I've since concluded that the main obstacle here is that the maps are trapped inside Quake, which people will not pay me money for.

Thus for the past few months I've been building "Scopa", a level design .MAP importing plugin for Unity, as a kind of HammUEr / Qodot equivalent.
This is meant to be dev infrastructure for me to quickly build Quake-style levels in TrenchBroom, bring them into Unity, and hopefully sell some shooter games to the gamers eventually. Within the larger community, I'm also making it free, public, and open source, because I think more indie devs should adopt TrenchBroom as a general purpose 3D level design / modding tool.
Scopa is currently early in development, and not really ready for public use nor open source contributions. I invite you to "watch" it and follow its development. But I strongly recommend against trying to use it, because it may change a lot and it may be broken at any time.
Anyway this is all just to say -- I'll likely be making fewer Quake maps in the future, because instead I'll hopefully be funneling that level design itch into a small commercial shooter game release that hopefully isn't terrible and sells modestly. Wish me luck!
at 8:14 PM
Email ThisBlogThis!Share to TwitterShare to FacebookShare to Pinterest