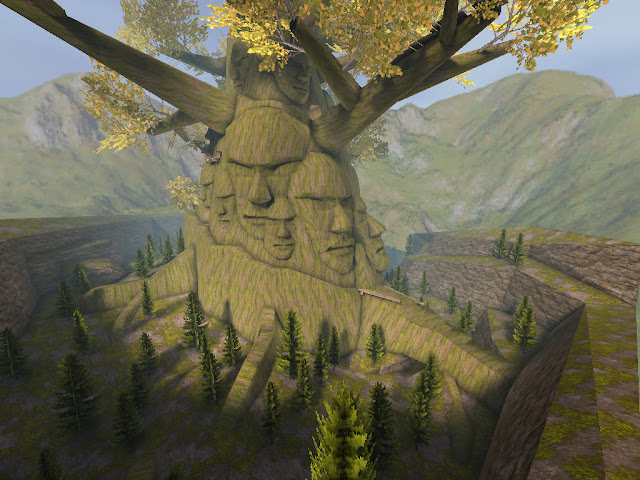 I like making sunny maps anyway, and the first CTSJ back in 2020 was when I made my first Quake map, so the event has a special place in my heart.

This post details some of my process and intent, and spoils what happens in the map. You may want to play it first if you care about that. 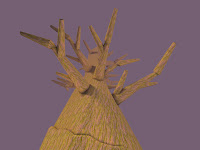 The two big influences for this map were Elden Ring and Halo.

Elden Ring features big tree levels where you have to platform on narrow branches that snake around. I liked the idea of climbing / descending a big weird tree, and building it in Quake would be a big challenge, so that's what I prototyped first.

My initial blockout relied a lot on a new Trenchbroom 2022 feature "linked groups", which allows a group of objects to update each other automatically, sort of like instancing -- I made one tree branch segment group, and then duplicated those groups into branches. 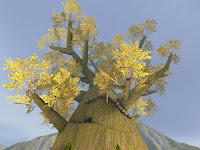 From there, I could edit one branch to automatically update all of the branches. This was useful when I was trying to wrap my head around the foliage shapes. Are the leaves compiling ok, are they glitching out, what lighting settings should I set for each one? Modern Quake tools have much better lighting controls than 25 years ago, including alpha masked texture-based shadows and some nice ambient light configs, but it's still pretty primitive by today's standards and I had to iterate a lot to balance the shadowing vs. the self-illumination for a natural look. 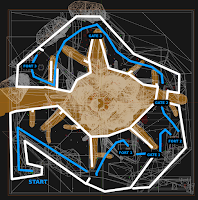 The other design influence here was Halo, with its big rolling hills dotted with trees and little forts. Since the level already had to be really big to accommodate the scale of the tree, I figured I might as well do something with the landscape. I decided on a circular flow orbiting the tree, similar to Halo 1's The Silent Cartographer / the Half-Life 2 mod Minerva: Metastasis.

This early prototype felt weird to play, because the player could just run around the big open landscape and lead monsters on a big chase. I had to slow down the player / make the flow more chunky, so I could structure it better.

So I divided the bumpy terrain into quadrants, with big tree roots gating each section. I wanted to emphasize the tree's influence on the landscape, and it felt less artificial than building walls or random cliffs. 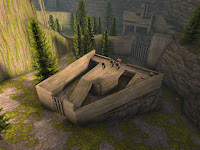 To unlock each root gate to the next section, the player must fight their way into a little fort and press a big obvious flashing red button. I figured the forts would be made out of wood, and I got bored of detailing them so I figured an angular modernist Fire Island Pines beachhouse look would work well. (In my head canon, all the monsters in Quake are upper middle class gay men.)

Each fort has a different semi-obvious weakness, like a shadowy "secret" underground passage, or a wall that's just a little bit too short. Two of the forts also offer the Ring of Shadows, which turns the player temporarily invisible to non-aggro'd monsters, and in Copper it also makes them harder to hit for aggro'd monsters. It helps supplement the stealth fantasy in a game with basically no stealth mechanics. 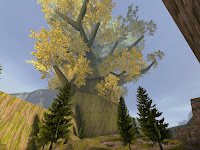 At this point, this first half felt OK to play, but the second half, the actual tree part, wasn't really working for me.

It wasn't really fun to fight on the actual tree branches. The tree fantasy meant it all had to feel organic and continuous with lots of curves and slopes. However, one "charming" quirk of Quake movement physics is that the player slowly slides down the gentlest of slopes, even while standing still. Monsters have similar issues, where they are either leashed to their branch, or fall off immediately. This makes these sloping curvy tree branches just feel generally unpleasant and unstable to use, from both a player and designer perspective.

(A brief rant: to me this is a clear case of retro game community Stockholm syndrome / collective Kool-Aid poisoning, where in any other game this "sliding down a 5 degree gradient" behavior would've been classed as an undesirable physics bug to be fixed promptly. But instead in Quake land, everyone's like "we should never fix this weird bad thing" and it's my fault for building so many ramps and slopes!)

Unfortunately I had already made the mistake of tweeting out screenshots of my progress, which led to other Quake mappers bullying me encouraging me to finish it. So I threw in some flying monsters, quickly put together a "Romero-lift" ending setpiece, and called it in.

This map takes up basically the entire playable area in Quake 1, but in the end the bigger problem was filling it with varied compelling Quake gameplay, which went way past my expertise and interest.

The end result is OK and certainly not the worst, but next time I'm going to make an exploration map with minimal monsters.

You can play this map, as well as 21 amazing levels, in the Coppertone Summer Jam 2 pack available for download at the new Quake community hub Slipseer. 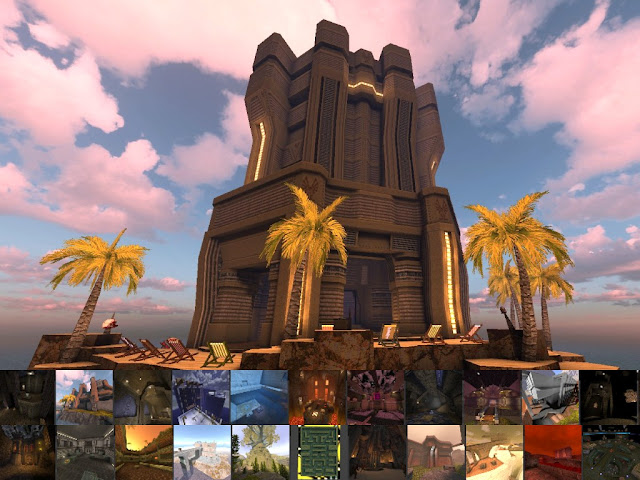 at 9:35 PM
Email ThisBlogThis!Share to TwitterShare to FacebookShare to Pinterest