Poto and Cabenga: The Unspoken Story 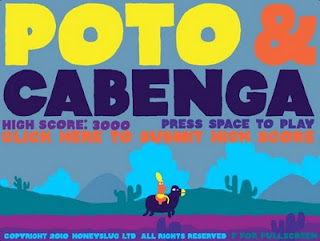 First -- go play it. (image stolen from Rock Paper Shotgun, which cites my Facebook status as its source -- oh, journalism!!)

Look at the art style -- deep purples, a salmon-y orange, a magenta... almost no other game uses a palette like this. It's like a big "fuck you" to the grayed noisy wastelands of Gears of War. The flat cut-out layers work well for this type of game because platformers rely on silhouettes and clear space divisions between floor / wall / character. (Adam Saltsman explains this better than me.) So the art is pretty, unique, functional, and probably simple (but not easy!) to draw. Win win win win.

Listen to the sound -- when you collect a coin in Mario, why does it sound like that? Is that sound especially "coin-like" in itself? The sounds in Poto are similarly kind of abstract. Unique enough to be distinguishable, chip tuney enough to nod to the game's GAMMA / indie platformer roots. Speaking of abstractness...

Look at the characters -- what the hell are they? Some orange-yellow guy riding a purple platypus donkey duck thing. Does it matter? Their story is simply and masterfully told:

You (you being the orange yellow guy contrasting directly with the background, you being the rider, you being the only vaguely human thing) spend the first minute riding your animal. Both you and your mount move together as one, responding to the same button presses.

Then you're separated and the real game begins. One button controls both characters but in a pretty novel way that I haven't seen in many games. What results is a strange synchronization between both characters as they both move, still to the same button presses, but to a slightly different complementing rhythm to each other. In other words, they are dancing.

How do you know this animal is your friend? How do you know you have to be re-united? Because two people dancing, moving through the world together, is a beautiful thing. Because the controls and gameplay unite both of you and create a bond between both characters.

It's not some silly textbox pop-up saying "Poto cared a lot about Cabenga," it's a not a silly cutscene with the two characters embracing or one petting the other -- it's the controls and the gameplay mechanics that tell this story. It's what Ubisoft tried to do with the 2008 Prince of Persia re-invention, but ended up kind of failing. (I'm not saying textboxes or cutscenes are unilaterally bad, they're merely lazier and less elegant than, say, actually playing the game and interacting with your partner.)

The best part? It's fun to play and it's relatively challenging to master.

Anyway. The indie platformer has a lot of life left in it, so quit hatin', especially when they're as smartly designed as this.
at 2:18 AM
Email ThisBlogThis!Share to TwitterShare to FacebookShare to Pinterest