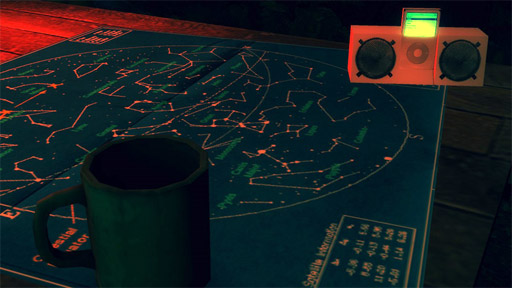 Previously: the technical design behind Polaris.

All first person shooters consists of two basic verbs: looking and moving. Mirror's Edge brought on a lot of discussion about the "moving" aspect of an FPS, and it seems we're headed towards some holy grail of body awareness with that - but what about the "looking" aspect? The "looking" verb usually has no cost associated with it, no power - it is a passive action on the part of the player, mere observation. So how about we attach some more significance to the act of looking in an FPS? Can "looking at stuff" be fun too?

This is why nearly all first person games are about shooting: it is the easiest way to make "looking" into something powerful. Hey, I'm looking at your head, and now I'm going to make it explode.

The mechanics of stargazing are about perspective: stars that are lights years and light years apart can appear to be next to each other, forming constellations -- except they don't really exist. It's only when we look at them that they do; that is, the act of looking becomes performative and it actually creates something.

That's what the narrator is doing: looking back. 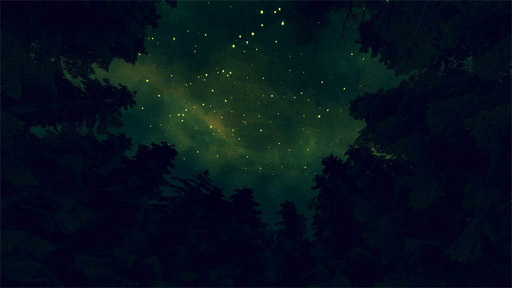 The first and last line of Polaris (assuming you reach an ending) is "I just don't really think about him that much." It pre-supposes someone asking the narrator about 'him,' it indicates some sort of back story, and serves as a bit of finality. You might believe the narrator at the beginning, but by the end you're definitely skeptical -- if the stupid stargazing date didn't mean anything, why remember all these details?

In a previous post "How to Close Read Games," I proposed a model of reading games that follows the practice of close reading in literature, which posits that there are many different ways to read a novel -- and so there are many ways to play a game and interpret it.

But of course the significance of your ending depends on how you perceive the characters -- the narrator and Dylan. So here's how I see player character:

No player character is an empty vessel. All video games make assumptions about characters by virtue of how you control the character -- move forward using the analog stick, down right up punch to do an uppercut, etc. Most of the time we don't pay attention to control abstraction because we're all experienced gamers who know genre conventions. (Though try playing QWOP to see how difficult the simple act of "running" really is when represented on a bio-mechanical level instead of just pressing "W")

Do you love running down the stairs at full speed in real-life? Do you do it without a moment's hesitation in an FPS game? In this sense, we abstract / simplify movement a lot in the genre -- but I'd argue this is an exception to the idea I just outlined above because every FPS does it. How much fun would an FPS be if you were tripping and falling every few seconds?

Ignoring genre control conventions like that, the controls tell you a lot about a character. Is the character an obese whale? They'll probably have a slow turning radius. Is the character an old lady? She probably doesn't have a "run" button. Is the player a big clumsy minotaur? Walking in a straight line is probably really hard for him.

Or maybe you're a game series that starts with "Resident" and ends with "Evil" that prided itself on your character -- a skilled fighter and survivor -- having the maneuverability of a shopping cart. 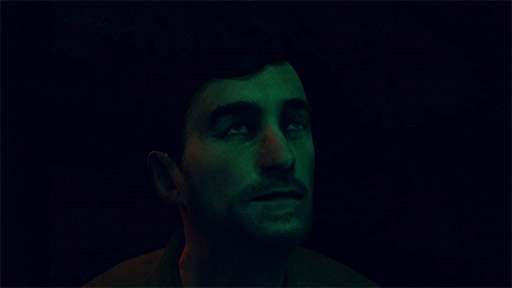 So, I disabled jumping and crouching in Polaris. Partly to prevent you from doing weird stuff but mostly for the same reason you can't shoot Alyx in the face -- because the player character would never have done that. In that same vein, your choices don't necessarily override the character's world view. There is no way to "win" in this respect, and you cannot force the narrator to think this is "winning." There are only different ways to see what breaking up meant to the narrator.

One playtester lamented that he wasn't able to reach the "good" ending - and I think that's a false promise offered in many games. In real-life you might do the "right thing" all the time (or think you are) and you're lucky if you get good results from it. Plus at the time, I was unhappy with how my last relationship had fared, so it seemed therapeutic to create a game that involved break-ups.

(By the way: I intended the narrator to be gender neutral, which is why recording lines and getting some voice over would have ruined the effect. I still think of the narrator as gender neutral, even though I'm retconning it in Much Madness to be James since that's what everyone's assuming anyway.)

Anyway. Polaris is my favorite of Radiator vol. 1 -- it's simple, uncomplicated, and I built it within 2 weeks. It's the most disciplined I've ever been. Every other project has taken soul-crushingly long to build. For future projects, I intend to return to this kind of limited scope instead of the giant sprawling messes that I'm working on these days.
at 3:26 AM
Email ThisBlogThis!Share to TwitterShare to FacebookShare to Pinterest