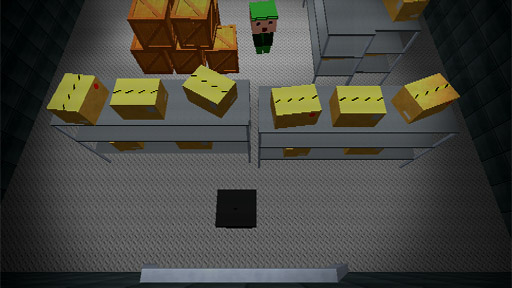 Inside Job by Richard Perrin is a short stealth game in Unity with (what is, at least to me,) a very obvious source of inspiration that's well-executed. It's also not very difficult. Give it a shot. (from this week's TIG Source round-up)

The blocky characters and funny / fantastic static cutscene style also remind me of Increpare's Infidelidad, which is also short and easy and fun. ("NIPPLES!!")

Spoiler thoughts after the jump!! (No, seriously, just play this first. It'll take you, like, all of 7 minutes.)

S
P
O
I
L
E
R.
(copying Emily Short with that,
since I see some Google Reader
folks in my analytics)

First off, I love the beginning cutscene, with the car crash and the blinking brake light. It's extremely efficient in terms of storytelling but also very resourceful: that's probably 2 .wav files and 1 .png and a bit of scripting. That's it. Yet it's quite powerful when you reach the "fourth floor" and realize what exactly happened there. 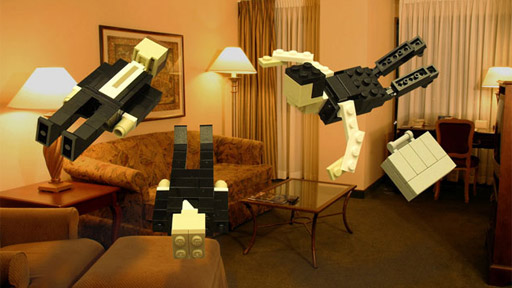 I also really like the "mind control" ability -- it stays the same, yet its meaning changes by the end of the game.

At first, the player only values the ability in terms of mechanics. It is (a) a way to make sure that players who are really awful at stealth can still complete the game by completely neutralizing an NPC, (b) a way for cautious players to scout out the entire level and plan their movement solution. And pro players can just ignore it entirely. This is good design for player accessibility because it's not a blatant "here's a tutorial tool-tip" or a "you're on easy difficulty" kind of thing; it's organic.

And that's how that ability stays for the first 2/3rds of the game -- there's no "narrative" function because you quickly realize that "mind reading" is just feeding you a canned line about the drudgery of work or the NPC's depressing life or whatever. It's only useful to you through gameplay; you don't care about the "story" it shows you.

But then the fourth level deviates from the previous ones -- guards are skinned like devils and they're already neutralized, facing the wall. You use your "ability" and realize they're manifestations of the man's guilt. Now this ability is useless in terms of gameplay, since the NPCs aren't threats, but its much more important in terms of narrative. The ol' switcharoo.

Like me, maybe you "semi-ghosted" every single level ("ghosting" in the Thief games means completing a level without ever interacting with a single guard; "semi-ghosting" is less stringent, simply keeping all guards active)... but at the end I felt compelled to mind-read every NPC in the last level.

And the best part is how that change in strategy came to me: Perrin didn't have a giant text message saying, "Read their thoughts now!" Instead, the weird deviation in level design and NPC graphics made me try something different and I was rewarded with more detail about the man's motives and backstory. It's organic.

It's the language of games; less talk, more rock.

(Suggested improvements for the author: compress your assets, why on earth is this almost 40 MB? And then once you've optimized it, embed it on a web page so people can just jump in and play it. If you force people to download a standalone, you're almost negating all of Unity's advantages.)
at 11:32 PM
Email ThisBlogThis!Share to TwitterShare to FacebookShare to Pinterest