"How to “Get Better”: Approaches to LGBTQ-relevant Video Games" at Games for Change Festival 2012 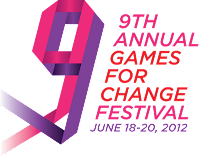 So on Tuesday, I'll be speaking at the 2012 Games for Change Festival at NYU about gay stuff in video games. Me and MIT-Gambit darling Todd Harper were originally going to tag team it, but as the schedule got finalized, the logistics for Todd zipping down here got less tenable, so now I'm just going to be dancing on my own.

I've been scheduled in a 5 minute time slot labeled "Rants" on Tuesday at 12:15 noon, on the main stage. That's just 5 minutes to foam at the mouth about heterosexual tyranny!

It's been difficult writing this talk because I don't really know the demographics of the audience here -- from what I can grok, it's mostly government / NGO education groups, some private sector education people, and the odd sprinkling of AAA game industry. (That means no Mass Effect jokes; that means an entire audience will lack fundamental video game literacy for a talk about video games; that means I'm screwed.)

But, uh, we'll see how it goes.
at 3:41 PM
Email ThisBlogThis!Share to TwitterShare to FacebookShare to Pinterest