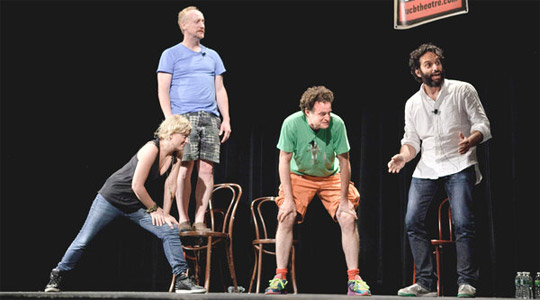 The current narrative systems prototype Shakespeare has been somewhat disappointing so far: the director switches, seemingly erratically, between 5-6 different plot threads, and nothing seems coherent. I need a way of (a) allowing the player to influence story pacing / scope, and (b) a way for the system to push back, to try to force some story pacing / scope.

For this, I'm looking at how improvisational comedy generates and upholds structure. You might've heard that improv is about "always saying yes," but there's a lot more to it, apparently.

Specifically, longform improv comedy involves actors cooperating to "find the game" -- to find the core of a joke. Each actor makes "offers" to expand upon a premise and move action forward, hopefully toward a funny destination, and usually, actors err on always accepting offers ("saying yes") and building upon it since "blocking" offers frustrates your scene partners. However, it's very possible to "say yes" to a premise while still "blocking" the "game."

Here's an explanation from an NYC improv comedy personality, Will Hines:


Offer: "Thanks for helping me move. To pay you back, here’s a bag of fish."

I say the offer is paying with fish is what’s gonna be funny about this scene. That at his/her heart, the actor wants that big of fish to be a ridiculous thing. Your character can accept that bag of fish as appropriate or inappropriate but to be supportive, the actor must help keep that idea of paying with fish as a funny thing. We call it a “game move” at UCBT.

Response: "Fish? A bag of fish is not the right kind of payment for me helping you move." (framing it as a weird thing)
Or, Response: "Wow, a whole bag! So generous!" (you[r] character is going along with it, but we can tell that the actor knows this is a silly/funny thing we’re playing with.)

[...] That’s what you have to realize: once someone makes a game move, what you have to confirm is that it’s the funny thing. [...] [M]ake sure you don’t make the fish so normal that it’s no longer a funny idea. Like this would be bad:

Offer: "Thanks for helping me move. To pay you back, here’s a bag of fish."
Response: "Thank God. You know I love fishing, I can use this as bait."

Offer: "Thanks for helping me move. To pay you back, here’s a bag of fish."
Response: "Thanks. Man, you had a lot of weird furniture."

Because now you’re ignoring your partner’s offer and replacing it with one of your own. [...] I think it happens when someone is not listening, or someone has gotten too accepting of crazy things. They have forgotten to hold their scenes to a high standard of reality, and so silly things are no longer noticeable.

All I’m really saying is that if someone wants to make something The Funny Thing (the game, the premise, the unusual thing — call it what you want), that you agree to make that thing The Funny Thing.
What if we frame interactive narrative as the process of negotiation about a shared reality AND the significance of that reality?

We now need a structure for this negotiation. Longform improv comedy provides us with "The Harold," which on a high-level, is about giving space to explore a scene and "find the game." It is basically a series of improvised interspersed with "group games" that discourage plot continuity and encourage thematic continuity instead. Some situations will live throughout the entire act as a recurring motif / pattern, while others will prove to be dead ends and they'll be dropped within the first few minutes when no one can find anything really funny about it. Plot holes are frequent because plot isn't really the point if no one cares about it. (If ludonarrative dissonance is utterly pervasive in a game, does that mean it's no longer dissonant?)

... which is sort of at odds with Shakespeare's design goals, that precisely emphasize plot as a governing principle of narrative. But I think I can make it work anyway.

So now I'm planning to design / implement these general changes to Shakespeare:
I'm predicting this additional structure will organize story flow better and make stories easier to write as well, since authors can make more assumptions as to how the game generally works.
at 12:00 PM
Email ThisBlogThis!Share to TwitterShare to FacebookShare to Pinterest