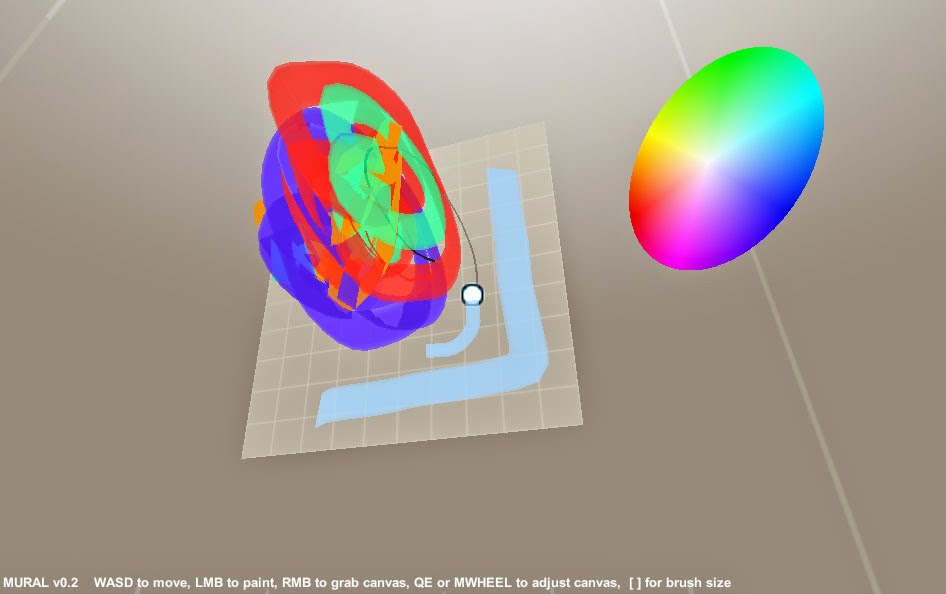 EDIT: v0.21 adds .OBJ export from the webplayer; you can now actually use this to make models and import it into whatever you want. (If you want to use this in Unity, you will need to apply a material / shader that uses vertex colors and doesn't cull backfaces, so pretty much any of the "Particle" shaders)

There are 2 common modes in 3D polygonal modeling: vertex manipulation and sculpting. But for many of these workflows, a 3D mass exists mostly as a surface to be unwrapped and painted. If all we need is a 3D canvas to paint upon, why can't we just go straight to the painting part?

"Mural" is an experimental freehand 3D modeling tool similar to SketchUp's "Freehand" tool or the impressive Tilt Brush, except SketchUp imagines it more as a tracing aid and Tilt Brush relies on VR hardware and doesn't readily export geometry.

I want to make Mural as an accessible 3D tool that borrows game UI metaphors (specifically, first person mouselook) and directly exports the resulting 3D models for use in games, or anything, really. Many of the models made in Mural will not look like "traditionally" modelled 3D objects, and intentionally embrace glitchy non-representational aesthetics, twisted normals, vertex colors, and z-sorting artifacts. If it hasn't already occurred, I imagine the "politics of 3D" will shift to embrace these phenomena as artistic features rather than aesthetic flaws.