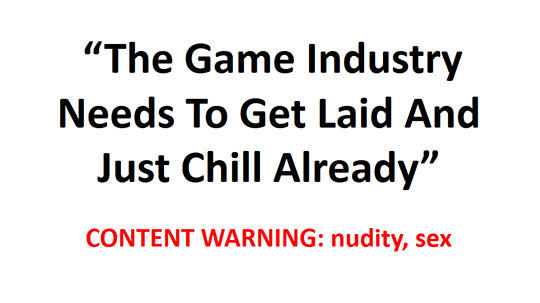 This is a lightly edited transcript of the 5 minute microtalk I delivered as part of a panel at GDC 2016. Thanks to Bennett Foddy and Richard Lemarchand for their advice and assistance.

I’m an indie developer, and I make small experimental games about sex and intimacy. Games about spanking, about sucking, about dick pics in your mom’s bathroom, about showering... you know, things we all enjoy. I also try way too hard on my graphics. My shower game Rinse and Repeat is the most technologically advanced male shower sim on the market -- I waste so many draw calls on physically simulated refracting water particles BUT I DON’T CARE, it’s clearly worth it.

I kinda feel like I have to make these games because few people do. By and large, even AAA games you might associate with gay sex -- they aren’t really about gay sex. I firmly believe we can all do better in the future. (To learn more about sex games, see my sex games talk.) 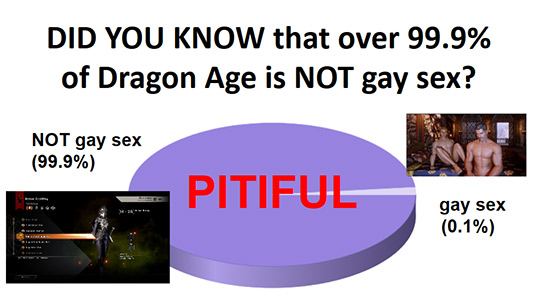 But my sex games are also about how sex is often NOT SEXY. At the end of my dick pic game, for example, your dick pics and chat transcripts get leaked to the internet. My game's community site currently has over 25,000 stolen dick pics from players. This violation of privacy should scare players a little. Sex can be scary like that.

So why did Rust, a multiplayer survival game full of penises, sell better than Cobra Club, my dick pic game that ignores all that multiplayer survival nonsense and just cuts straight to the dick -- is it more talent? Marketing? Is Rust just a better game? Well, I WISH THAT WAS WHY! Because the actual reason is, I can’t even sell my game at all. If I do, I risk PayPal banning me as a “high risk account”. Even if they don’t ban me yet, I’m young and poor, I don’t think I can even risk arguing with PayPal. 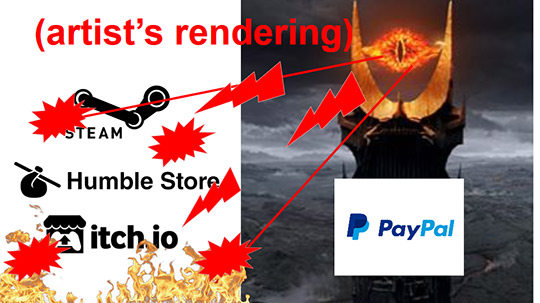 The PayPal Acceptable Use policy reads, "You may not use the PayPal service for [...] certain sexually oriented materials or services."

What does "certain" mean? Which ones? They won't tell you. These vague policies let banks and payment processors like Chase ban a condom company in 2014 for selling condoms, even though Chase managed finances for Trojan Condoms. They say not to "cross a line", but the line is invisible and constantly shifting, with special exceptions carved out for larger companies.

This sucks because PayPal is used all over the game industry. PayPal can threaten to walk away from Steam, or Humble, or even Itch.IO... If PayPal makes Gabe Newell choose between carrying my dick game OR letting customers buy things with PayPal, he’s probably going to choose PayPal.

But PayPal is not the only company bad at sex. Did you know that Twitch.TV bans games? [shockingly ask audience members: Did you know? DID YOU KNOW?]

Here’s what Twitch tells you when they ban your game: 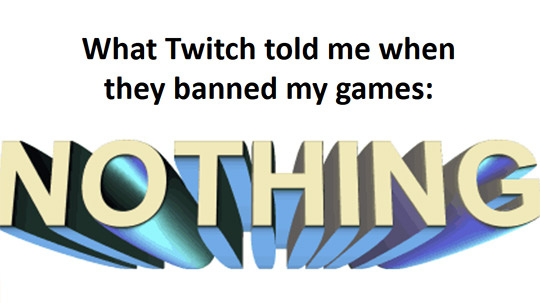 NOTHING. Twitch tells you NOTHING when they ban your game. When did Twitch ban it? Why did they ban it? They won’t tell you. I know this because they’ve banned my games. TWICE. And no e-mail. Not even a little pity tweet. 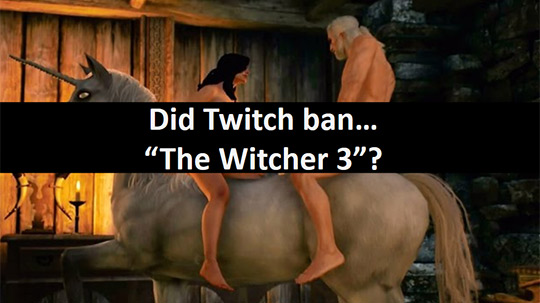 Did Twitch ban Rinse and Repeat -- my weird shower game that ends in loneliness and rejection -- even though I even went to the trouble of pixelating the penises -- DID TWITCH BAN IT?... [wait for audience response]... Yes, they banned it. And if my players stream it, Twitch will ban them too.

Did Twitch ban The Witcher 3, which has dozens of topless women, hundreds if you count some of the monsters, as well as this really cool unicorn sex scene -- DID TWITCH BAN IT?... [wait for audience response]... Nope, it is NOT banned! I guess Twitch thinks having sex with women isn't sexual.

Did Twitch ban Second Life? Keep in mind that in 2013, only 10-15% of private player-owned land in Second Life was used for sex. (And if you don’t know what Second Life is, ask your parents.) DID TWITCH BAN IT?... [wait for audience response]... YES. All of Second Life is banned. 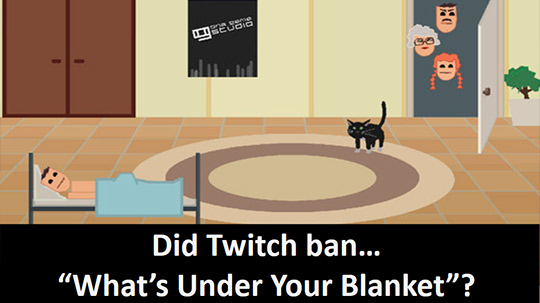 Did Twitch ban South Park: Stick of Truth, an RPG where you fight giant testicles and penis monsters, and get graphically probed by aliens? DID TWITCH BAN IT?... [wait for audience response]... NO, Twitch did NOT ban this game / media franchise that directly seeks controversy. 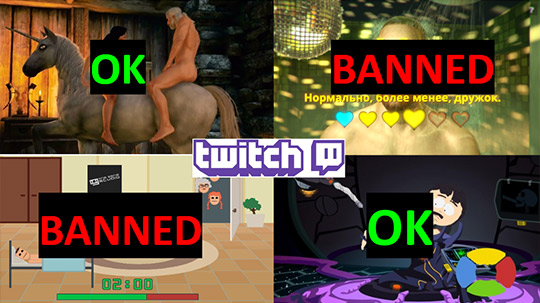 So not only does Twitch have a bad policy, but they also enforce this bad policy very inconsistently. If I were cynical, I would say that Twitch allows plenty of sex and nudity in games with big publishers, but isn’t nearly as “understanding” with small indie games.

But it doesn’t have to be like that. Here’s Vimeo’s Guidelines: “... we allow depictions of nudity and sexuality that serve a clear creative, artistic, aesthetic, or narrative purpose.”

Compared to PayPal and Twitch, getting banned from Vimeo was so PLEASANT -- they actually talked to me, and then I flagged my video as Mature Content and put it behind an age gate, and e-mailed them back -- and then they understood and they UN-banned me, and now we all enjoy the fruits of clear consistent boundaries and communication. And all that makes for some great sex! 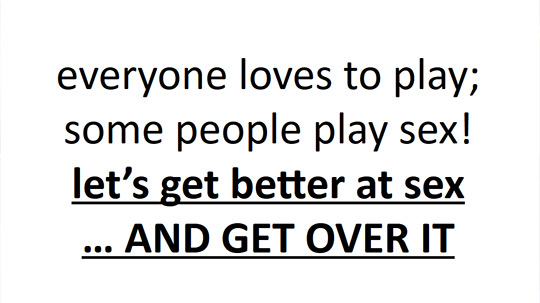 If games want to be the most powerful industry and artform in the world, then don’t lose your shit about a dick joke, ok?

EVERYONE LOVES TO PLAY GAMES! SOME OF THESE GAMES ARE ABOUT SEX!

DON’T BAN GAMES JUST BECAUSE THEY ARE ABOUT SEX.

SOCIETY WILL NOT COLLAPSE.

CHILL OUT. GET OVER IT.

Thanks for listening.
at 11:30 AM
Email ThisBlogThis!Share to TwitterShare to FacebookShare to Pinterest