From modders to mimics: a people's history of the "prop hunt" genre 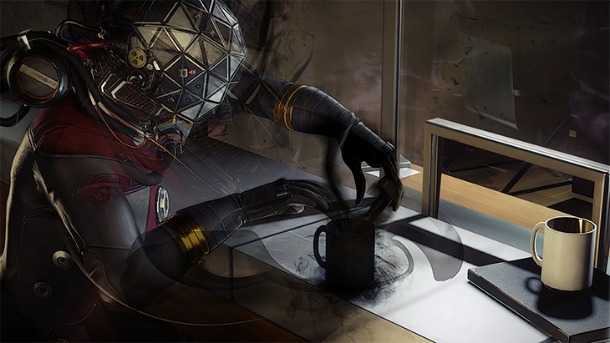 This post contains minor gameplay spoilers for the first hour of Prey (2017).

Add the "prop hunt" to the list. The prop hunt is interior design meets hide and seek, where hiders "hide" in plain sight, disguised as the decorative clutter common in video game worlds, and seekers must guess what is inanimate clutter and what is sentient clutter. Arkane Studios' recent sci-fi shooter Prey (2017) cleverly commercializes this mechanic in a way that modders never could, and while it's nice to know they're paying attention to current trends, I think it's also important to remember the modders that usually get erased from game design histories. In this case, I argue that modders predate AAA design practice by at least 19 years.

CrateDM was a Quake 2 mod released on April 14, 1998, made in an hour by Chris "Shatter" Holden. As far as mods go, it was really simple from a technical perspective: a small map full of crates, and a PPM (plugin player model) that let players appear as crates, and no custom code or anything... which, I think, is brilliant. We often argue video games are made of code, and here was a new game genre created without any code at all!

Here is Holden's process and notes from the readme.txt:

Later on one day, I was experimenting with some PPM stuff while I was working on a new one, and I made a crate ppm. Now, this was just for testing things in the way of ppm creation, but I laughed my ass off watching it move around the map. I considered the possibility of DM one on one with both players using this crate ppm in a map with a lot of crates, thus you could spot running and "blend in" so to speak. I didn't really see any of the q2 maps that had the number of crates that I was looking for, so I spent around less than 20 minutes and tossed together a single room map. This room was just a large room with a LOT of crates and weapons/items. I sent the mod over to a friend and we played for several hours having a great time with it. The gameplay was insane, since the whole time it's just funny to see a crate sliding around the map, and then when you're mid battle, all of the sudden, your opponent disappears. It was extremely fun and creepy, so i figured, why not release it?

But first of all, I warn you, this is VERY simple, I made this entire thing in under an hour, the crate ppm is nothing more than a crate, period, don't expect anything flashy in this. It's just good fun with a dumb idea. :)

This is also real fun with bots, since it's harder to see them, but they can see you anywhere.

This confession betrays a lot of modder's anxiety: He only spent 20 minutes on the map! "Don't expect anything flashy"! It's "just good fun with a dumb idea"! The young Holden of 1998 really wants us to believe that he barely cares about what he's made, and he's merely dropping it on us as a courtesy. But I think he made something arguably much more interesting than what he was doing commercially as a professional muzzle flash artist for a now-forgotten Quake-like, and if we read a lot into this, then maybe it was emotionally necessary for Holden to play down CrateDM as something supposedly insignificant and trivial.

Fortunately, his fans were less bashful...

In 2002, Paul Ehreth made his own version for Half-Life 1, a mod called Boxwar. The community hub Planet Half-Life had this to say about it at the time:


Those of you who cut your FPS teeth many years ago may remember a little minimod for Quake 2 by the name of CrateDM. The idea was incredibly simple; everyone was a crate in a level full of crates. Before you begin to roll your eyes, consider this one simple fact; when you stop moving, you blend into the background. Thus sets the stage for one of the more unique gaming experiences out there. [...]

[...] Boxwar isn't the kind of thing that you play in order to be competitive or prove skill; rather, it falls under the category of "weird fun." Just select a box style and have fun sneaking up on people. It's really rather eerie to see the boxes gliding around the rooms and hiding. In fact, a third-person view feature lets you position yourself properly among stacks of boxes to blend in more effectively. If you can make it without being seen, you can often hide yourself higher up on a stack of them for a real surprise to anyone who's watching at eye level.

Boxwar's most notable feature is the third person camera view, essential for understanding your body as a box instead of a person. It shows how a disembodied perspective helps us understand our relation to the rest of the game world, as part of a little diorama / scene we are assembling -- we better understand how well others will see us, and how we might blend-in with the rest of the world.

Both CrateDM and Boxwar settled on crates partly because they've been historically lampooned but also partly because of the design constraint on clutter: you needed to render a lot of in-game objects all at once, and plain boxes were basically one of simplest possible things to render. As computers and internet connections got better, that freed up games to pursue more complicated objects beyond just crates...

Suicide Survival was a Half-Life 2 Deathmatch mod by Tobias Baumann released on November 28, 2008, pitting humanoid gardeners against sentient potted plants. The third-person camera'd shrub players must hide / blend in with the scenery, then pop out and detonate on first person camera'd gardeners. For self-defense, the gardeners only had a book they could throw at a potted plant; many gardeners complained the book velocity was much too slow to catch a speeding plant. I guess the design was skewed heavily in favor of the potted plants because that's what leads to great moments, like getting caught unaware by a plant you thought was safe, or looking over a courtyard full of 30 potted plants and trembling with fear.

With this emphasis on multiplayer survival jump-scares, Suicide Survival was contemporary with other asymmetrical hide and seek Source mods like The Hidden, where one invisible monster player faced off against a SWAT team of players. However, the problem with The Hidden was that squinting at invisible things is boring to play and to watch. In contrast, the absurdity of watching a sneaky shrub is much more entertaining.

But then why stop at shrubs?

Prop Hunt was a Team Fortress 2 server-side mod by Luke "Darkimmortal" Foreman, first released on October 22nd, 2009. (EDIT: it was also apparently a Garry's Mod mod since 2007! Huh!) The BLU team players were Pyros who lost health if they sprayed flames from their flamethrowers, while the RED team players were Scouts disguised as various "props" like buckets and trees and chimneys, trying to survive until the timer runs out. I think the main gameplay innovation here was to flip the dynamic: instead of hiders ambushing seekers, it is now seekers who try to flush-out the hiders. As the video shows, it's less scary and more frantic slapstick, resulting in more motivated seeker players. It's much more replayable than Suicide Survival.

The crucial technical factor was in the art and level design. Team Fortress 2 maps circa 2009 were big enough and had enough pre-existing clutter everywhere -- and not only that, but all the props were evenly lit in a flat cartoon style, which helps imposter props look identical to pre-placed props. In this way, I think the prop hunt could only have emerged around 2009 with this critical mass of factors: rising industry-wide standards for cluttered worlds combined with a trendy non-photorealistic art style and Valve's production resources / server SDK support.

By expanding the crate-hunt or shrub-hunt into a generalized prop hunt, we also elevate this mechanic to improvisational interior design. When you play prop hunt, you have to ask yourself, would the level designer have placed a tree there? How does that rock relate to the other rocks, which rock doesn't belong? And if we transplant that thinking into a genre synonymous with environmental storytelling...

Prey 2017's "mimic" NPC is a crab-like alien monster that can disguise itself as any similarly sized object in the game -- and then when you least expect it, it pops out and attacks you.

Historically, mimics in RPGs usually disguise themselves as enticing objects like treasure chests. Prey's mimic certainly continues that tradition, sometimes taking on the guise of valuable item pickups like medkits or weapons, but it also builds on top of that history by mixing in some of this recent prop hunt tradition. Sometimes the mimic AI will turn into a cardboard box or a chair -- in a locker room, it might turn into a nearby towel -- or in an office, buckets or mugs or even a "wet floor" sign are all fair game.

Prey mixes Suicide Survival's sudden anxiety with Prop Hunt's variety of disguises, but also goes where modders can't: it adds complex pre-scripted and systemic AI with frantic alien movement animations. Can a mimic climb on walls and ceilings, can it disguise itself as shelves or light fixtures or people? For a while, you have no idea what's the mimic's limits are, and that's why the first few hours of Prey are brilliant: the game successfully trained me to run away from office chairs and lamps. With this, the mindless fidelity and production value of AAA games performs a mimic maneuver itself, transforming into a meaningful gameplay mechanic AND NOT ONLY THAT BUT that mechanic conveniently involves admiring the normal maps! And there's a semen gun?!... Well done, Arkane, well done.

While Prey never quite matches those first few hours again, and maybe didn't sell as well as it should've, we can still understand it as the culmination of 19 years of modders' research and experimentation, ending in a banner year for objects in games. Here in 2017, the amazing PS4 game Everything debuts as the walking simulator of prop hunts, and object-oriented ontologists are stirring up Twitter wars in arguing for objects over people. And outside of games, we collectively fear the rise of AI, drones, internets of things, and weaponized smart homes...

But I'm not afraid! Prey has taught me how to productively deal with this anxiety around objects: just hit it with a wrench.

RELATED: if you liked this, check out the "People's History of the First Person Shooter" series I did for Rock Paper Shotgun back in 2012.
at 4:58 PM
Email ThisBlogThis!Share to TwitterShare to FacebookShare to Pinterest