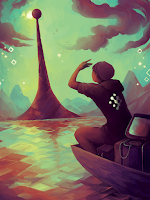 If you're around NYC this month, a bunch of games-related university programs are running their end of year shows. It's always very rewarding to see the fruits of so many students' sweat and tears (a lot of tears), and it also doubles as a fun social event where you often run into old friends or Twitter acquaintances.

Here's a rough schedule (in chronological order) and some brief commentary about what to expect from each show. Hope to see you there:

New York University, IDM (Interactive Digital Media)
IDM is a program focused on the intersection between technology and performance -- so they see games primarily as part of a broader study of interaction design and art, rather than games for the sake of games. Accordingly, a lot of their student projects are often more about the types of magical thinking that a game-like frame enables, which I'd label as a conceptual lens toward games. For more info, see the IDM Show Spring 2017 website.

(Downtown Brooklyn)
one night only: May 5, 6-8pm at 2 Metrotech Center, 8th Floor


Parsons School of Design, MFA DT (Design and Technology)
MFADT is the graduate program where I studied, and where I've taught for a few years. Like IDM, the playable projects here are more interested in narrative or conceptual goals, and do not focus on hardcore gameplay or tactical depth. However, there's also a strong tradition of hardware hacking -- the 2017 IGF alt.ctrl award went to a Parsons team. For more info, see the full "SPECTRUM" website.


New York University, ITP (Interactive Telecommunications Program)
As Parsons students we often considered ITP to be a friendly rival, but now I just see them as a slightly weirder and scrappier cousin. Like MFADT, the playable projects at ITP shows are usually more about a narrative or conceptual focus, but unlike MFADT, they often rely more on performance and installations. For more info, see the ITP 2017 Spring Show website.


New York University, Game Center
This is the main department where I currently teach now. Unlike MFADT or ITP, we don't really do much hardware or fabrication because there's no real technology mandate here, so we also show a lot of non-digital analog board games and card games too. That said, this year, I'm pushing to show a little bit more VR stuff. For more info, see the 2017 Student Show website.


... and that's all I've got. Again, see you there maybe!
at 11:00 AM
Email ThisBlogThis!Share to TwitterShare to FacebookShare to Pinterest