On "Let's Meat Adam" by Soulsoft 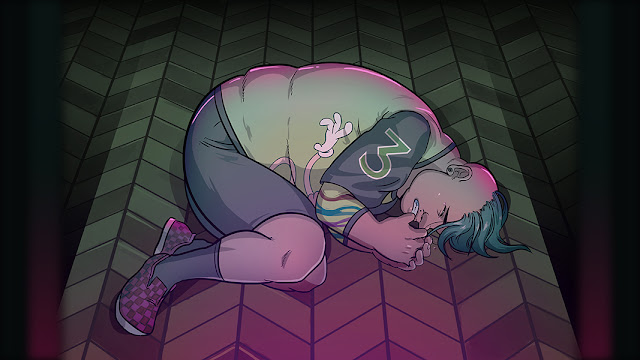 Let's Meat Adam is a short gay erotic-horror visual novel puzzle game about being a hunky West Hollywood white dude trapped in a gory escape room. It was released back in March 2017, but I didn't see anyone talk about it, so now I'm bringing it up, and I want to unpack both its commendable bravery and its mistakes.

I think my main beef is the inconsistency. First, it's as if 3 different artists worked on this game, and none of their visual styles cohere. But "inconsistent" also describes the game's politics: it admirably wants to reconcile intersectionality with the gay eroticization of white muscle dudes. This is a difficult design problem that I also struggle with in my own games! So much of the culture of gay sex, touchstones like Athletic Model Guild or Tom of Finland or Kenneth Anger or Joe Gage or the vast majority of gay porn, focus on a small subset of body types. It's surprisingly difficult to refer back to that history without perpetuating that same narrow focus.

Let's Meat Adam, bravely, tries to address this problem head-on. However, I think it doesn't quite succeed... 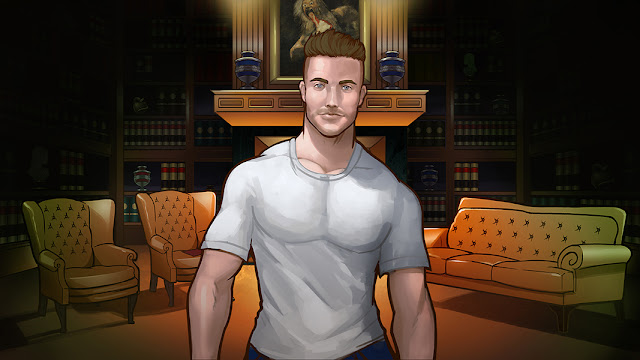 You are Adam, a hunky white 20-something aspiring-Instagram-model with one of those Macklemore haircuts, trapped in an escape room game gone wrong, with dudes from other gay "tribes" around Los Angeles: a trendy gym bunny, a lanky middle-aged daddy, a lumberjack muscle-bear, etc. That kind of cast is pretty par for the course, but there's also an unusually diverse set of gay people of color: a foppish fashionista, a bitter hipster twink, a stouter darker-skinned queer nerd. (Wow, more than one?!)

At the end, you find out it was all rigged, and some of your supposed friends are the true mastermind killers (!)... but who? Who faked their fear and/or death to divert suspicion, and why?

It turns out the murderer masterminds are the supposedly sympathetic victimized people of color: the fat dark-skinned nerd, the neglected East Asian twink, and your masculine-passing Latino friend, are all sadistic killers who manipulated everyone into feeling sorry for them! They form a twisted queer leftist conspiracy to murder gay white men for their fatphobia / misogyny / racism. Oh my god the murderers are literally SJWs run amok!!! 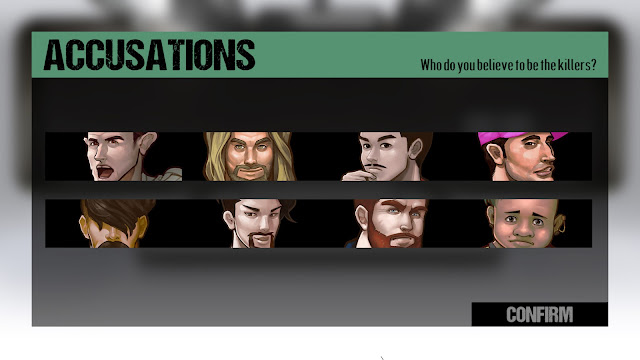 Now, a horror story about fat effeminate queer men of color methodically murdering every normative masculine gay white muscle dude they see -- is, to say the least, a pretty novel premise to explore. It really does strike at the heart of the "no fats / no femmes / no Asians" discriminatory bullshit going on with US gay men today. I really want to commend the writer for building-up that premise, and they even portray the murderers' pain as partly justified and sympathetic.

But unfortunately the catastrophic problem with Let's Meat Adam is that it "plays it straight" in the end, thus compromising its entire message. Since you play as the totally repentant Good White Guy Who Just Didn't Know He Was Racist, you get to sit down with those radicalized murderous social justice queers and Lecture For Your Life:
And with that speech, the killers are completely convinced and decide to spare you. 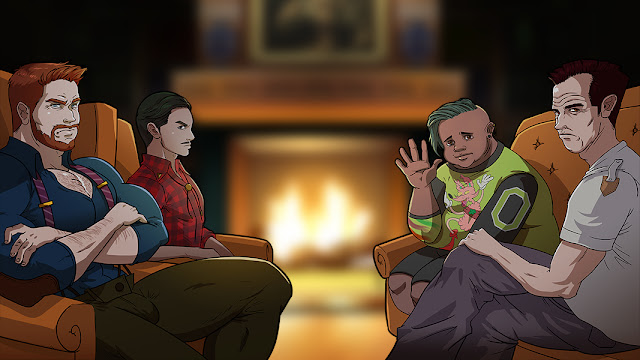 Again, within the history of gay eroticization, a focus on white beefcake isn't surprising nor notable. But what makes Let's Meat Adam feel so jarring is that it pretends it's oblivious, then dives into a surprisingly penetrative (ahem) moment of self-awareness... only to emerge blissfully oblivious again, with zero lessons learned.

Maybe a much more generous reading of this game would argue that this is all on purpose, to function as a sophisticated inverse agit-prop maneuver about how even a murderous queer social justice conspiracy can't change gay white men.

I don't believe in the gymnastics required for that interpretation, but I still recommend playing Let's Meat Adam if you're interested in sex games with politics, and I still want to commend the author for attempting to unpack a complicated issue in an unusual experimental way, even if I'm not quite sure it gets there in the end.
at 11:02 AM
Email ThisBlogThis!Share to TwitterShare to FacebookShare to Pinterest