For all our US-based readers 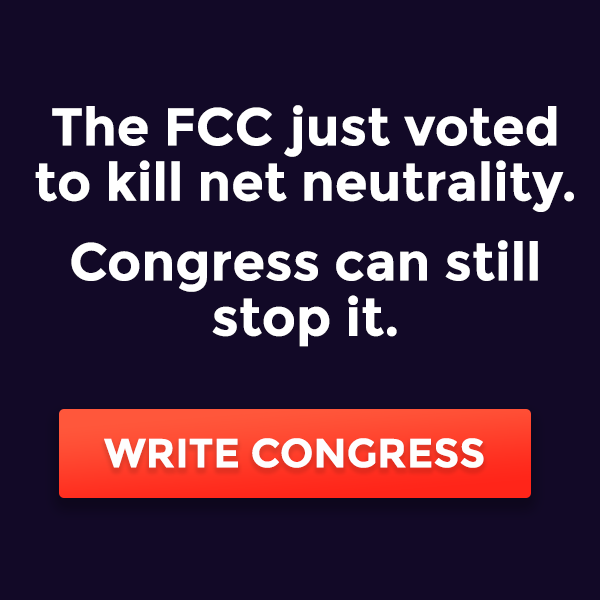 Net neutrality is an issue that would heavily affect this blog and its proprietor. As someone whose "controversial" work regularly gets banned from platforms like Twitch, I'm really worried about the future of open and equal access on the internet when universally-reviled ISPs are allowed to further control who sees what / and at what additional costs.

If you're a US citizen and you like all the shit I post, then please ensure your continued access to my shit, and send some e-mails or make some calls to your local congressperson.

Below, I've copy and pasted from this post on why net neutrality matters, and what is happening now, and what action you can take:

Two years ago, we breathed a collective sigh of relief when the Federal Communications Commission (FCC) passed the Open Internet Order—regulations allowing people to freely access and interact with information online, and protecting them from potential discriminatory practices by internet service providers.

In 2016, the Court of Appeals for the District of Columbia, also known as the D.C. Circuit, gave us additional comfort when it upheld the regulations despite a challenge from the telecommunications industry.
Unfortunately, things change. Now an effort to repeal the order is underway, and we’re asking our community to once again help us protect net neutrality and rally behind a free and open internet.

Earlier this year, FCC chairperson Ajit Pai expressed his intentions to get rid of the 2015 order. We wrote about this in July and joined more than one thousand companies urging the commissioner to reconsider. Despite widespread outcry from individuals and organizations alike, last week Pai made good on his intentions and released his proposal.

In response, Pai’s colleague Commissioner Mignon Clyburn released a fact sheet explaining the proposal while Commissioner Jessica Rosenworcel penned an op-ed urging the public to “make a ruckus” and essentially save the FCC from itself.

Net neutrality is an issue that transcends party lines. A recent Morning Consult and Politico Poll indicated that Republican and Democratic support for net neutrality rules is essentially the same, differing only by a couple of percentage points.

Net neutrality gives developers the freedom to build and ship software without being potentially blocked, throttled, or tolled by internet service providers. The result has been vast opportunity for developers. It's crucial that public policy support expands the opportunity to participate in the software revolution. Undermining net neutrality at a time of concern about consolidation and inequality is precisely the wrong move—directly harmful to developers’ ability to launch new products and eroding trust that the internet is a force for innovation and opportunity.

On December 14, the FCC will vote on Pai’s proposal—and it’s expected to pass. Supporters of net neutrality are already gearing up for another court battle. In the meantime, the U.S. Congress could attempt a legislative fix.

As this discussion evolves and net neutrality is continuously challenged, it’s important that your congressperson knows where you stand. Let them know that you’re energized and that you continue to stand in solidarity with the majority of people who support robust, net neutrality protection.

Call your U.S. congressperson today and urge them to oppose efforts to roll back net neutrality.

Thanks for your time. We now return to our regularly scheduled programming...