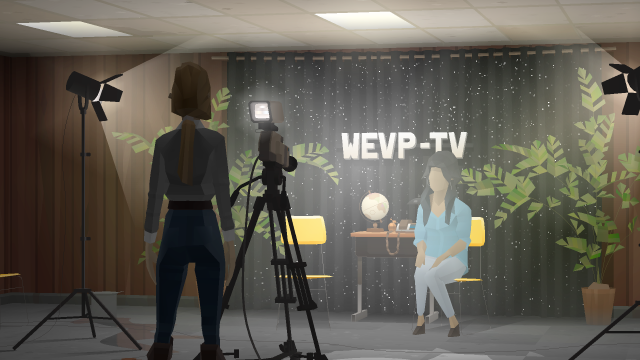 A lot of transmedia narratives tend to focus on modern computing or the internet... but here, we're asked to imagine a vast archeaology of decaying technology. The iconic KRZ flat vector style evokes an era of older VGA games like Another World, the live action WEVP-TV broadcasts are styled as low resolution transfers from analog tapes, and I believe even the real functioning phone hotline seems to have extra static layered onto the voice recordings. Which is absurd, landlines used to be a vital communication technology... but to a filthy millennial like me, now it's just a salvaged material for making art. (As I dialed the phone number, I thought to myself, "how fun and quaint to dial a phone number on my phone!") 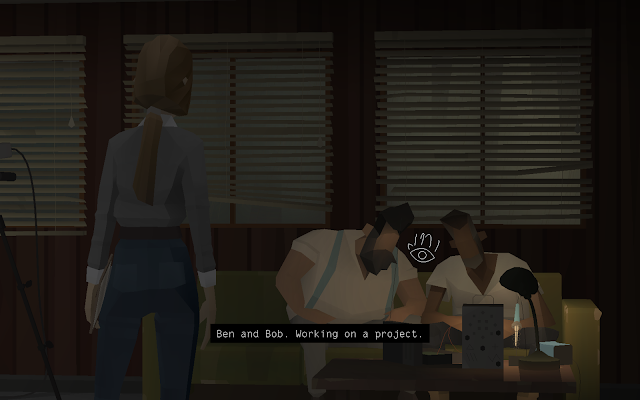 For long-time KRZ players, Un Pueblo De Nada is particularly tragic. It features three frequent KRZ characters, Emily, Ben, and Bob, who have appeared in every installment of KRZ (even the interludes like Limits and Demonstrations or The Entertainment)... and it essentially kills them off with a thunderous flood at the end. In KRZ, we're briefly told the entire WEVP station had been wiped away in a flood, as a sort of throwaway backstory thread, and now we finally get to witness the moment.

Of course, this means that every time we've seen Emily, Ben, and Bob throughout KRZ, then they've definitely been ghosts who died senseless deaths, and they've already been dead for a long while. I used to think each of their musical climaxes represented a sort of melancholy reflection / commentary on in-game events, but now it feels more like a foreboding sense of doom.

Before she was part of a ghostly chorus, Emily was just a local volunteer TV producer / archivist who feels overwhelmed by the precarity of their whole situation. The roof is leaking; the tapes are constantly lost and disorganized; no one else seems to care enough to really help her make everything work. I felt like her (off-screen) death ends up being a bit of a release for her, out of this impossible and stressful situation. 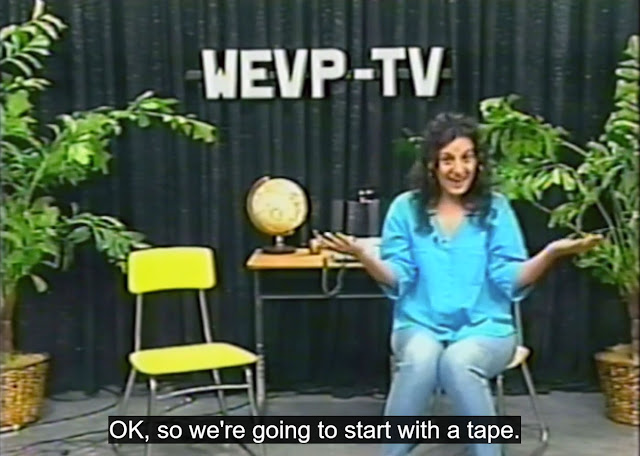 Un Pueblo De Nada means "town of nothing" or alternatively it could refer to a "people of nothing" ("pueblo" can also loosely refer to a particular group of people who live in a pueblo) -- or "pueblo" can be understood in the sense of Pueblo architecture from the Southwestern US. Either way, there's a sense of space and community, of a people and culture being wiped out and reduced to nothing.

Un Pueblo De Nada is also a short film within the short film, the documentary produced by the WEVP-TV host Rita. (You may remember her from previous WEVP-TV broadcast Night Noise / Static Between Stations.) She introduces the segment with several disclaimers about how old it is, how it's OK that the local video art culture is dying out, and how she's totally over it and everything:


RITA: This is an old one, it's one of my mine, but maybe you haven't seen it -- or if you've seen it, maybe it's been a while, so you've forgotten. This is one I made several years ago, back when I was really into history -- local history... the history of this place... here. So, in it, I share some of my research and some of my thoughts about some people that lived here a long time ago -- but before the company, before the airstrip, like over a hundred years ago. OK? So I hope you enjoy it... Ready, Emily? 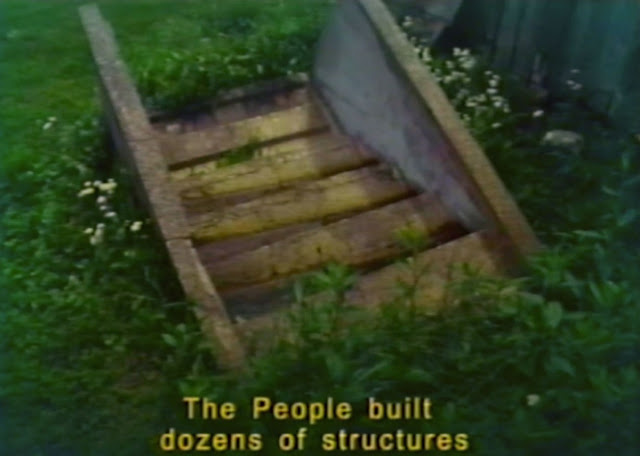 The documentary consists of several photo slides of some woods, an old ruined wood shack, as well as a handsome cat. Historical information is narrated in somewhat stiff-sounding (?) Spanish (presumably by Rita?) with old school yellow-y English subtitles at the bottom.


NARRATOR: The "People of Nothing" arrived by horseback in October, and their first experiment was to free the horses.

They had come from Florida. Before that, somewhere in Central America. But none of the particular people who arrived here had ever themselves lived in Central America. The community had reconstructed itself, person-by-person, in the intervening years. The People built dozens of structures in their time here. The only one of those structures still standing is what we call the Video Databank, which they built as a library. Even that building has been extensively modified and repaired. Probably none of the structure now is original. The only structures the People built were all torn down and recycled during their time here.

The only reason we know about those structures or anything else about the People is because of the exhaustive notes they recorded, sealed and preserved in the library. This was their creed: "everything is an experiment." They were a scientific community. They believed that human behaviors -- physical, social, psychological, emotional, spiritual -- all these behaviors were phenomena that could be shaped by their environment. They changed their environment, observed the effects on their behavior, then made more changes, and so on, experimentally.

So all they kept were notes. They had to be willing to let go of anything, at any moment, either because their data supported a change in their environment, or just to see what would happen.

We don't know what their final experiment was, the one that undid them, because nobody was left to take notes. It was more likely a moral catastrophe than any failure of health or safety. If they had experimented with a new recipe, or a new structure, and it had poisoned or buried them, surely one of those scientists would have scrawled out some record just before dying, so firm was their commitment to the process. No, it must have been something that undermined their faith in the project, completely. 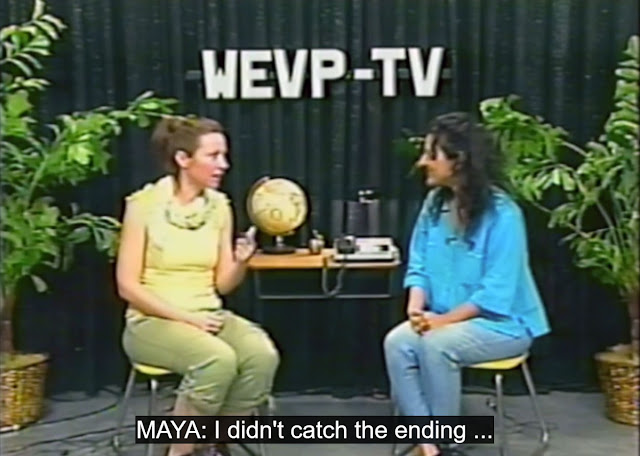 The story is clearly an oblique response to whiners like me, who've been lamenting about how much darker and sadder that Kentucky Route Zero has become, especially in Act IV -- traditionally the site of a "falling action" in a classical tragedy. Cardboard Computer has two characters Maya and Rita comment on the story afterwards, and drive the point home:


MAYA: Uh, I didn't catch the ending. What happened to them?

MAYA: Oh, well, no I don't think so... In fact, I think it's rather common. When a society collapses, everything gets very muddled, I think. Nobody remembers to write everything down.

MAYA: Or, historically, I think, they might've been conquered? Conquerers don't usually preserve their subjects' records.

MAYA: Well, do you think it's sad?

MAYA: Why do you think so? 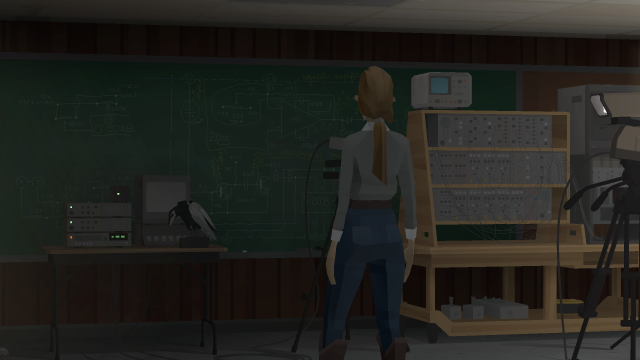 What ups the stakes here is that the Video Databank is clearly a reference to the Art Institute video archive of the same name, which no doubt provided a lot of source material for many WEVP-TV segments. Even the actor for the radio caller Geoff, Drew Ackerman, runs an actual podcast called Sleep With Me where he tells long rambling stories intended to put you to sleep. In general, KRZ has a rich tradition of real-life referents and inspirations.

Are all these artistic traditions doomed to return to dust? Should we all just make peace with how we're all going to die and be forgotten?... Oh, I don't know. I'm sentimental.

RECENTLY RELATED: On wikipedia-ing games culture and history.
at 12:14 PM
Email ThisBlogThis!Share to TwitterShare to FacebookShare to Pinterest