My gay Australian football game "Ruck Me" and its inspirations

I'll be premiering a new game "Ruck Me" on Thursday, August 9th at 6 PM at Bar SK. As per usual, I'll eventually publish a more thorough artist statement that spoils the game's systems and imagery, but for now I'd like to talk about its general themes and inspirations.

Ruck Me is a game installation specially made for Bar SK in Melbourne, Australia for the Artworld Videogames event series. Because it's designed specially for this installation, Ruck Me will never be made available for download (because it simply wouldn't work without the right setup)... so if you want to play it then I guess you better go visit Bar SK!

For this commission, I wanted to do something site-specific that accounts for the local Smith Street / Collingwood neighborhood around Bar SK, while also stepping out of my comfort zone and trying something new.

To that end, I've made a homoerotic Aussie rules football league (AFL) game which makes heavy use of video footage starring the local Collingwood club, to be played using a custom-made blow-up doll alt-controller by Louis Roots (designer and Bar SK proprietor). 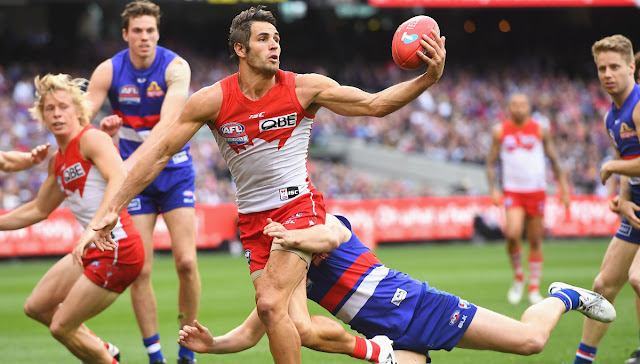 The original concept was to make a gay rugby game, sort of as an homage to the local gay rugby club in New York City -- but then I was told Melbourne was much more of an AFL town, so I changed the theme to Aussie rules instead.

I wanted to make a project that I couldn't have executed anywhere else. An AFL game wouldn't make sense outside of Australia, mostly because no one outside of Australia watches AFL. It's pretty much unknown in North America, and up until 3 months ago, I didn't even know what AFL was. So it was perfect for my needs.

(If you're one of the approximately 7.3 billion people on Earth who don't know how Aussie rules works, here's my mostly-accurate attempt at explaining: (a) 2 teams of 18 players kick the ball across an oval field and try to get it into their goal, (b) if you catch a long-enough kick (a "mark") then play stops and you basically get a free kick, (c) a goal is 6 points, a near-missed goal (a "behind") is 1 point. Anyway this Deadspin AFL guide is helpful and explains it better than me.)

But now I'm grateful to know so much about the AFL, and I guess I've become a bit of a fan. Because this project relies so much on video footage, I've now watched several complete matches, I now have a favorite player (Alex Fasolo is basically the most beautiful man in the AFL), and I can generally follow the flow of an AFL telecast without too many problems. 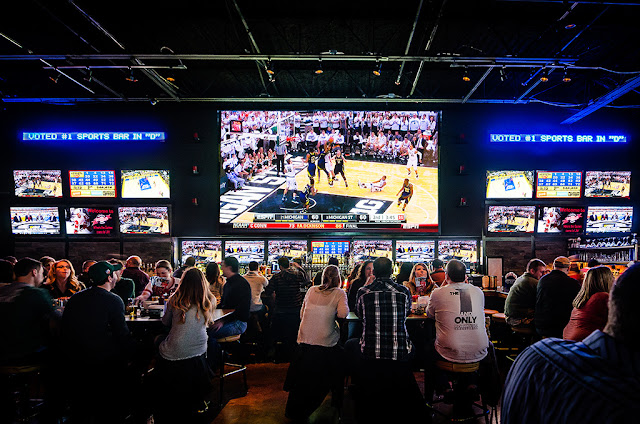 Why do people go to sports bars? It's nice to have someone else prepare food and drink for you, sure, and yeah no self-respecting millennial pays for those expensive sports channels subscriptions anymore, and gosh those televisions are oh so large.

But there's also a fantastic social phenomenological aspect to it -- when everyone in the room notices the same tension in a close match, when everyone witnesses a buzzer beater and erupts in the same shock and awe. I explored some of these ideas in my 2018 Nordic Game Jam game "Marathon", but here it has really crystallized for me. The most important aspect of a sport is its culture of spectatorship. 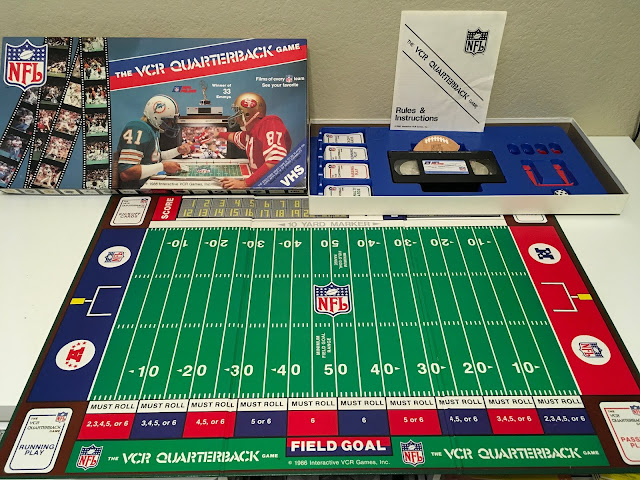 Watching is a form of playing. That's the core premise of the now-defunct genre of VCR board games, which were somewhat popular in the US during the 1980s and early 1990s. The home video revolution was in full swing, and sports video games were still highly abstracted pixelated figures that could not yet provide the fidelity or feel of a telecast. What better way to show-off your brand new VHS VCR than to watch your favorite sports highlights on-demand, whenever you want?

The most famous of these VCR-based games, VCR Quarterback, had two opposing players take turns drawing cards and rolling dice to gain yardage, and then if you gained enough yards then you would score a touchdown.

Sometimes, these cards tell you to consult the tape -- at which point you would dutifully un-pause the tape and watch the brief highlight clip. At the end of each clip, the screen narrates the game outcome in big fuzzy yellow sans-serif text: "0 yard gain" or maybe "10 yard gain", etc. In this way, the video acts as just another card deck or dice roll, randomly displaying an outcome.

By most game design standards, this is a boring game with random outcomes, the systemic equivalent of jock Candyland. However, judged by cultural standards, I think VCR Quarterback is fascinating because it represents a technological shift in how sports are broadcast, presented, and understood by the spectator.

The athletes' performance in a single match is no longer the core experience and narrative of the sport. Instead, it's just raw material to be recorded and reconstructed for various media properties. The in-person live experience of going to the stadium is now a relatively rare luxury bookended by nightmare traffic in the parking lot... and TV, video, and Madden / 2K / FIFA are now the dominant lens for consuming these sports.

Ruck Me tries to meld this tradition with contemporary sensibilities, to make what's essentially a more complicated VCR Quarterback style game, except for the AFL instead of the NFL. It also tries to fuck with this tradition.

In general, mens' professional sports are still understood as widely homophobic and inhospitable for gay men. Across every major spectator sport, there still has not been the equivalent of a virtuoso "gay Michael Jordan" player coming out as openly gay while still active in the league. NBA veteran John Amaechi retired for several years before coming out in his book, and former NFL rookie prospect Michael Sam's breakdown is remembered as a cautionary tale. Gay jock porn represents the fantasy of a sports culture finally free of homophobia, when skilled players won't wait until retirement, and newly-out draft picks won't suffer so much mental illness that they quit the sport altogether.

I'm told that the AFL has still proven especially reluctant to embracing gay men, which bewilders me. Have you seen their little fucking uniforms? Small tight cut-offs with colorful graphic design, worn (and torn) by burly players grappling each other? This is one of the gayest sports I've ever seen. If they embraced a gay audience, they would literally take over the entire world.

So if we combine all these influences: on August 9, hopefully we'll have a bunch of distracted drunk people cheering for instant replays and public performances of homoeroticism? I guess we'll see...