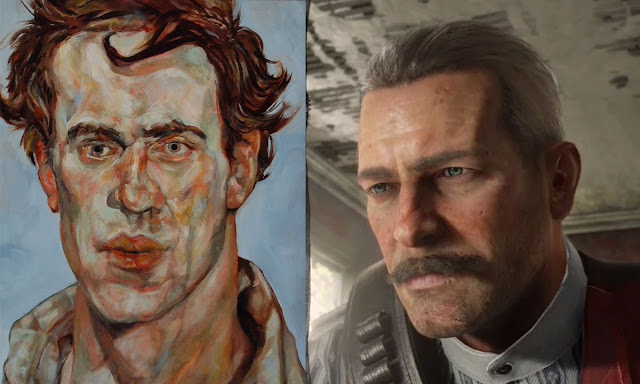 In Dublin, I visited the Lucian Freud Project at IMMA.

If you're not familiar with painters (who is these days?) Lucian Freud is often held up as one of the greatest realist painters in the 20th century. And like many other artist men of the 20th century, his work also has a lot of racist and sexist baggage to deal with.

The IMMA curators figured out a pretty clever solution here -- they basically surrounded his stuff with women artists and intersectional feminist political theory. Instead of pretending to be a "neutral" celebration of a Great Male Painter, the curators did their job, and made an argument for real interpretation and criticism in the 21st century. It felt responsible and complicated. 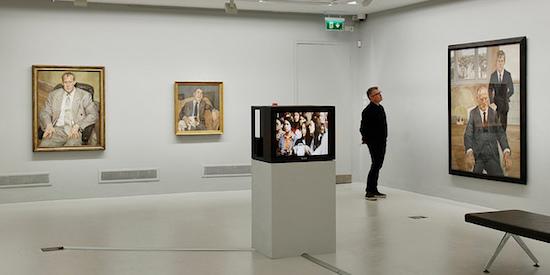 The main basement gallery has two monitors in the middle of the room, running constant loops of John Berger's iconic feminist media studies primer Ways of Seeing. Specifically, it's Ways of Seeing episode 2, the one about the difference between nudity and nakedness, especially within the long history of European oil paintings depicting nude/naked women.

The second half of the episode is famous: the male narrator and host (Berger) shuts up and just listens to a panel of women critique patriarchy and art through their own experience. At first it seems like they're talking about the art shown in the film 30 years ago, but in the style of the Frankfurt School, they might as well be critiquing Freud's many paintings hanging on the walls today.

If you want to read more about the various artists and works, this Quietus post by Cathy Wade is a through walkthrough of it all. In this post, I'm just going to talk about one of the paintings and how I relate its form and politics to games:

For some reason, I gravitated towards a small painting hanging in the corner, a portrait simply called "Kai". 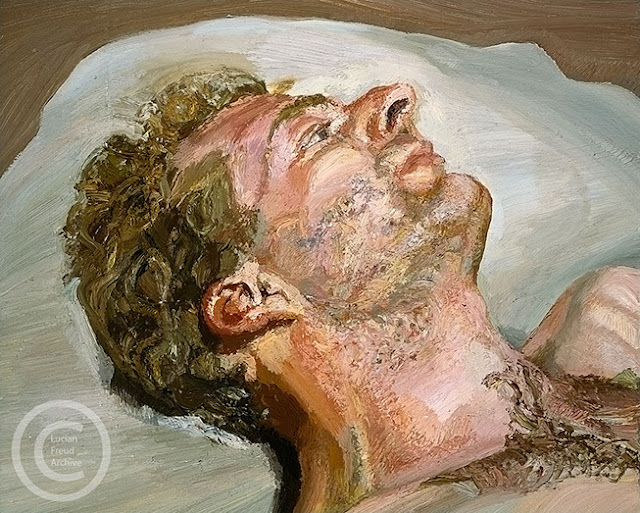 Many of Freud's paintings have much more impersonal titles, like "Head of an Irishman" or "The Painter's Mother" -- but here, "Kai" is a pretty intimate portrait of Freud's (adult) stepson Kai Boyt reclining on a sheet, presumably while nude. (Most of Freud's work consists of nudes.)

The photo also doesn't really do justice for the painting. If you actually go and see it in Dublin (you have until 2021, when the exhibition closes) then you'll notice how the shoulders and hair feel softer, how the stubble looks scratchier, and how the chest hair seems more calculated in-person. This is both the most obvious and most subtle aspect of Freud's paintings: the richness of the skin and the texture on the body. The paint strokes are heavily layered and remain unblended, so the different tones and complexion create a thick mosaic of ruddiness, with all these mottled colors and surface details. If you put this painting in a 3D video game, you'd definitely need a normal map.

It goes against the prevailing trend in portrait photography, to insta-smooth every wrinkle and to photoshop every blemish into oblivion. Today we recognize smooth flat skin is unrealistic, while "detailed" skin is authentic and real.

But of course, those politics aren't evenly distributed in society. Women and femmes everywhere are expected to spend hours every day on makeup / skincare routines, and many find enjoyment and satisfaction in it, but that doesn't mean it still isn't socially-mandated work. Meanwhile, men can literally wash their face with dish soap with startlingly few consequences. Skin is made of labor, and different people do different work.

"I want paint to work as flesh, I know my idea of portraiture came from dissatisfaction with portraits that resembled people. I would wish my portraits to be of the people, not like them. Not having to look at the sitter, being them. As far as I am concerned, the paint is the person. I want it to work for me just as the flesh does."

Again, if a flat smooth complexion feels fake and uncanny, then the opposite will read as authentic and real. Thick paint is a more honest material than a photograph; a photograph might have depth, but it never has thickness.

To convey its expense and escalate its perceived production costs, AAA artists now push their materials and paint thick skins with many layers. Many of our top video games now have us roleplay as a generation of video game action-dads who shun moisturizer. We adopt cyborg faces that morph into chiseled hams, all ruddy and fuzzy, with pores the size of pancakes.

Through all their layers of shaders and texture maps, these masculine bodies feel accumulated, built-up, and thick (but often stop short of thicc, unfortunately).

Every texture map (albedo, cavity, normal, detail normal, translucency, roughness, scatter, fuzz, weight map...) and every shader pass and lighting mode (diffuse, specular, screenspace subsurface scattering, phong fresnel, bent normals) is like another layer of paint, another rendering pass or GPU instruction, another layer of labor that pushes this style beyond my amateur skills and resources, and towards an impossible beauty standard for video games.

Freud too was both admired and hated for his relationship to labor. He famously made his models sit for hundreds of hours. He insisted on not working from photo reference, he had to work straight from the source. His brand of realism required repetition and habit and time and work. Similarly, nearly every face in Red Dead Redemption 2 was meticulously scanned, re-topo'd, painted, weighted, rigged, recorded, animated, lipsynced, lit, and scripted, by at least dozens if not hundreds if not thousands of people around the world.

This is just one way we can understand the materiality of thick skin in video games: as the accumulation of labor, systems, and behaviors. When I play these games, it's fun to roleplay as a cowboy, but I'm mostly roleplaying as an industrial game developer in awe of the scope -- or maybe I'm playing as a curator, thinking about all the politics and theory embedded within the game materials. If video game skin feels like flesh, it's because it's made of people.
at 4:04 PM
Email ThisBlogThis!Share to TwitterShare to FacebookShare to Pinterest