new Quake map: "Smell It In The Street" 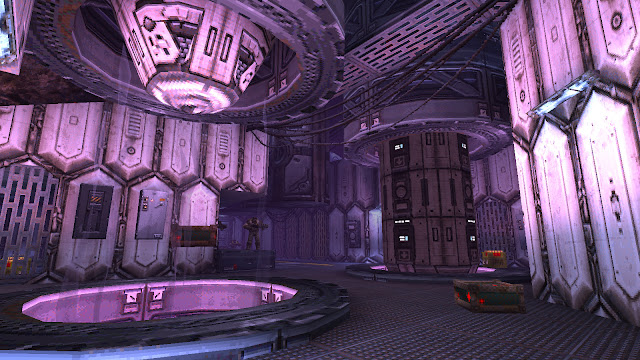 I made another Quake map! This one is called "Smell It In The Street" and it was made for the Doom Tintin map jam, a level design jam centered around using Quake mapping community member Tintin's texture pack that samples from Doom 3 textures.
Some brief level design thoughts follow:
This one is a lot more traditional than my previous Quake levels that focused on modernist architecture. For this one, I built a kinda generic video gamey sci-fi facility in a cave, but I still wanted to add my own twist on the formula. I knew I had to make heavy use of neon color since I hate the typical brown beige Quake color palette, but my early texture tests with the purple wall variants were a bit disappointing. The deep saturated midtones of the Quake purple palette leave very little wiggle room for contrast or color variation, so instead I decided on a fairly bright monochrome texture palette where I'd push the colors with neon lighting instead. I also wanted to lean on the textures that would get less use by other mappers -- namely, this beautifully creamy hexagonal panel wall.
The main arena is centered around these big murky purple vats of liquid (see above). It's my variation on the typical arena pattern in Quake, where usually you just build a big room and put some pillars in the middle to circle-strafe around. Except in my version, big phallic pistons repeatedly thrust up and down into the pools!... which also aren't really pools, the player can secretly fall through them and land in the basement arena below. For experienced players, this is a convenient escape hatch once they realize they can jump down for some health and take a rest, in case the action gets too hot upstairs. I'm particularly proud of the giant three-pronged sci-fi candelabra on the ceiling that began as a way to block the player from jumping easily from cylinder to cylinder, but then eventually just tied the room together. 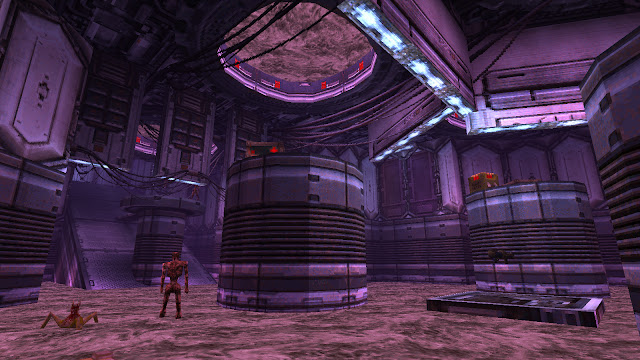 In terms of critical path and player flow, I structured the whole map a bit like a multiplayer arena map that the player gradually unlocks and opens up. This is the same flow I learned from playing modern 2010s Quake community maps (especially the excellent Underdark Overbright) that remind me of first gen 2.5D FPS level design, like Doom and Marathon: massive complex interconnected floorplans. Honestly some of the late Doom and Marathon levels were probably way too big and way too much. The sweet spot is probably like ~31% of one of those massive levels, so basically like a Thief level, but with fewer hallways. But despite my moderate stance I still feel myself turning into that guy: I now honestly feel that action FPS design basically peaked in the 90s.
Plus it's all so much more fun to build with modern BSP construction tools like Trenchbroom. It lets me focus on that layout design feeling, when I figure out how to resolve the connection between two rooms or height levels, and I imagine it's definitely the closest that level design ever got to actual architecture: chasing the high of untangling these spatial problems, gazing at the completed sudoku that is your map. And gosh it's so liberating to build these maps in 2020, when I give absolutely zero fucks about optimization and VIS blockers, and final quality map compiles take a few dozen seconds at most. It's easy to build huge open cavernous maps with the confidence that it'll still run on basically any computer. 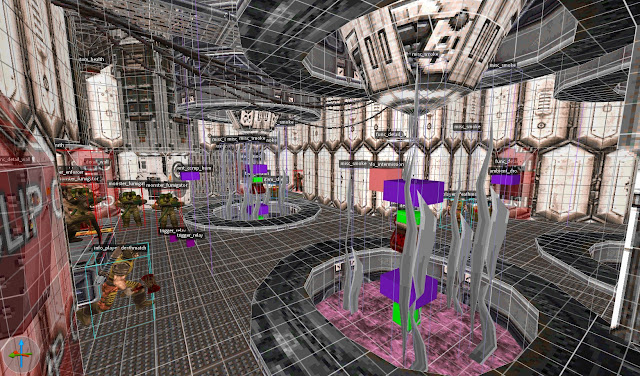 I've also been trying to square all this with my current playthrough of Black Mesa, with the highs of its spatial design (and the lows of its unfortunate combat gameplay regressions). I think that dissatisfaction has given me the level design itch again.
Maybe I should build an indie FPS game sometime? But I don't want to build an "indie retro FPS" Quake-like. There are so many already. For me it's more about the abstract level design qualities that benefit retro shooting aesthetics, rather than the retro shooting itself.
Imagine the sunny colorful realism of Half-Life paired with Quake's famously crunchy movement physics and use of space... but if I'm going to skip over the last 20 years of shooter design, I'd still want to embrace the last 10 years of indie design: a more forgiving Devil Daggers that meets a more forgiving Dear Esther, wrapped in the allegory of Umurangi Generation? Now if only someone would pay me to build that. 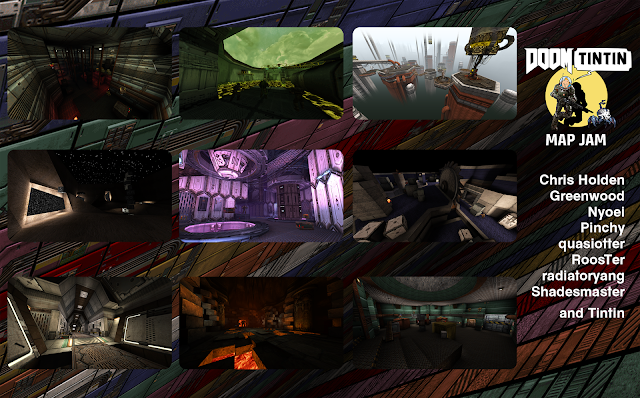 In the meantime, you can try out the full map pack here.

Unfortunately there's still no good convenient way to play Quake mods. Check out this guide for info on how to get setup. Other than the map pack mod, you'll need to download two other things:

Then once you download and install everything, you'll need to make a shortcut that targets something like quakespasm.exe -game dtintin
at 3:35 PM
Email ThisBlogThis!Share to TwitterShare to FacebookShare to Pinterest