new Quake map: "When There Were Wolves" 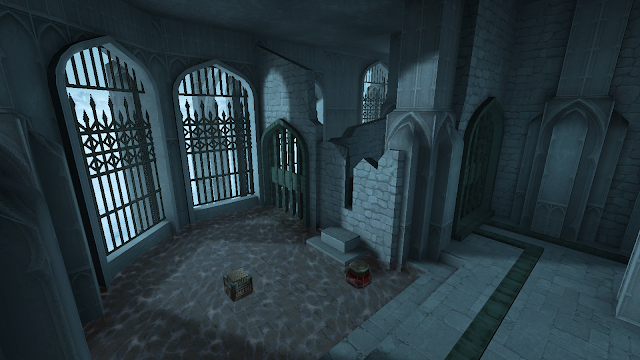 I made another Quake map, this time in collaboration with fellow mapper @mrtaufner for the 2021 Quake community Xmas Jam.

Taufner handled the initial blockout and gameplay, while I did the art pass and tweaks. (With textures by Makkon as usual.)

The collaboration here was ideal because I didn't feel like doing gameplay stuff, and Taufner didn't want to art pass, so we exchanged duties and took turns working on the level.

This is pretty small for an entire level -- in real world terms, 80x80 feet is a bit smaller than a baseball diamond, and in Quake terms it's about the size of a big arena or two. It's a helpful scoping constraint to force everyone to make something small, and thus actually finish something at the end of the year.

The size constraint also pushes level designers to use space efficiently and creatively, which implies two design strategies: you can either (A) try to cram a bunch of different rooms that fit around each other, or (B) make one big complicated room that you repopulate and reconfigure multiple times.

Taufner chose approach A, so one of my main goals for the art pass was to try to get all these small rooms to feel less cramped while preserving the original player flow. Building off of Taufner's solid blockout, I knocked holes in a lot of walls and ceilings to try to unify the rooms and give more breathing room, while ensuring they still played in roughly the same way. 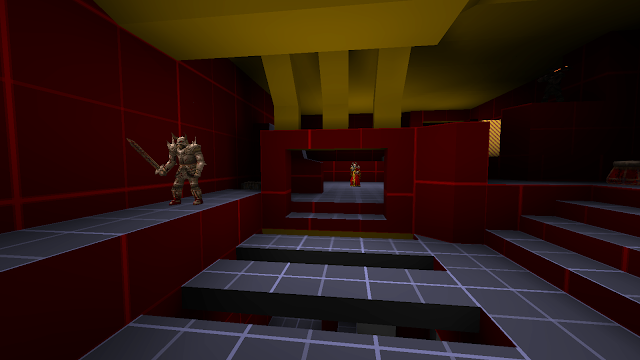 My art pass also needed to punctuate Taufner's progression. The blockout has 4 beats:

4. Roof climax, combine everything in a big open arena -- buttons, barricades, breakables -- all in one big outdoor 1024x1024 arena with 4 player-initiated waves featuring all the monster types from past fights. 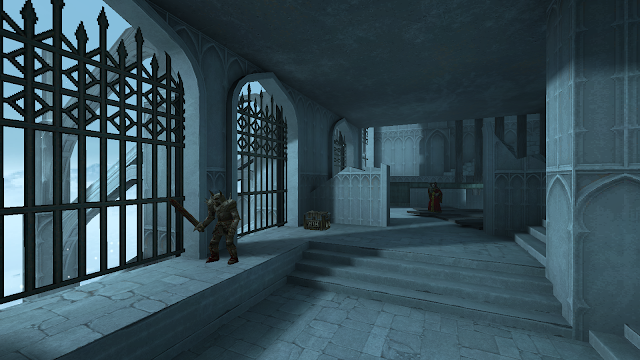 I repurposed a lot of theming from one of my half-finished unreleased SMEJ Jam map, a snowy gothic stone compound full of flying buttresses and arches (a nod to Dark Souls). Reusing the light and fog settings, skybox, texture scheme, and architectural modules really helped me fit this jam into my schedule. If I hadn't reused stuff, it would've taken me much longer to get everything together.

I also wanted to adapt many of Taufner's sensibilities -- the Combine-like trellis barricade bars were inspired by his original blockout, and I enjoyed the little pool of water in the beginning and even added a second pool later on in the map as a sort of echo. Maybe the biggest functional improvement of the art pass was for the breakable crates; a fair number of blockout playtesters had trouble discerning that they were indeed breakable (breakable objects aren't in vanilla Quake) so I spent a lot of time making sure the final art-passed crates looked detailed, unusual, thin, and full of holes. 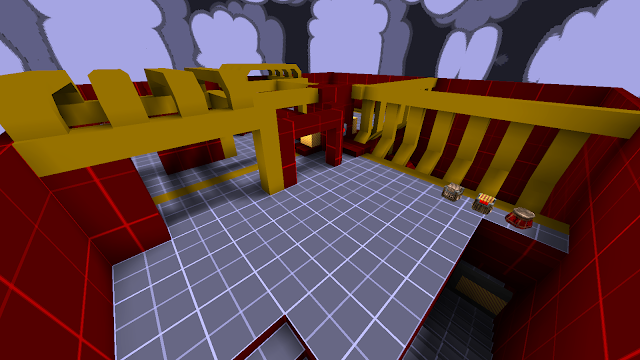 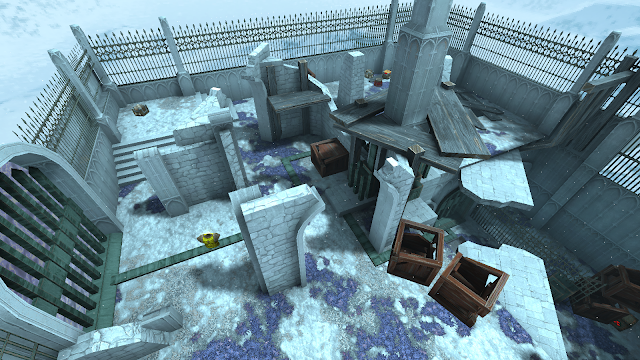 Overall the collab was a success. Taufner got to focus on gameplay and ignore art, while I got to focus on decor and didn't have to run any playtest sessions or tune the battles. We all got what we wanted, and I think the final result plays pretty well. Honestly it's probably not the best or most interesting level in the entire 25 (!) count map pack, but I think it still confidently holds its own and doesn't waste anyone's time.

PS: the title "When There Were Wolves" is from a famous Christmas story by Dylan Thomas called "A Child's Christmas in Wales." The full sentence is a doozy: "... Years and years ago, when I was a boy, when there were wolves in Wales, and birds the color of red-flannel petticoats whisked past the harp-shaped hills, when we sang and wallowed all night and day in caves that smelt like Sunday afternoons in damp front farmhouse parlors, and we chased, with the jawbones of deacons, the English and the bears, before the motor car, before the wheel, before the duchess-faced horse, when we rode the daft and happy hills bareback, it snowed and it snowed." 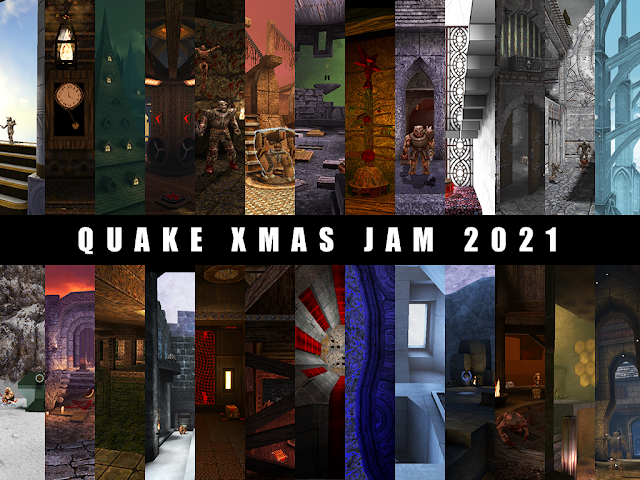 You can play this map, as well as 24 other maps, by downloading the Xmas Jam 2021 map pack. Arcane Dimensions 1.8 is already included, so to install you just have to drop the mod folder in your Quake game folder and then you'll be good to go.

Thanks so much to the Quake Mapping Discord and our brave crew of playtesters, as well as Ionous and Sock for organizing the whole thing, and of course thanks to my collaborator MrTaufner. Happy holidays and happy new year everyone.

at 8:29 PM
Email ThisBlogThis!Share to TwitterShare to FacebookShare to Pinterest