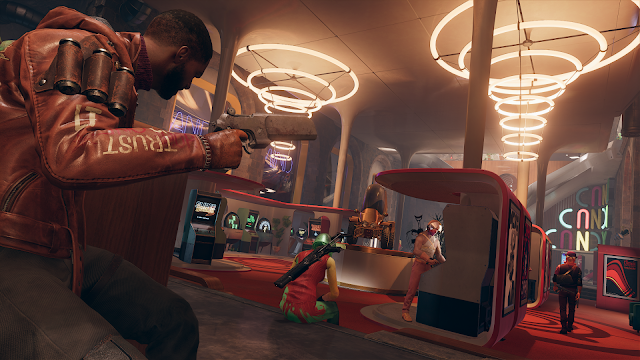 SPOILER WARNING: this post spoils levels, main quests, and gameplay systems in Deathloop
I guess this post is my contribution to Deathloop discourse. This is similar to my tactics games writeup and Enderal (huge Skyrim mod) writeup where I spoil some interesting game designer / systems design things. I don't discuss much of the game narrative. I assume general game design knowledge but minimal Deathloop-specific knowledge. Perfect for pretending to have played Deathloop if you find yourself talking to a game dev. Not that you should ever talk to a game dev.
Just to warn you, this post is 5700+ words with 3 sections: 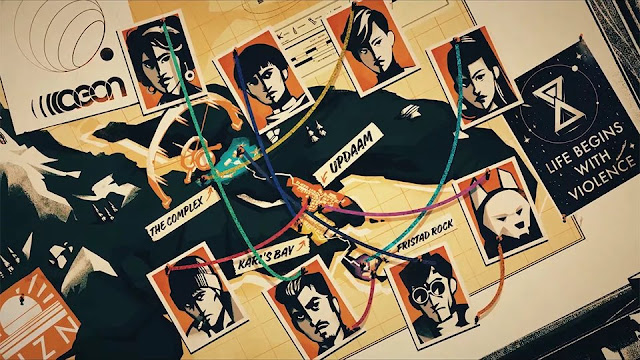 Pillar 1: Dishonored-style assassination single player FPS RPG; sneak in with magic powers, then kill someone / fight your way out / run away 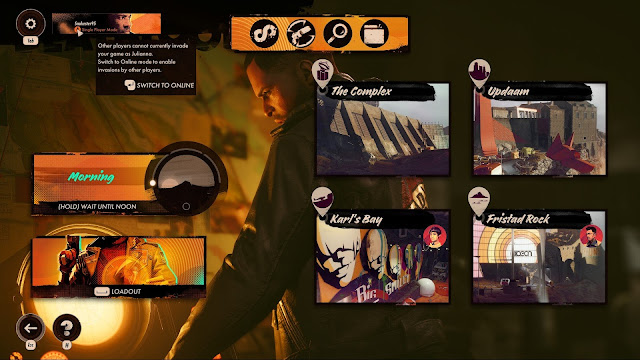 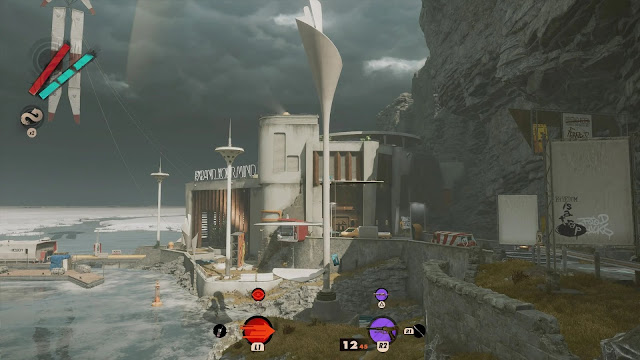 Pillar 3: Dark Souls roguelike; if you die, you lose everything you didn't bank and have to corpse run; there's invasion PvP where people fuck with you 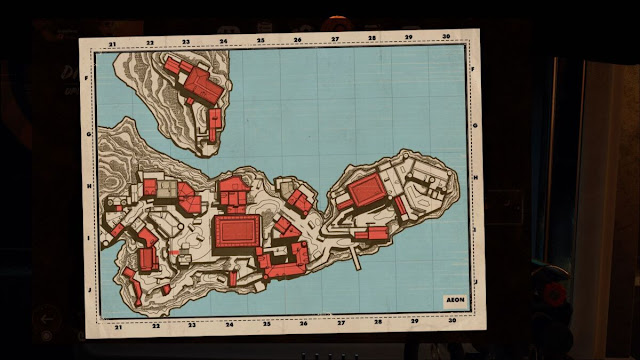 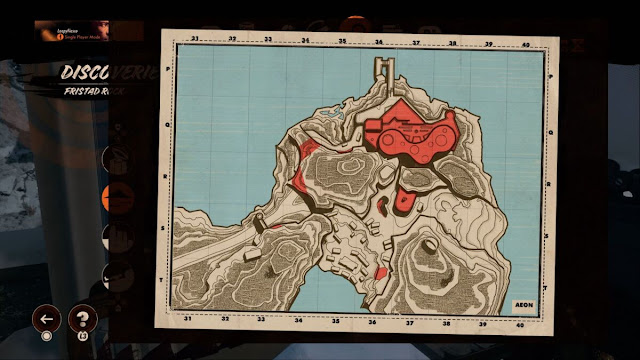 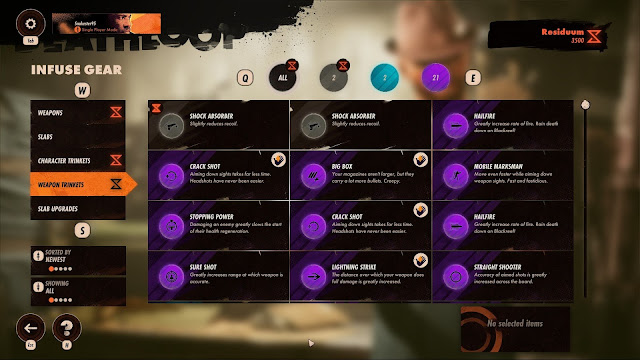 Max ammo capacity feels unusually low for a shooter; it's common to run out of ammo during a fight. I think the intention is to make you scrounge around for ammo during a fight and/or swap weapons more often.
This ties into a common complaint: the melee weapon machete is very powerful, like a 1-3 hit kill (maybe 10-15 hits against a boss?) where the main drawback is you're still vulnerable during the 2 second execution animation. But for a medium mob (4-6 enemies) in a cover-y arena you can just run in and safely slice up everyone.
There's also some secret dynamic difficulty magic going on, but I couldn't really figure it out. The game says killing a boss increases the difficulty ("loop stress") per loop, so at 0 bosses dead the game is easy but at 4 bosses dead it's supposed to be harder. Anecdotally it seemed like:
One last combat note: Sniper-type enemies felt rare, which is surprising for a squaddie ninja shooter. The usual design move here is to make players stealth around to clear the lone unprotected snipers isolated on towers, and/or ninja their way to snipers while juggling an aggro'd mob. But here the main sniper enemy is your nemesis Juliana. 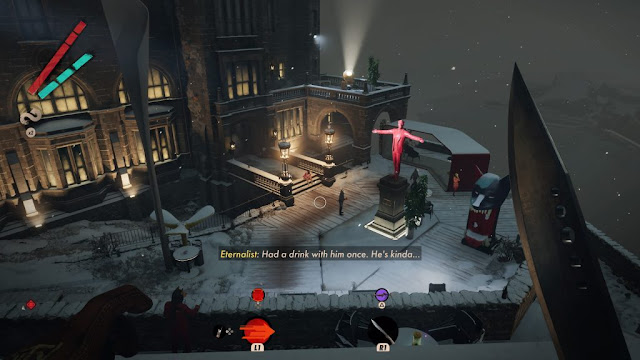 INVASION IMPLEMENTATION
The most risky part of the core design. Imagine a stealth game where a rando player can drop in and fuck up your stealth and alert the entire level. It's a big reason why they had to go hard on high-chaos direction, and why stealth had to get streamlined so much -- if you try to ghost this game, you're going to hate it and feel it's unfair when GokuInMyMouth420 destroys your precious stealth immersion.
Wisely, the game doesn't really explain invasion conditions, and the uncertainty is a lot more interesting (until it isn't). But from what I can tell, here's how it works: 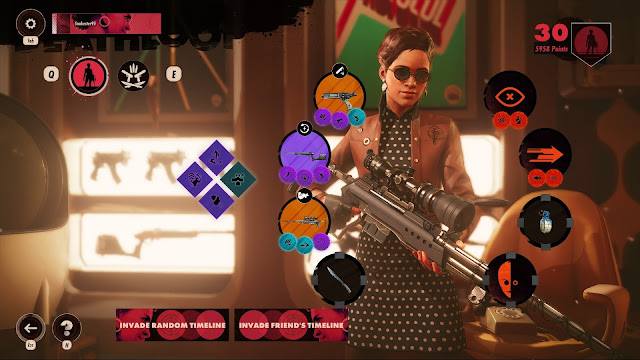 Ok now that we've covered the core game stuff, let's talk about all the complicated schedule design.
I've broken down the major beats of the critical path into "beat sheet" tables. Hopefully it's self-explanatory. Remember the time rules:
TUTORIAL
The tutorial happens across 3 in-game loops. During this time, mission selection is restricted and progression is heavily scripted / controlled.
EARLY GAME, unlock powers and guns, fight bosses one-on-one
Once you finish the tutorial, the game opens up and you can freely choose where to visit and when.
The UI foregrounds the boss fights to you above all, with the pink boss portrait icons.
In the table below, the "..." rows below are the downplayed options, where their usefulness only becomes clear later, if ever.
The Egor sabotage questline is the simplest one, and weirdly, one of the last quests you might start. Perhaps as a result, Egor is one of the least interesting and less developed characters in the game unfortunately. The other game characters don't give a shit about him, and it seems like the player doesn't either. Kind of sad. 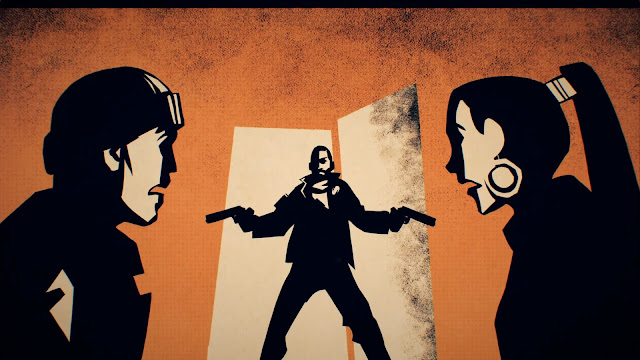 LATE GAME: the most complex quests that involve 3+ days and all 4 locations.
My first instinct was to think, well, these "most complicated quests" aren't actually very complicated? But maybe anything more complicated would've been way too much stuff. 2 simple quests in parallel feels like 1 complicated quest. So I think they got this balance right, even if I whine about it.
The Wenjie party questline works well conceptually because it combines the first boss with the last boss. It's also interesting how it branches out from another questline, and encourages more Charlie / Wenjie / Aleksis runs in a fairly organic way.
The weakest part of the quest is when it makes you to go to the port to open Charlie's safe, hidden inexplicably in a trivia game show room at the port. Feels like a random excuse to make you visit this somewhat neglected level.
Once you complete the quest to upload a fake voice sample to transmit a fake message to Wenjie, you never have to do it again. It feels like a cop-out a little. I assumed it was going to make me use the Transmission Tower at the afternoon-coast to make me do this for every golden loop run, and it felt like a weird loose end when it didn't. (I never found out what the Transmission Tower was for.)

The Power Station questline involves redirecting power in the morning to unlock bunkers later in the day. If you don't unlock all the bunkers all at once in a single loop, then you have to keep going back in future loops to do the power station process over and over. So many hard gates and buttons and back and forth, and the power station feels tedious on a third visit. There's 4 different audio passwords you have to learn?
The pacing is confusing. On one hand, it feels like a flexible side quest you're supposed to fit around your other tasks. But if you do it gradually, it's tedious and locks up your morning.
So then it feels like you're supposed to do it all at once. But if you complete it before your golden loop, then the game kinda tut-tuts you. "This is for the ending! Too early, dummy!"
(Why is a secret 20 year old military rocket plane locked-down unless you kill 7 people? Because video games!)
(I'm assuming Arkane tested the Good Design -- let players fly the rocket prematurely without killing 7 bosses, confront Juliana, only to fail and loop again -- and opted for this hacky clarity rather than systemic consistency. Still... SOMEONE CALL THE IMMERSIVE SIM POLICE) 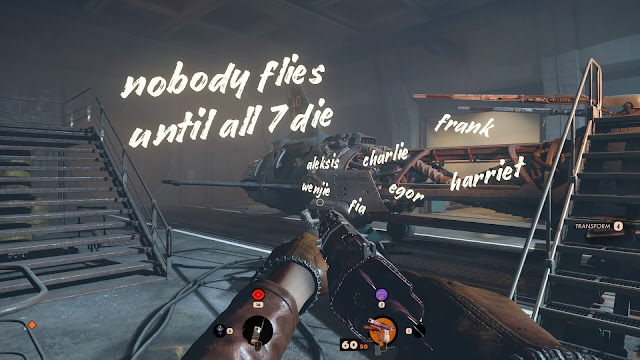 GOLDEN LOOP
Once you've completed all the quests, the game finally enables the golden loop, and even spells out all the required steps in your quest log UI menu.
Which felt like a shame to me. Deathloop couldn't trust the player as much as Outer Wilds. Ultimately you're a baby who couldn't schedule your own life by yourself after all.
I know it's easy for armchair indies like me to complain about pulling punches. I imagine Arkane debated this a lot, and over the years, had to bow to AAA approachability and clarity. Which is understandable, but still, it's a bit of a shame.
But the bigger problem: as a result of other design decisions, the drama of the golden loop isn't really there.
Deathloop's turn-based time makes it much more approachable, but relies on the threat of dying 3 times, rather than time itself. By the end of the game, that threat has disappeared and your build is fun and OP.
So then the golden loop schedule ends up feeling too simple and doable. When I realized what it would be, I thought, "ok, sounds very reasonable." And it was.
(Comparatively, when you realize the Outer Wilds' golden loop schedule, you think "oh my god how the hell am I going to do all that", even though it's actually not that bad on a second try. But the initial shock is crucial.)
The Harriet boss (and her entire character, really) sadly stays the same. The game says you must kill her first, like this, always -- and if she always dies so early, that means her concept doesn't get to interact with anyone else. Not that her concept makes much sense; why does this apocalyptic suicide cult leader like poison gas specifically? Why doesn't her backstory (survived a near-death plane crash) affect anything other than her arena theming? Like the Frank character, she feels like she's made of loose ends. I thought we were going to have to use one of her planes to do something, or pipe her poison gas into someone else's lair, but no, she's pretty one note unfortunately.
The noon and afternoon steps also feel a bit empty and flat to me. It would've felt satisfying (but maybe too cumbersome upon repetition) to make the Wenjie steps more manual instead of automatic: e.g. at noon in the Complex, break into her lab annex and hack her computer system -- then at afternoon in the Coast, send her the fake message from the transmission tower.
Other stuff I thought the golden loop was going to involve / would've been cool to do:
The ending(s) are... abrupt. In particular there's a weirdly "happy" ending that makes no sense for the characters. But oh well, endings are hard.
EXECUTIVE SUMMARY AND LOOSE ENDS
Deathloop is a big beautiful complicated good game that's smartly made, but overall, it's maybe just a bit too safe to be as stunningly brilliant as a Dark Souls or Outer Wilds.
While I think it's just a bit short of brilliant, I still really enjoyed my time with it and look forward to the next Arkane Lyon game and/or Deathloop DLC and/or blockchain battle royale.
at 5:00 PM
Email ThisBlogThis!Share to TwitterShare to FacebookShare to Pinterest