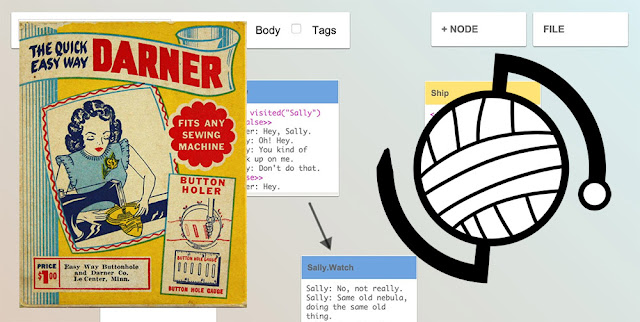 On December 21st, 2021, the Yarn Spinner project finally made its public YS v2.0 for Unity release.

YS 2.0 has gone through six (6!) preview versions / betas over the last few years, with several debates and redesigns that have finally culminated in this version. If you're familiar with Yarn Spinner already, you should go read the changelog for upgrade notes from v1.0 to v2.0.

But a lot about YS and its ecosystem have changed, so it's probably helpful to recap what's going on. 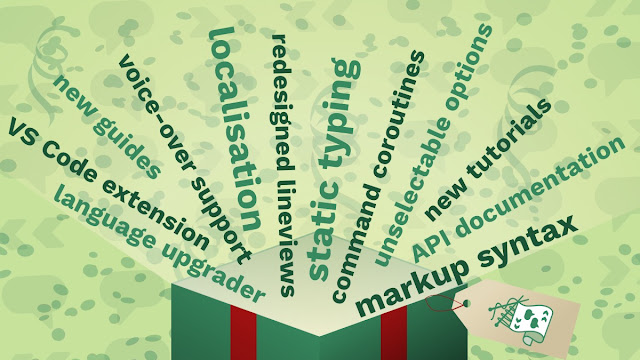 The Yarn Spinner project is made of two main parts, which can be confusing:

Yarn is inspired by Twine. It is meant to be simple and easy for writers:

But it's also meant to be very extensible for game developers:

Some games do all their cutscene scripting and even enemy AI in Yarn Spinner, because really, it's just a simple scripting language that does whatever you tell it to do. Nothing stops you from adding more commands, functions, markup tags, or new ways to process the script. 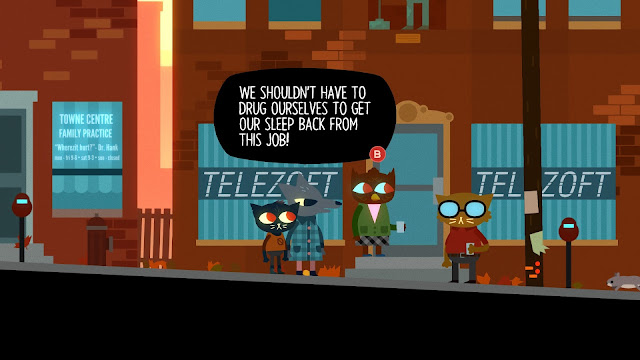 WHEN TO USE YARN SPINNER

The two most famous Yarn Spinner projects are Night In The Woods and A Short Hike. Both of those famous games are very typical video game RPG style things where you walk around a world and talk to NPCs, one at a time. And so this is the ideal use case for Yarn Spinner: action adventure games starring existential millennial animal protagonists.

There are three other common choices for game dialogue in Unity:

Ink is a popular free open source project by Inkle Studios. Their games (80 Days, Heaven's Vault) make heavy use of dynamic text and procedural generation, great for throwing paragraphs of text at the player. If your project goes beyond typical game dev needs, or does lots of experimental stuff with text or proc gen, or dips its toes into interactive fiction, then Ink is probably a better choice.

Fungus is another common free open source project, which prioritizes a visual node workflow and lots of built-in examples. Like any other visual node workflow, it seems nice and convenient at first, but once you have 1000+ words across multiple scripts, this workflow scales poorly and feels cumbersome. It is great for Unity beginners, or for small jams / prototypes with light dialogue requirements. However, it isn't in active development anymore, and maintenance since 2021 will be a bit spotty.

Dialogue System is an all-in-one node-based visual editor in Unity asset with ready-made samples for Mass Effect / Skyrim style dialogues. It seems fine and people have used it successfully (Disco Elysium? really?) but if you do decide to buy it, then (in my opinion) you should avoid the cumbersome visual node editor workflow and rely more on the text file importers.

So to review, here's my advice for Unity devs making games with dialogue:
Q: How do I know if I'm experienced enough with Unity to make good use of YS?
A: Can you imagine 3+ different ways to architect a dialogue system for Unity? Can you name 3+ specific problems with the Unity UI system?
Additionally, for any teams using source control, Yarn and Ink's text formats mean the scripts are easily diff-able and hand-edited. 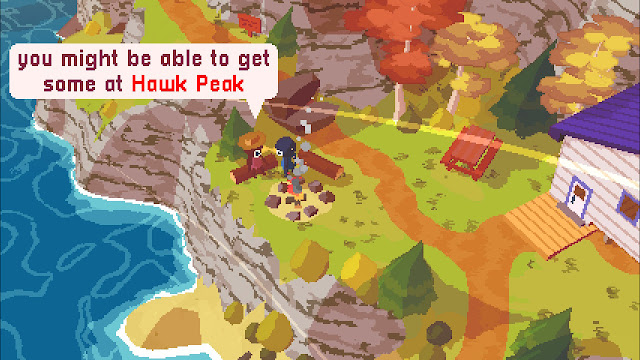 HOW TO USE YARN SPINNER

A lot has changed since Yarn Spinner v1.0. Before I would've recommended my Unity editor plugin Merino, or the semi-official Yarn Editor. However, I've since abandoned my editor, and the semi-official editor feels a bit bloated and slow to me. I wouldn't recommend either anymore.
So my new 2021 recommended Yarn Spinner Unity workflow for writers is now this: Write Yarn dialogue in VS Code. You'll want these two extensions --
VS Code is a solid writing interface: a big textbox that gets out of your way. Add the language server functionality and now writers have built-in autocomplete and help too. 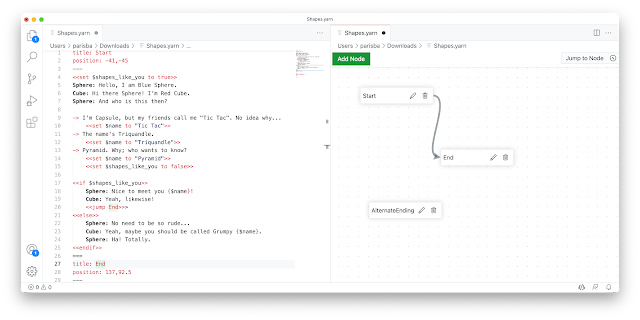 at 7:05 PM
Email ThisBlogThis!Share to TwitterShare to FacebookShare to Pinterest