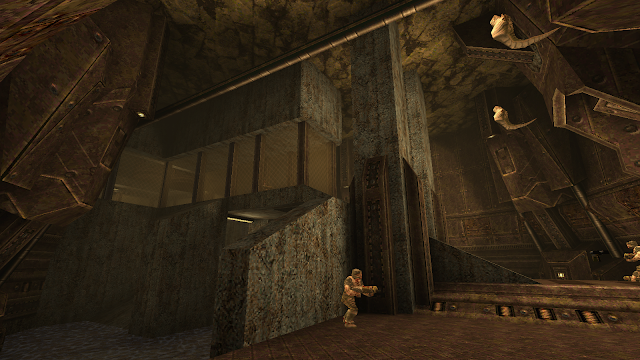 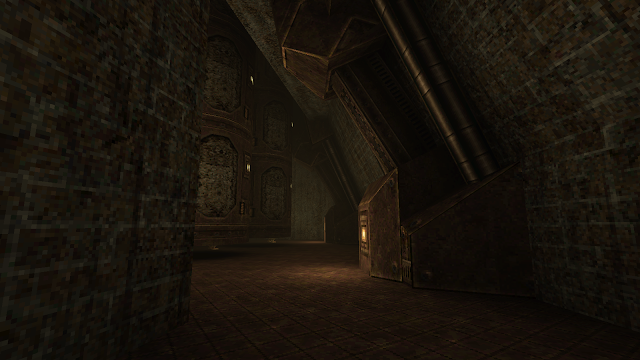 Grunts are the traditional first enemy you encounter in a Quake episode but become challenging in groups or on elevation. The tanky artillery ogres are the best designed enemy type in all of Quake. Lastly, the scrags are great for crowded arenas since they don't need floor space.

Three monster types also lends itself to three arena variations. One with mostly grunts, one with mostly ogres, and one for the scrags. I kept the overall shape the same so I could copy and paste details later, but the middle of each arena has different platforms and cover patterns. Lastly, I leave it to the player to approach the arenas in whatever order they like, though a grunt > scrag > ogre order is probably ideal.

Following a pattern from one of my previous maps "Daughter Drink This Water", each arena gradually unlocks with neighboring arenas after the fight. By the end, the player has a huge compound arena to fight-off a big finale mob. Hopefully the player resisted using the quad damage powerup in the middle until this finale fight, when all the delayed gratification finally pays off, along with a grenade launcher. 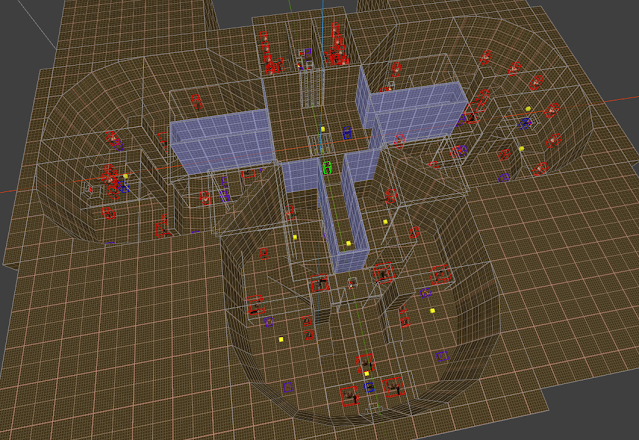 After I got the arenas feeling OK, I woke up the next morning realizing I was falling into a design pattern that I get (softly) criticized for -- I tend to do a lot of "slaughter" style fights with big static mobs and little scripted progression. I think I do this because that's the "most gameplay" for the least effort, and I don't have the patience to test and tweak encounter scripting a lot.

Then I thought, OK, maybe that crit is more about the lack of variety in the level. Slaughters feel better if there's some initial no-slaughter to contrast with it. So I blocked out some simple rooms above the existing arenas, to serve as a short entry puzzle area ("Quake puzzle" = you have to press a button to open a door) with a bit of exploration. I also designed it as a safe lobby gathering area for co-op players, since the map jam uses the mod Copper with its co-op design pillar.

Now the map had two halves, an explore-y approach bit and then a small hub with three arenas. So I needed two visual themes for it to feel like a progression. 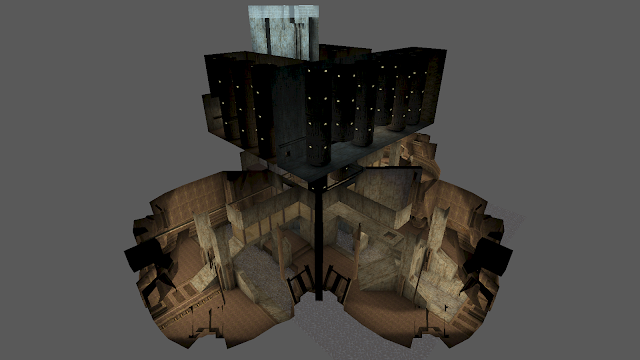 I've usually used Makkon's (excellent) textures for my Quake levels. This was an opportunity to go out of my comfort zone and try a new texture set I had never seen before. "cr8" by Speedy has a very 2000s feel, a gritty industrial theme via 128x128 textures with heavy trims; everything is a murky midtone and will feel dark no matter what.

Then when the player opens the big floor gate and descends into the heart of the level and its three chambers, the visuals transition to more of a rusty sci-fi metal thing with big curvy pillars. The curviness is intended as my reaction to a comment on my previous map "When There Were Wolves", where another mapper Kona pointed out how boxy it was. (I'll show you!!!)

Texturing these machine shapes was a fun challenge made possible by TrenchBroom's excellent UV-like texture alignment interface. I could freely mix, match, and skew different parts for each face. Here I put an emphasis on aligning the bevels and highlights as if I were using Makkon. 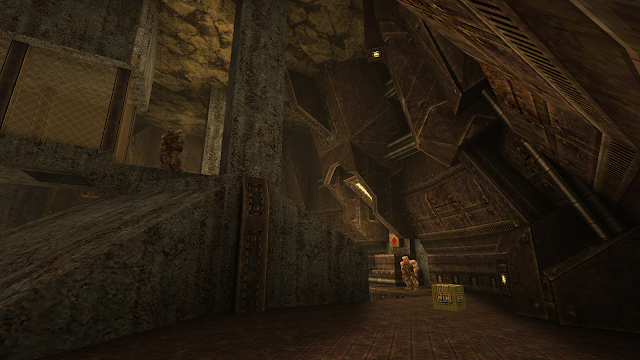 Overall, I think I did a good job for the random time I scraped together across a weekend. I think I scoped it just right, and I wisely invested in some very targeted brushwork that I wantonly copy-and-pasted for some decent art coverage.

You can play this map, along with 17 (!) others, as part of the Quake Speedmap Snack Pack 2 release. Thanks to Fairweather for organizing, Yoder for playtesting, and lastly thanks to everyone in the Quake Mapping discord.

at 10:47 PM
Email ThisBlogThis!Share to TwitterShare to FacebookShare to Pinterest